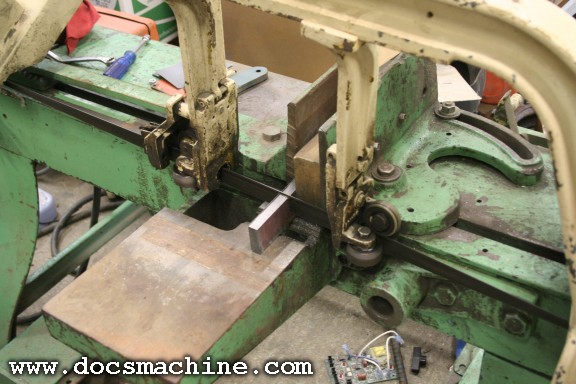 Nichols horizontal mills (or 'hand millers') are a curious beast. They are, for the most part,
designed for production work, running many hundreds or even thousands of identical parts.
Typically, a factory (in the days before unbiquitous CNC) would have rows and rows of them,
each set up to make a single cut. A part would be moved though each machine in sucession,
eventually arriving at the far end a completed piece.

So the Nichols has, most often, a "fast action" lever for the X-axis of the mill table.
This lever works a rack and pinion assembly, rather than the usual leadscrew arrangement
a more conventional mill might have. Some- though not all- have both; handwheels turning leadscrews,
and the rack-and-pinion lever. Mine is the "toolroom" version, which has the larger table, three T-slots,
the vertical head mounting ring (still looking for a head) and both the lever and leadscrew handwheels.

To switch from one to the other, the factory made the leadscrew nut easily removable.
It is, in fact, half a nut, bolted to the saddle, with the leadscrew restrained by the channel
it rides in, on the underside of the table. To switch to the rack and lever, you unbolt and remove
the half nut. An easy and quick process. My mill, however, arrived without that nut.

The leadscrew appeared virtually unused- it may, in fact, never have been used, with most
of the machines' life spent on the production floor using the hand lever. As such, I was obliged
to replace it (the nut) so that I could use it as a conventional mill again. This part is virtually unobtainable
on the used market (few mills came with them, and they're relatively fragile cast iron) and Nichols
was bought out many years ago, so factory parts are similarly rare and expensive.