The movie Clockstoppers (Nickelodeon, 2002) features both a paintball store and paintall guns.
Warning: some spoilers. 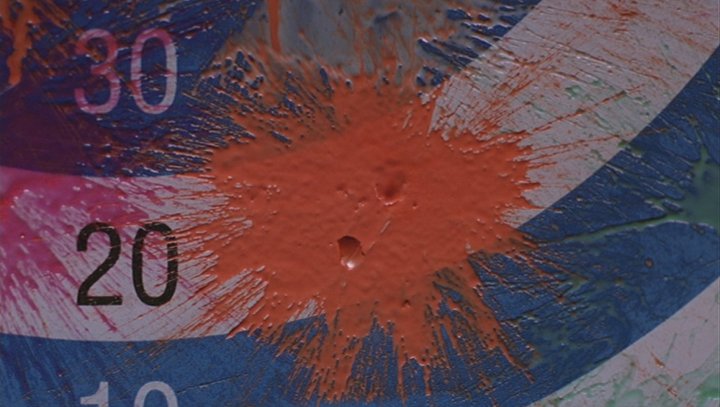 The first appearance of anything paintball-related in the movie is... a paintball hit on a target. 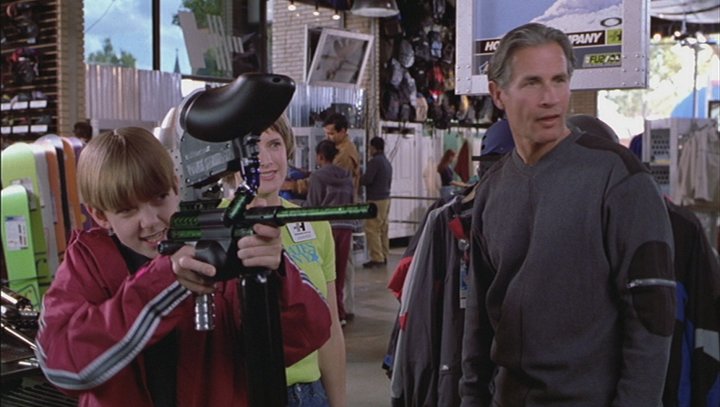 The target is apparently located in the middle of an upscale sporting goods store, where there's virtually no protection
given to other customers. :)  The marker is a Kingman Spyder Special Edition, with a vertical 9-ounce CO2 tank and
a slightly crooked Viewloader Revolution. Note the odd round, grooved handgrip and molded plastic trigger cover. 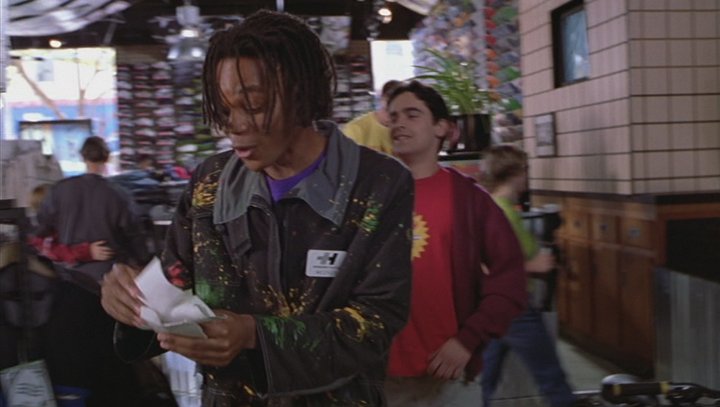 Here we meet Meeker (Garikayi Mutambirwa) who apparently works at the store- and who, for some reason, has multiple
paintball splats all over his jumpsuit. Does this place also have an indoor field? 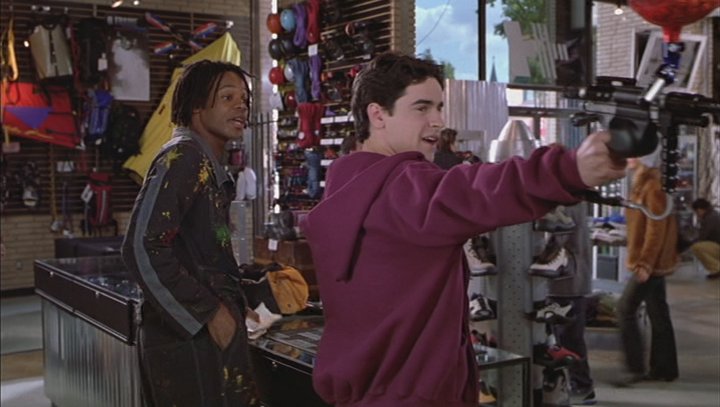 As they're talking, Zak (Jesse Bradford) picks up another apparently loaded, gassed-up Spyder that was just left laying
around on the counter, and takes aim at the nearby target. Note, again, the odd cylindrical grip and plastic trigger cover. 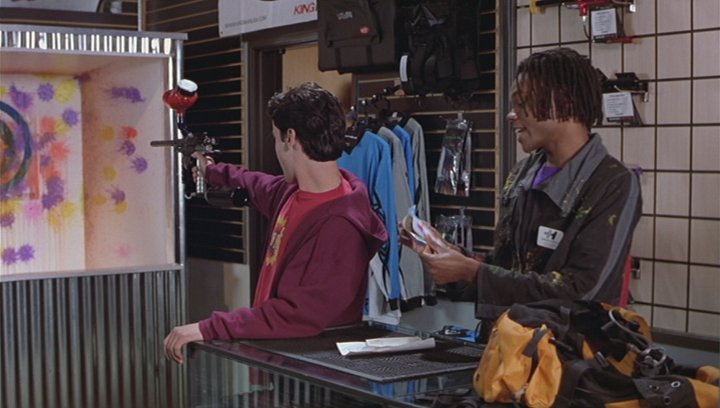 And pop! He manages to hit the target that must be at least eight to ten feet away. :)
While that would make for a cool test target for a store, it would have to be set up
so no stray shots could potentially endanger other customers. 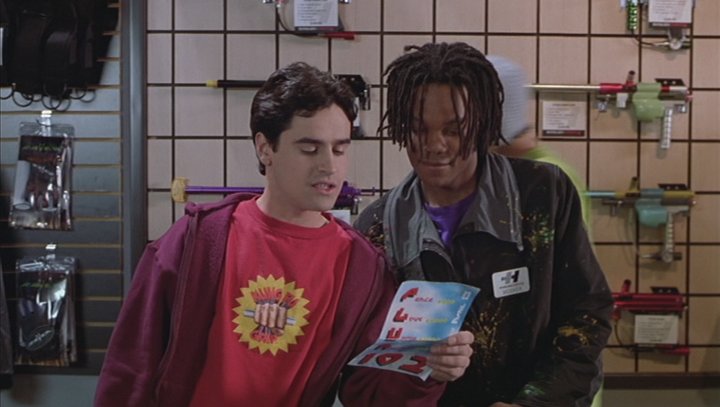 The wall behind the pair is covered with even more markers- virtually all of which are
Kingman Spyder Special Editions. Note the middle two also have the odd cylindrical grips. 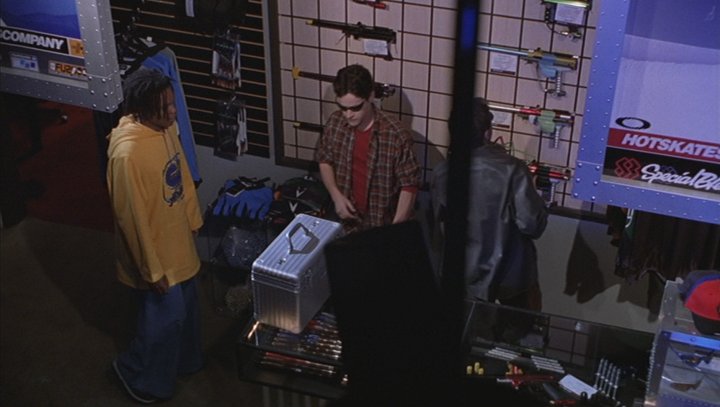 Later, as they raid the store at night for stuff to build their weapons, we see the same array of Spyders, and another
red one in the glass display case along with a selection of what are probably bolts and barrels. 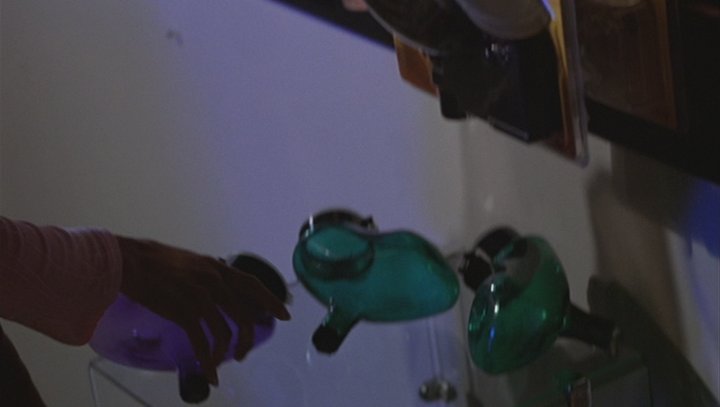 Francesca (Paula Garcés) grabs several clear, blow-molded plastic loaders.
Another Revolution can be seen in its packaging on the wall above. 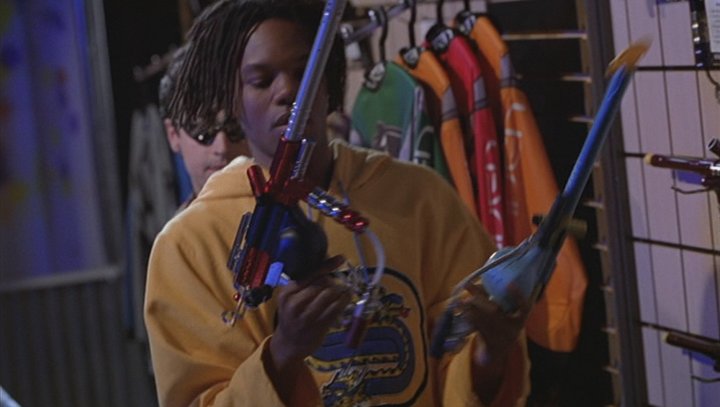 Meeker carries off two more Spyders, and we even hear him test-firing them, despite neither one having a tank.

In the workshop, Zak starts combining the markers into a super gun, starting, as shown here, by removing the
decorative Special Edition barrel shroud. :) 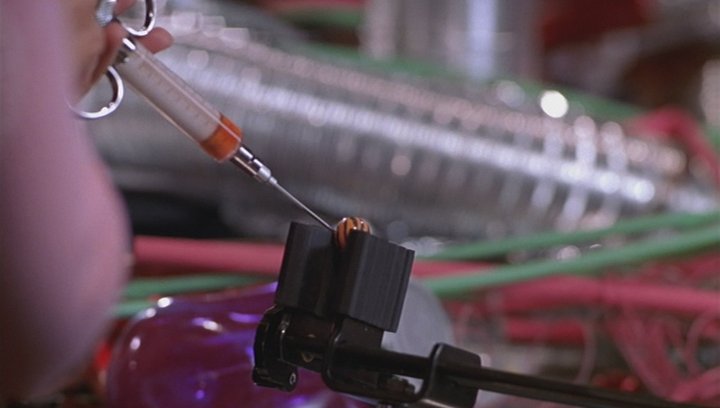 Meanwhile, Dr. Dopler (French Stewart) and Francesca are making their special ammo:
First, use a syringe to remove the paint from a Tiger Stripe paintball... 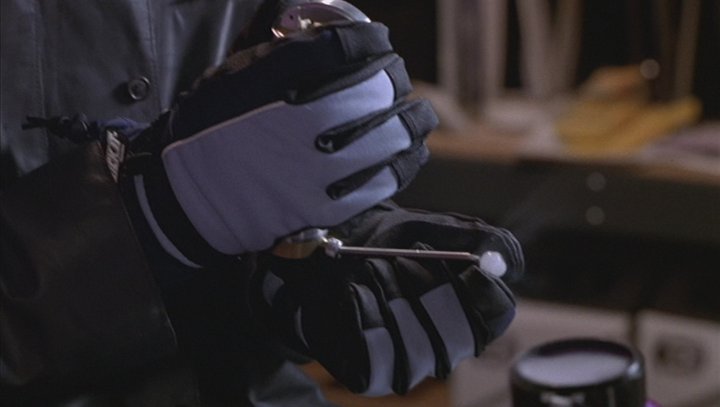 ... And then fill it with liquid nitrogen. The idea is that the liquid nitrogen "freezes" people who are in "hypertime",
back to "real time". (It makes sense in context.) 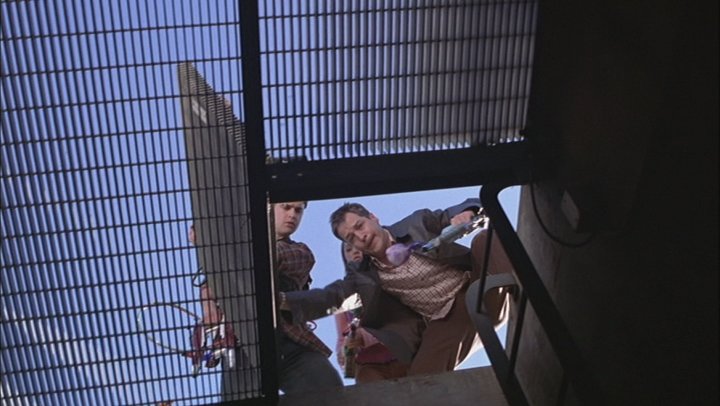 Once prepared, they break into the facility- there always seems to be a back way in. 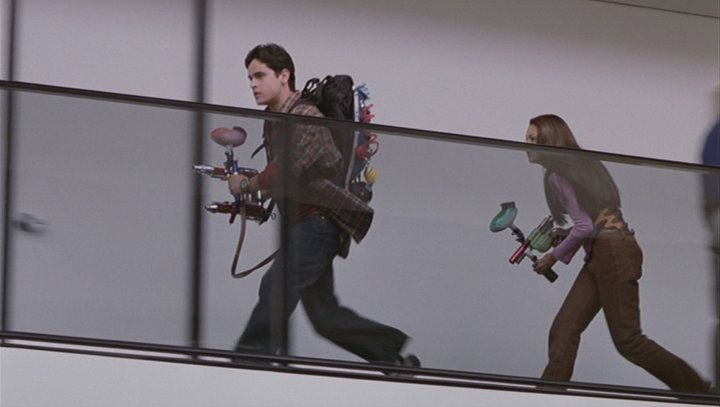 The computer detects their "unauthorized hypertime", and sounds an alarm. Note Zaks' giant backpack assembly
and over-under double gun made out of two Spyders. 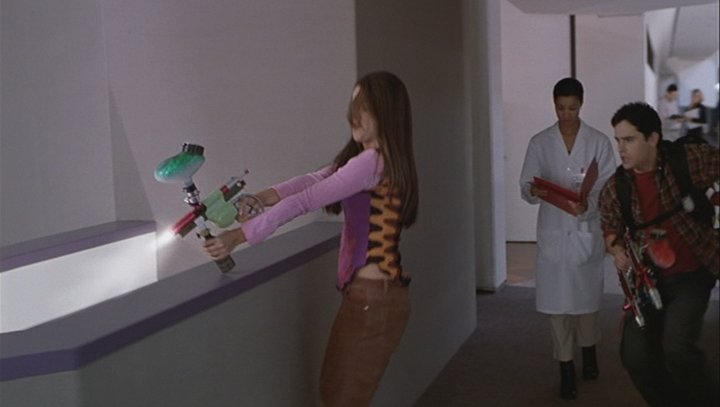 Francesca comes up to a stairway, and pretty much without warning starts blasting away at somebody.
Note the 3.5 ounce tank and convincing "frost" effect on the loader. The smoke/flash is digitally added. 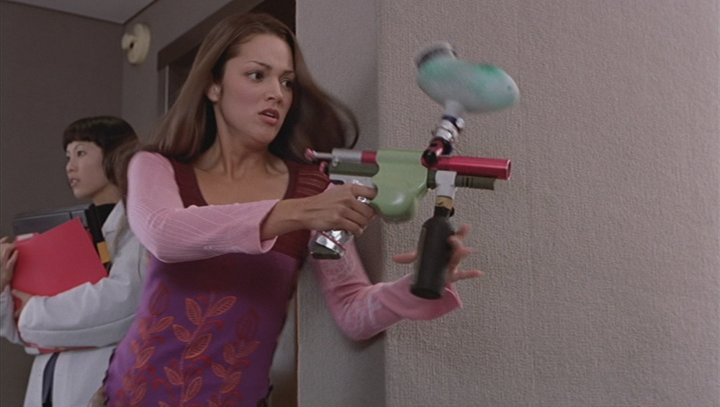 She crosses to the other side of the stairs, and blasts some more.  I wonder why the hand grip is covered in tinfoil? 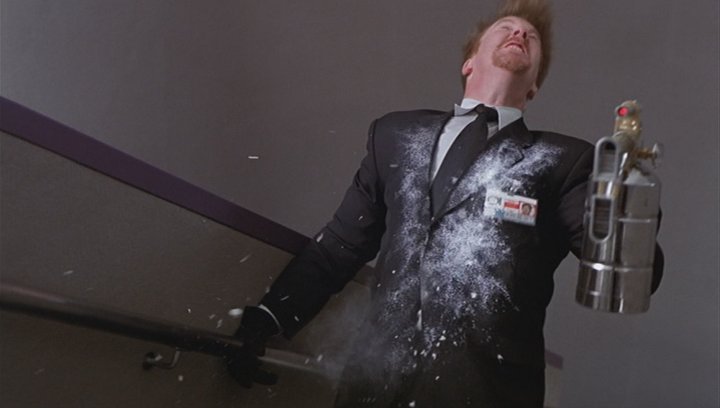 Their target is Stair Goon #1, with his laser-sighted spraycan of liquid nitrogen. Apparently those N2 balls hurt? :) 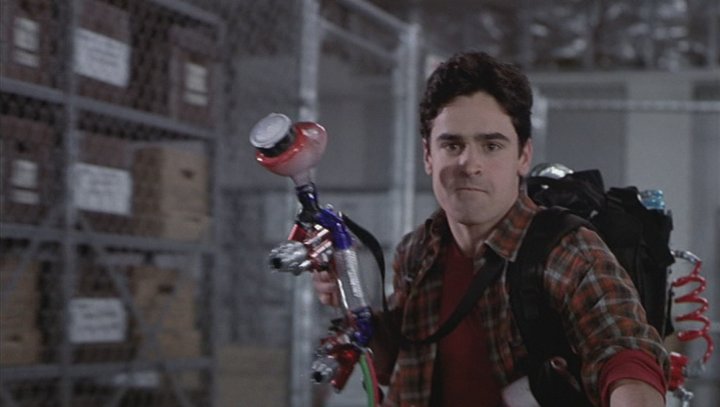 After a daring bike chase through the labs (again, makes sense in context) Zak uses his super-gun for the first and
only time, to subdue Elevator Goon #2, who he then uses to pass the elevator's retina scanner. 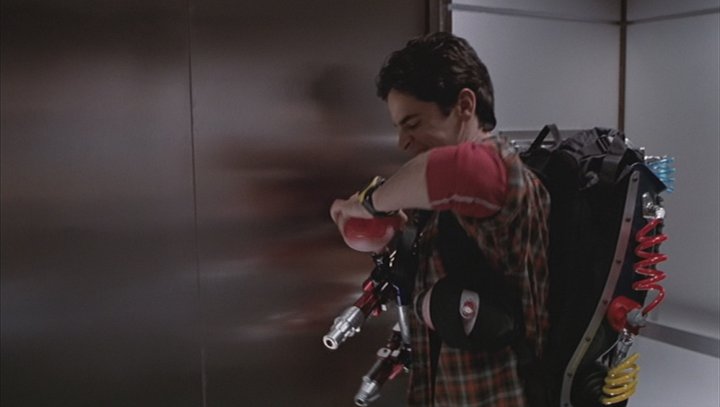 Inside the elevator, Zak removes the apparently already-empty hopper (despite having fired maybe six shots so far.) 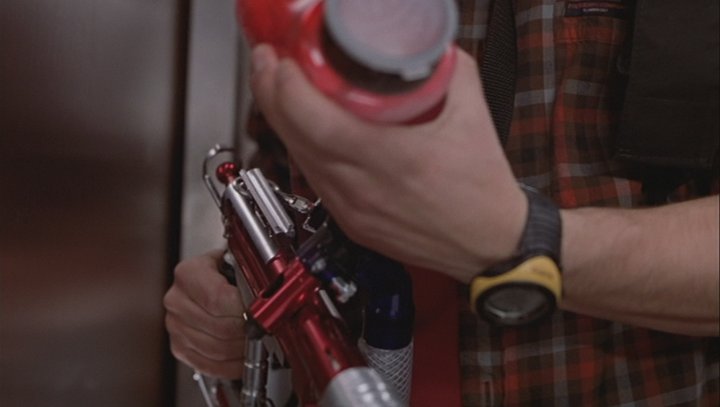 He replaces it with another from a pouch on the backpack strap. He rather accurately portrays the hoppers as
being very cold as he does so. 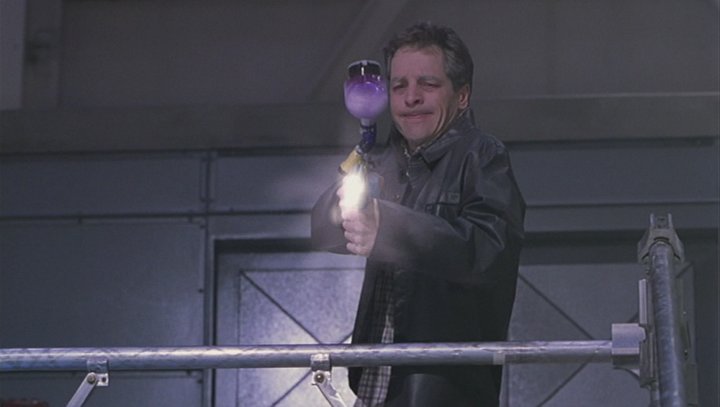 And finally, Dr. Dopler pops a few at the bad guy, despite that particular gun not having a tank.
The 'flash' is again digitally added, as are most in the movie.