The Simpsons episode "The Father, the Son, and the Holy Guest Star" (season 16, episode 21) has Bart playing a game of religion-themed paintball. 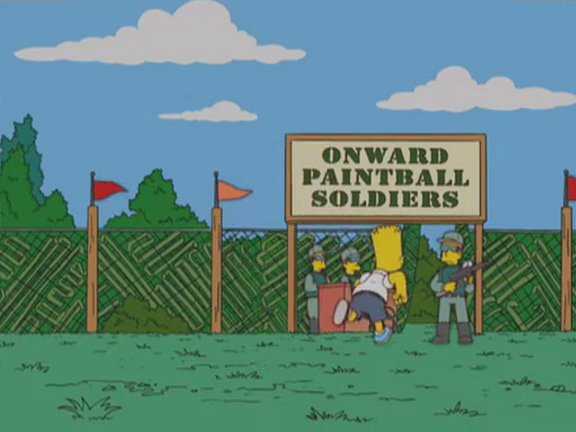 While at a Protestant Youth Fair, Bart (voiced by Nancy Cartwright) spots a paintball field and rushes off to play. 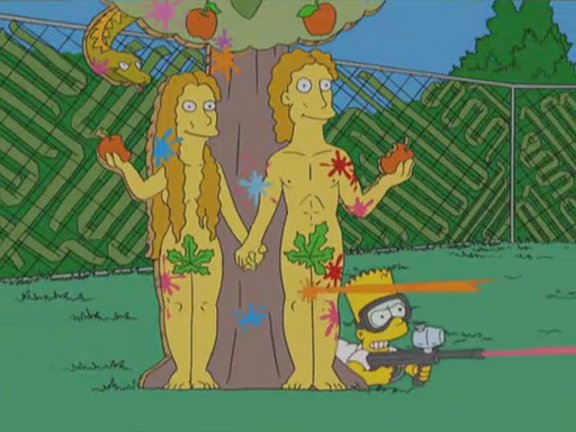 Inside, the barricades are cut out into religious themes. And because this is the Simpsons,
of course, Adam here gets hit in the fig leaf at least three times. Bart's gun is drawn to somewhat
resemble a Tippmann Model 98, though with an A5 style hopper. 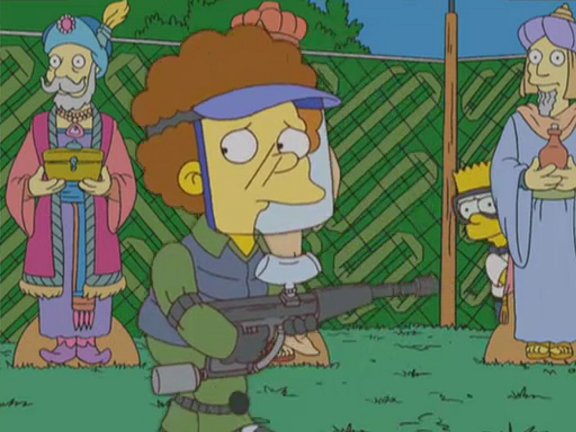 Todd (or possibly Rod) wanders about looking for Bart. 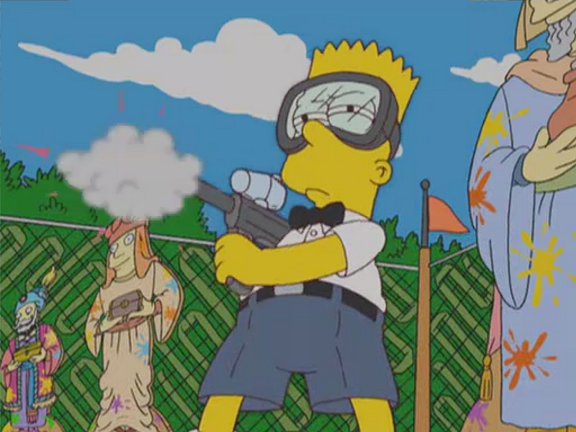 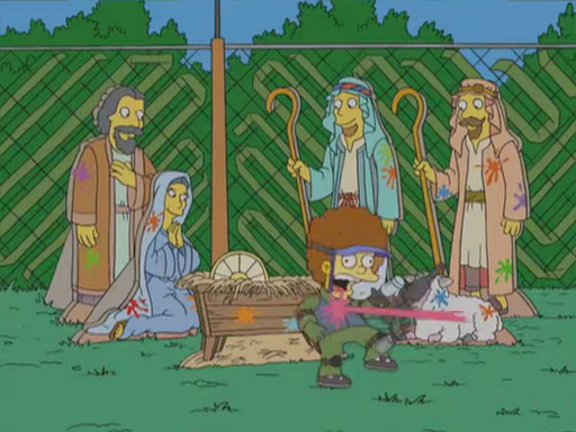 The impact of which... 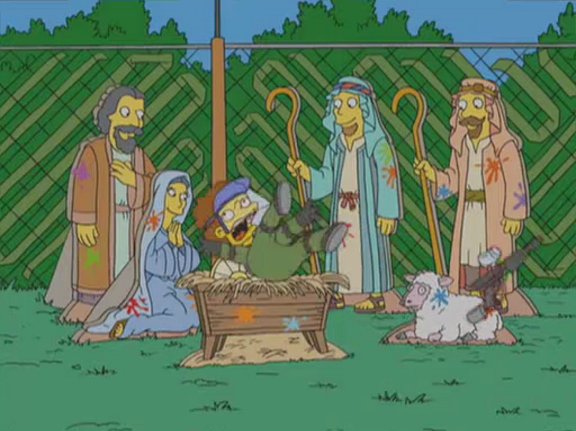 ... Is of course powerful enough to throw Todd backward several feet where he lands behind the manger. 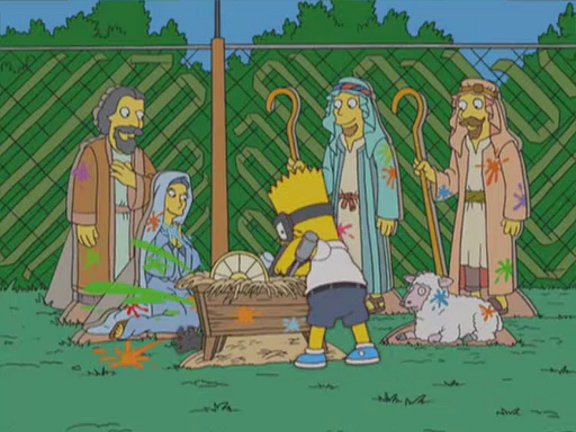 At which point, since this is still the Simpsons, Bart runs up and "finishes off" Todd with
multiple close range, point-blank shots. (Note the multiple colors spraying off to the side.) 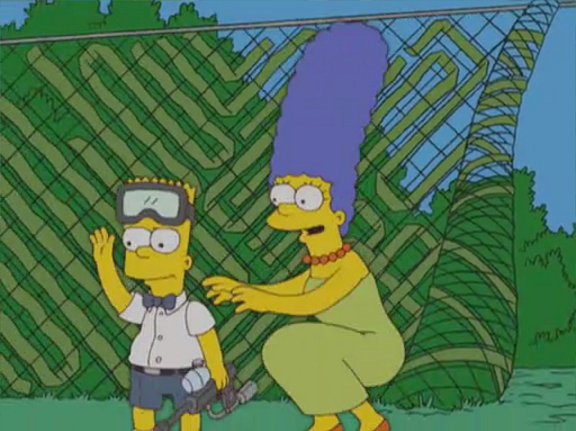 Marge (voiced by Julie Kavner) is happy to see Bart has... renewed his enthusiasm for violence? 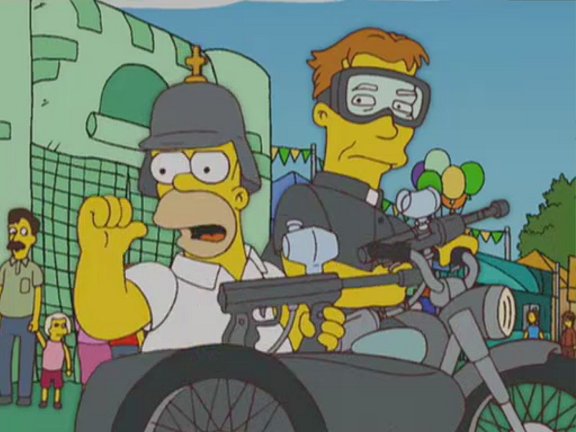 Just then (it makes sense in context) Homer (voiced by Dan Castellaneta) and Father Sean (voiced by
Liam Neeson) rush in on a sidecar motorcycle to try and take Bart back to their religion. How they knew
Bart was playing paintball, and why they're carrying their own paintball guns, we'll never know. :) 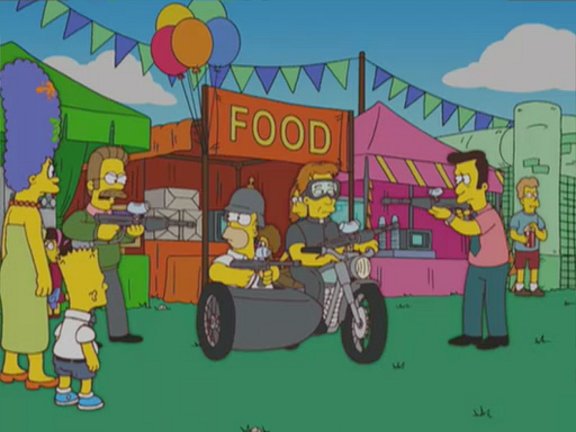 Ned Flanders and Reverend Lovejoy (both voiced by Harry Shearer) appear in order to
stop the pair from taking Bart. Where they got the paintball guns is similarly unexplained. 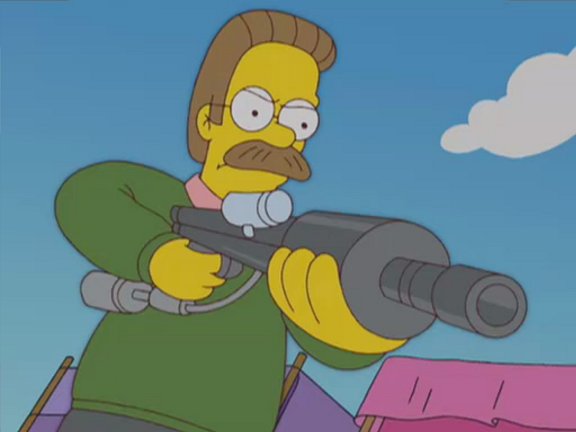 In a mexican standoff, all four point their guns at each other and menacingly cock them- by
pumping them like shotguns, complete with the usual Simpsons metallic "ker chink!" sound effect.
Bart, however, manages to calm them down a moment later.