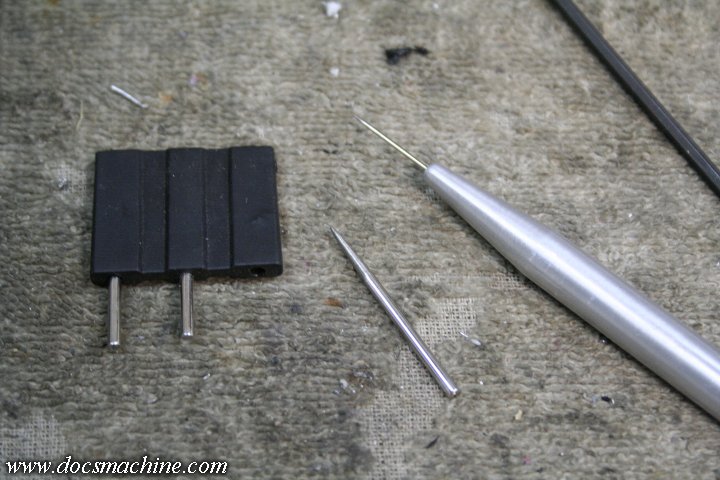 Those needle scribers came out great, and have been quite useful already, but have also proven
to be just a little too light for my needs. The needle is just a little too flexy for certain things,
so I've been looking into other options.

In a thread on the Tinker's Guild, someone suggested steel dart tips, and shortly thereafter,
a chance encouter with a buddy of mine led to him giving me a set of used tips. 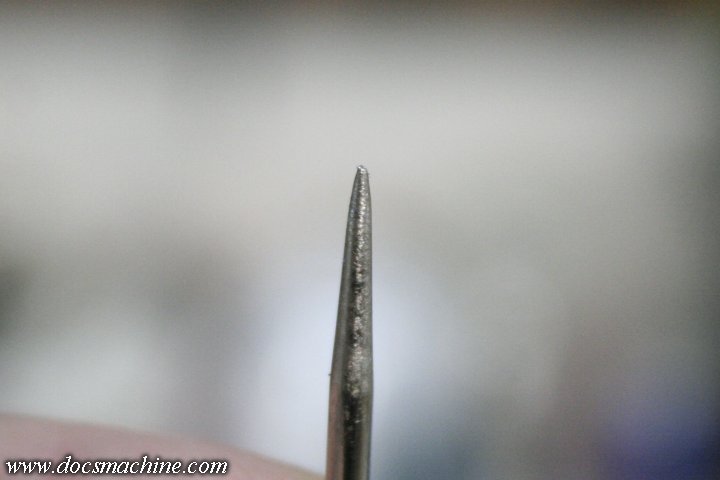 Now, one of the reasons they were free was, of course, that they'd been used.
And in use, of course, the dart aficionado would occasionally strike one of
the wires that makes up the scoring pattern of the dartboard. 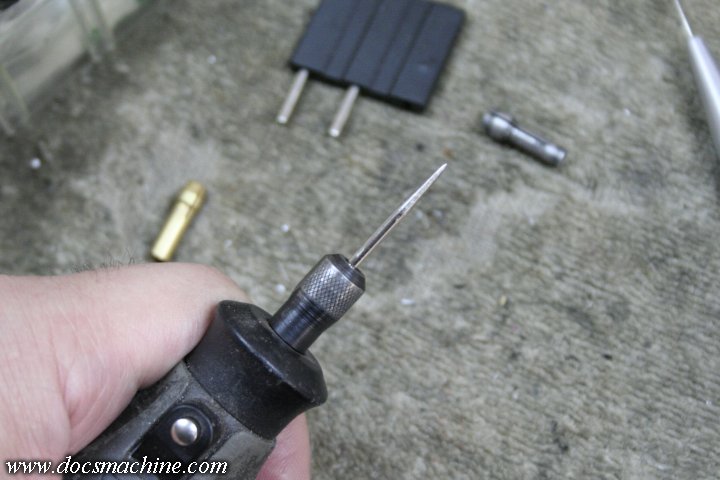 That's not a huge issue, because most of the shape is there, it just needs to be refined.
That's easy enough to do with something spinny like a drill, and a belt grinder that I
just happen to have. The problem is that I'd like to have a nice shallow angle to the grind,
and a standard drill would have too big a chuck to let me get a low enough angle.

After many moons of pondering, unanswered letters to various YouTube celebrities,
and some leftover hallucinogens, I figured a Dremel would be ideal. Tiny chuck,
small diameter body, etc. Except the dart tips are about 0.091", and the standard Dremel
collet is 0.125". Luckily enough, rooting through my stash of Dremel parts, I found an
undersized collet I think originally intended for the tiny diamond engraving bits (the bits
that use diamond to DO the engraving, not bits used to engrave diamonds)
which happened to hold the dart thingy just right. 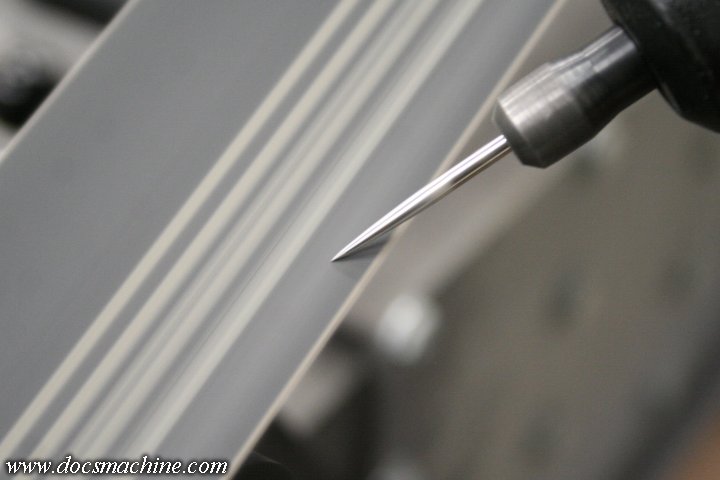 Then, using a 600 grit silicon carbide belt I'd originally gotten to do TIG tungstens
(at which it does an amazing job) and working on a slack portion of the belt, I was able
to very easily and surprisingly quickly dress down a tip to freakin' dangerously sharp. 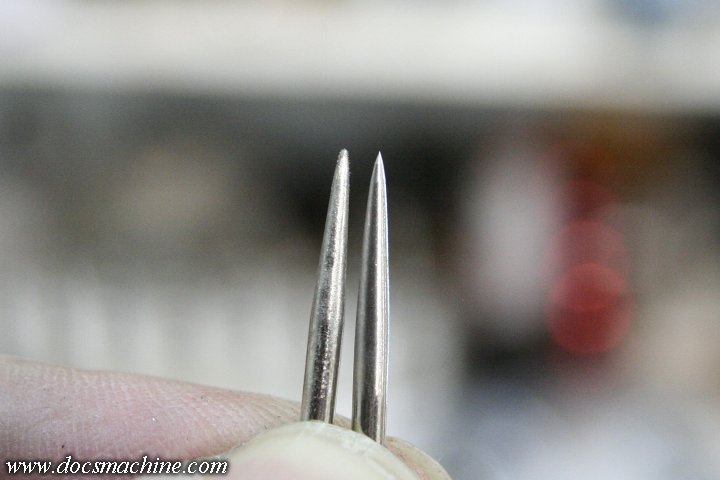 Here's a before and after. I'm pretty sure just the photograph of the one on the right drew blood. 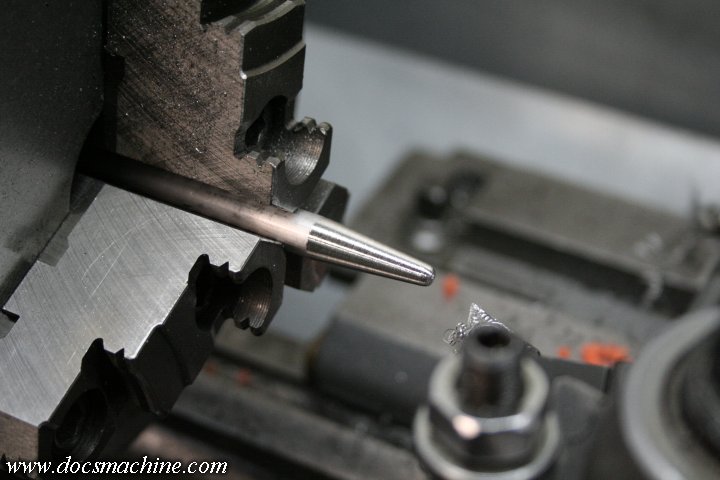 After that, it was a simple matter of making another handle just like I did before... 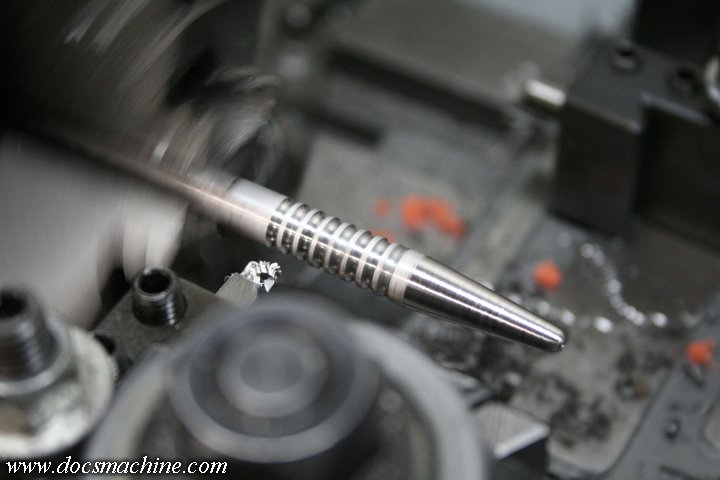 With the added touch of adding in the grippy-grooves as on Clickspring's example. 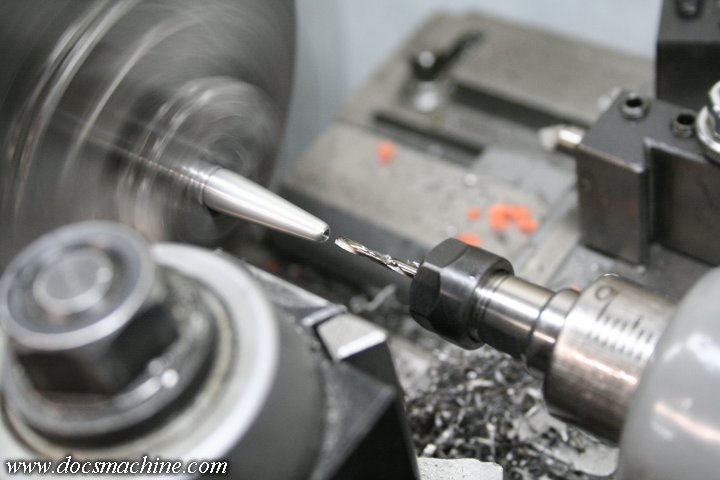 Once sufficiently engroovenated, I drilled the pointy end to receive the pointy bit. In this case,
the dart tip is about 90 thou, or some three times the diameter of the needle I used originally-
and as luck would have it, I had a drill just one and a half thou larger than the tip diameter.

Note the ER-11 collet holder being used. When I drilled the original ones, I noticed that
my chuck doesn't hold tiny drills very well- it's a good Jacobs chuck, but is an older piece and
likely has lots of miles on it. So, immediately after doing the needle scribers, I ordered an
ER-11/Morse 2 holder specifically for the times I need to hold the little tiny bits. (I'm also thinking of
picking up a couple, complete with single collets, specifically to set up some semi-permanent centerdrills.) 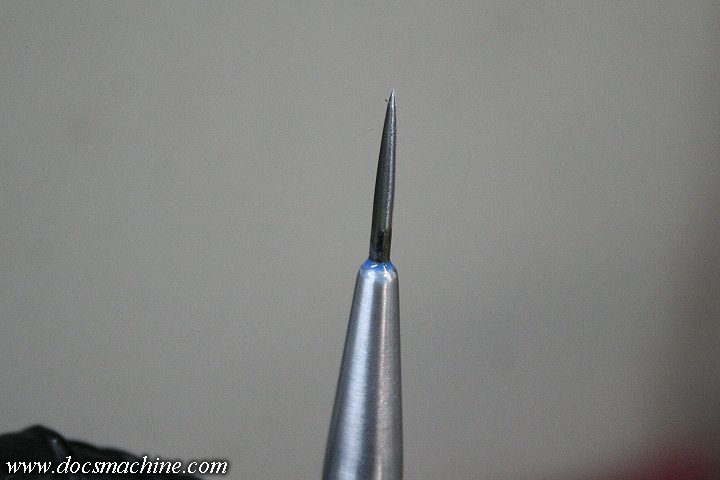 Anyway, just like last time, all that was left was to blow out and degrease the hole and the tip,
and stick 'em together with a drop of Loctite. 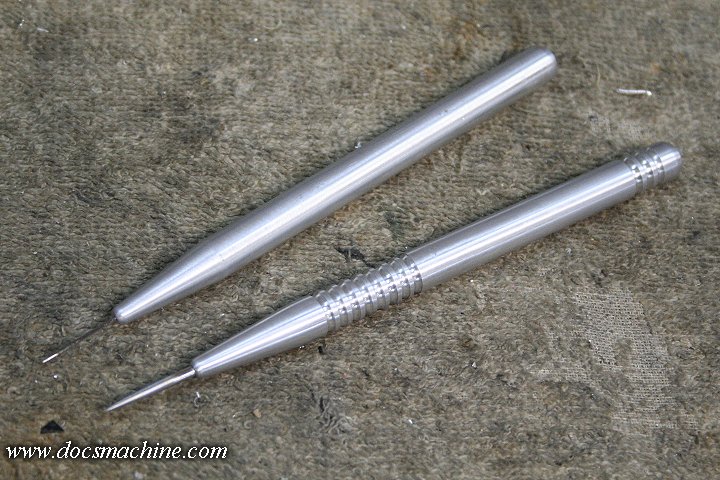 After it had a chance to cure, I tried it out, and I'm pretty sure this is now my favorite scriber.
It's nice and rigid, the point works even in close quarters, and I'm surprised how natural it
feels to hold and use. I think I can call this little project solidly done. This one tip should last
me several years, and I have two more  ready to go- and of course even more
replacement tips, if ever necessary, can be had cheaply and ubiquitously.

All text, photos and graphics Copyright 1998- 2019, Doc's Machine & Airsmith Services. All Rights Reserved.
Information contained in these pages is for reference and entertainment purposes only.  Our methods are not always the best,
quickest, safest, or even the correct ones. It's up to you to know how to use your own machines and tools.
Keep your fingers away from the spinny blades o' death and you should be all right.