The movie Gotcha (Anthony Edwards, 1985) features possibly the first-ever use of a paintball gun in film. 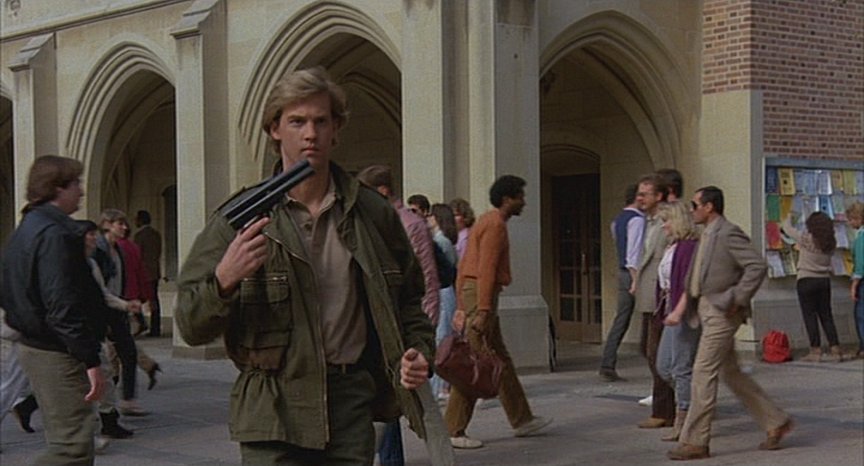 The movie opens with Jonathan (Anthony Edwards) stalking another student across the campus of the University of California, Los Angeles.
(UCLA) As he catches up, he draws a Nelson Nel-Spot 007 from an inner pocket. (In the middle of a crowded campus!) 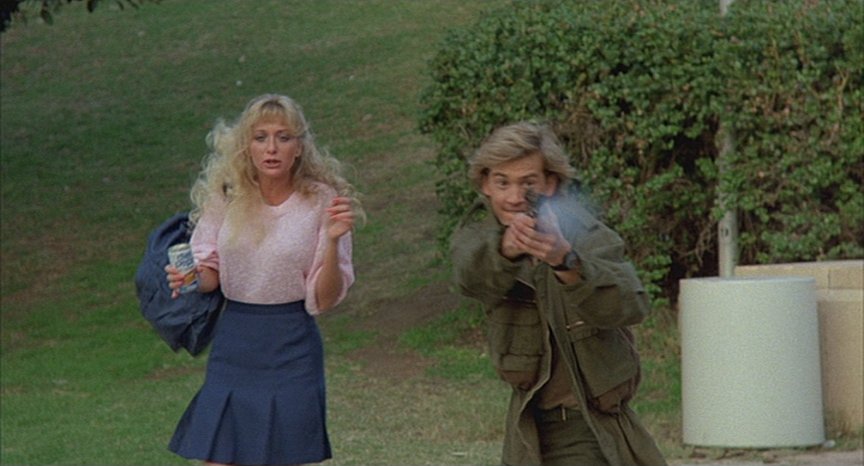 He eventually catches up with his first target at the bottom of a large stairway and fires. (The gun sounding like the typical movie silenced pistol.) 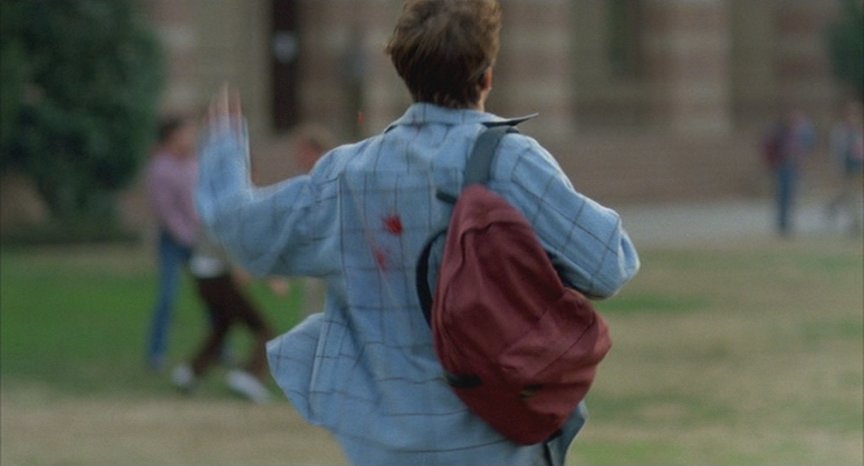 The ball hits, and the target falls down as if shot for real. 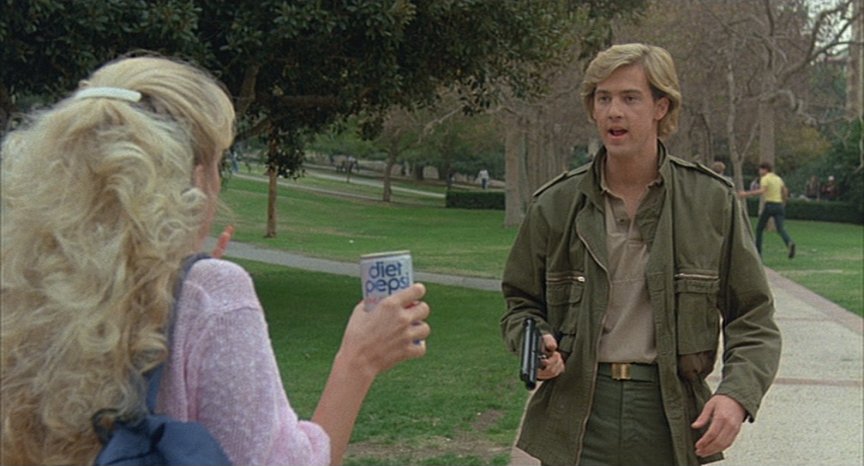 "No, no, it's just a paint pellet". The distinctive cocking knowb of the 007 can be clearly seen below Jonathan's thumb. 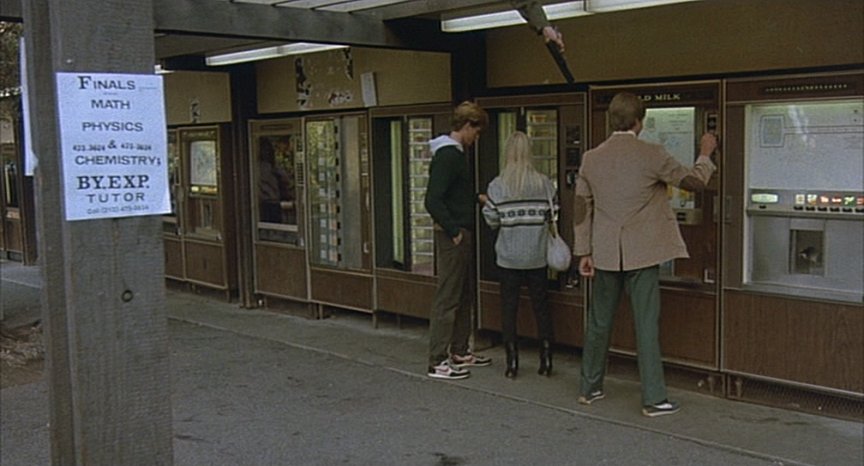 He catches target #2 at a row of vending machines. 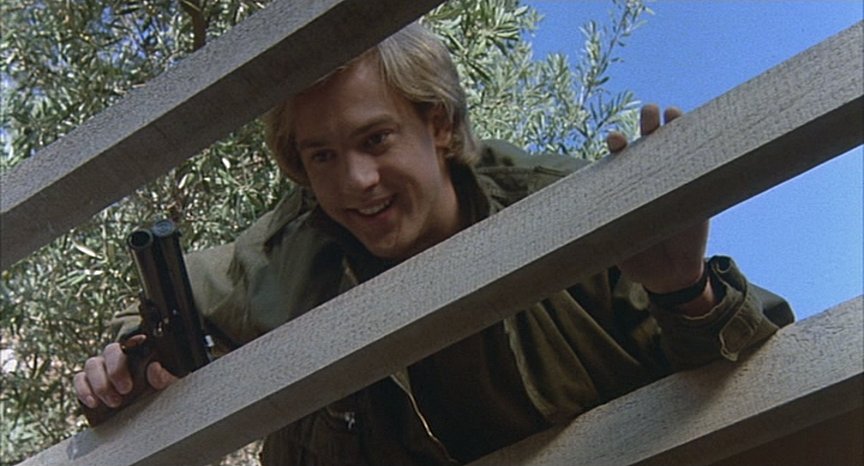 "Gotcha!" Note this is an early version of the 007, without the removable barrel-extension sleeve. 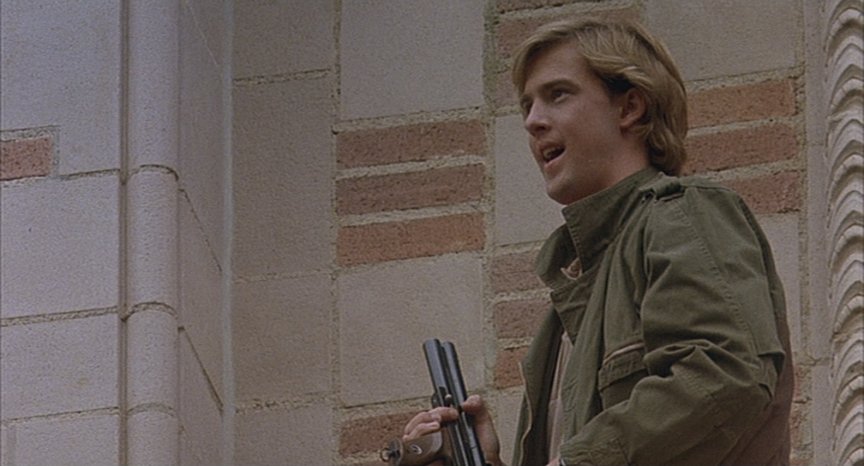 Jonathan then shoots target #3 as the student crosses a catwalk. 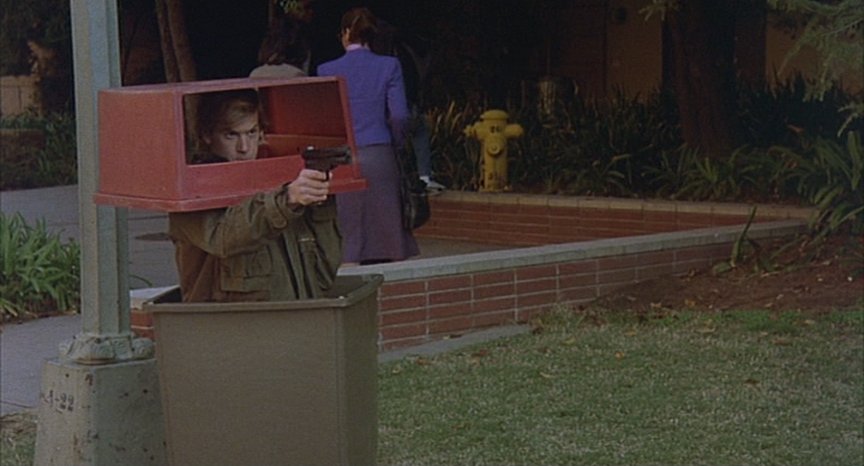 Target #4 rides a bike past a trash can Jonathan has concealed himself in... 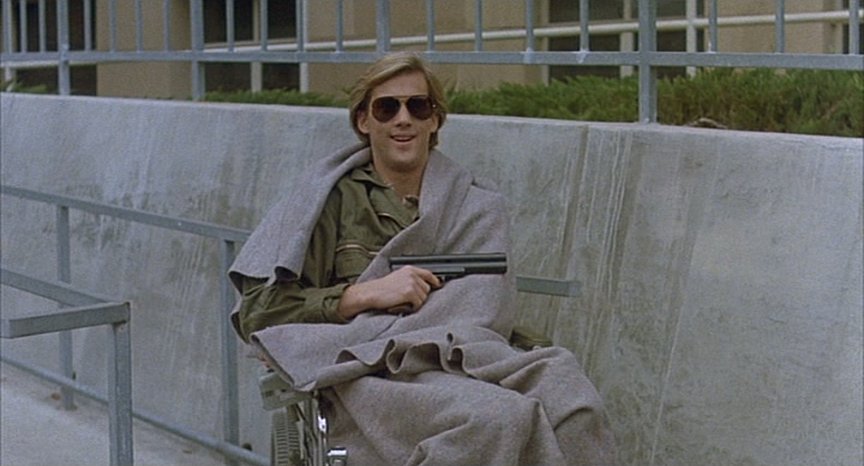 And he catches target #5 by "disguising" himself for some reason, with a blanket and a wheelchair. 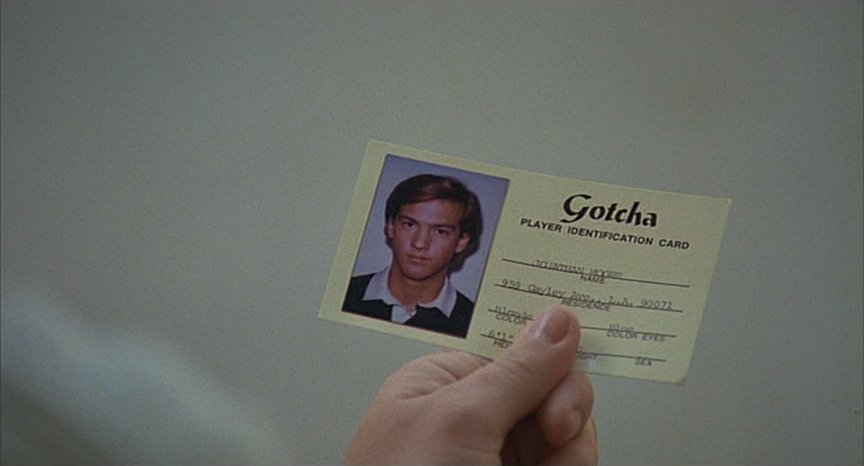 Finally, we see Jonathan himself featured as a target on a "Gotcha Player Identification Card". 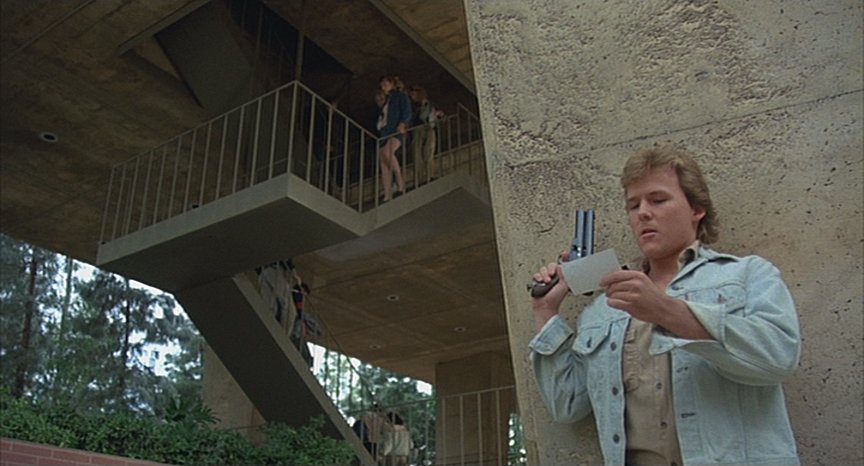 A card held by Reilly (Brad Cowgill) who is laying in wait to ambush him. In the middle of a crowded campus in California,
openly holding a large handgun! 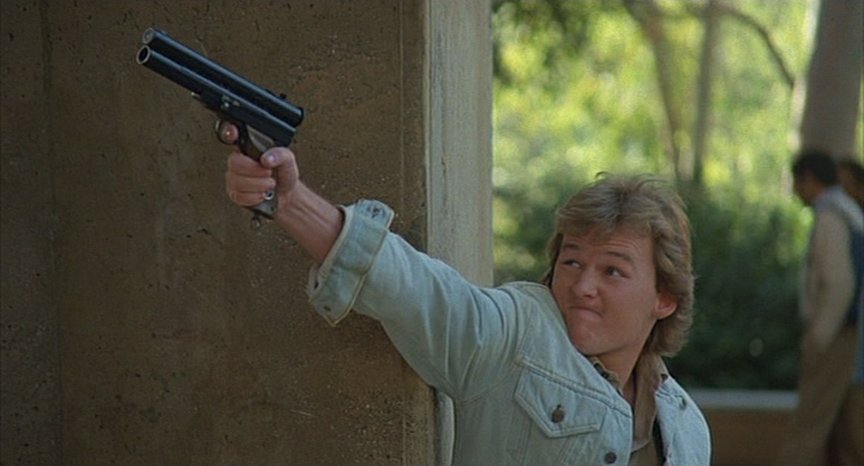 He spots Jon, takes aim and fires. If you look close while watching the movie, you can actually see the hammer move when he fires. 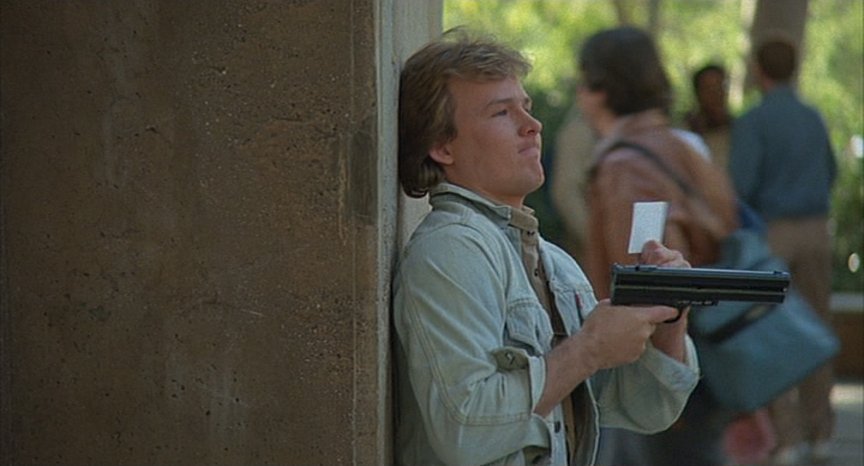 After a narrow miss, he works the bolt to recock the gun and gives chase, but Jonathan loses him in the bushes. 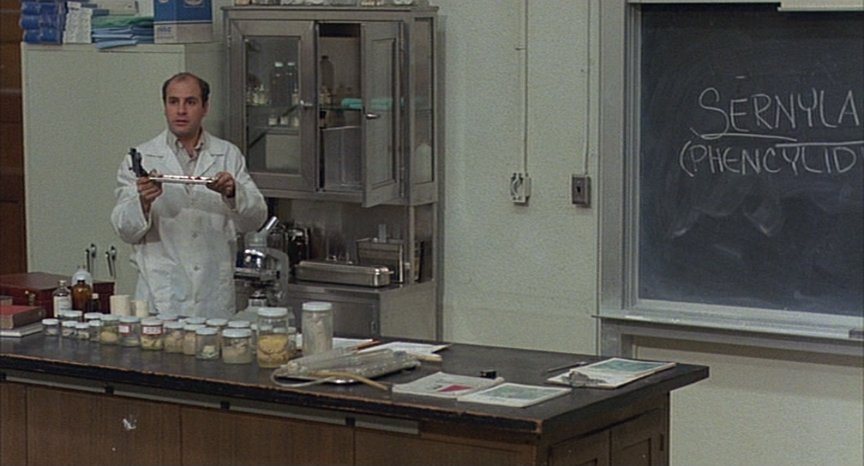 Jonathan and his friend Manolo (Jsu Garcia) then go to class, where they're apparently studying to be veterinarians. The professor (David Wohl)
has a large tiger in a cage for the day's demonstration. The tiger, being ill, first needs to be sedated, so despite the cage being easily small
enough a person could inject the tiger by hand, the professor gets out Chekov's Gun a tranquilzer dart gun, and a tray of darts. 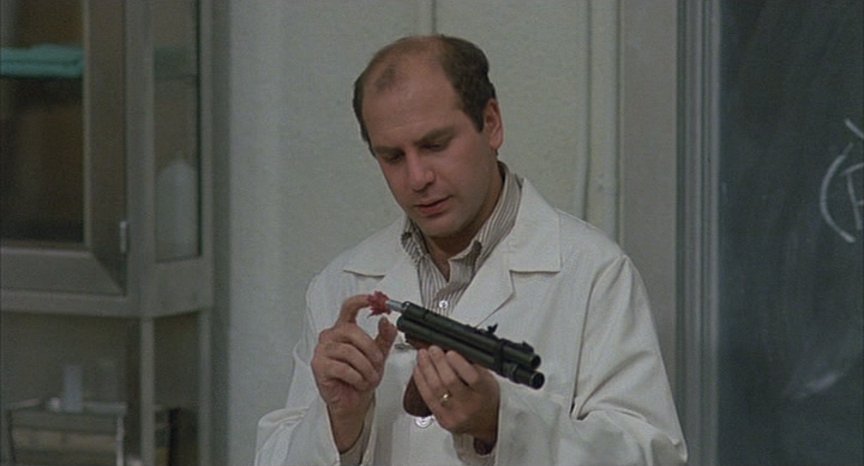 He then demonstrates, quite accurately, how to load the gun, a Palmer Cap-Chur Short Range Projector. An actual tranquilizer dart gun
originally designed and built off of a Crosman M150 CO2 pellet gun. 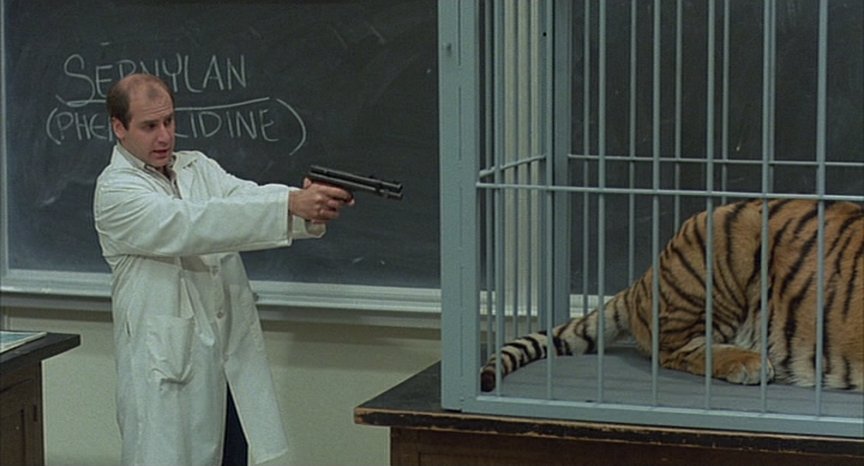 The professor then takes aim from entirely too close, stating you should always aim away from the head. (Yes, that's a real tiger.) 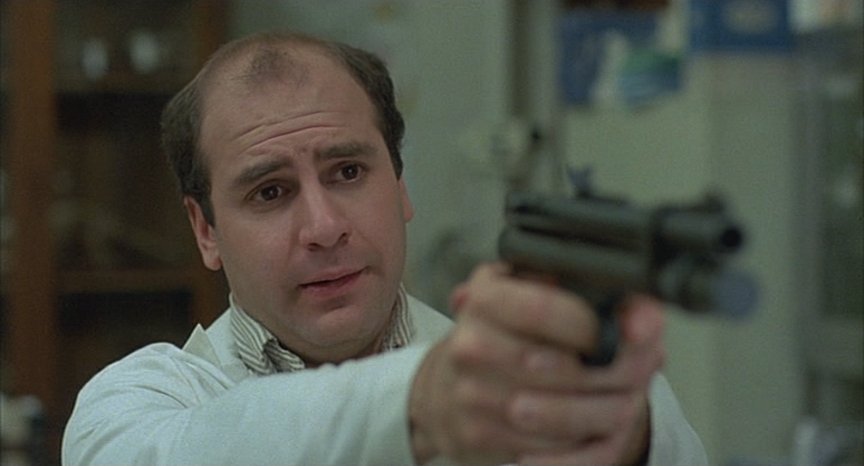 "Go ahead, make my day." (Actual line from this scene. 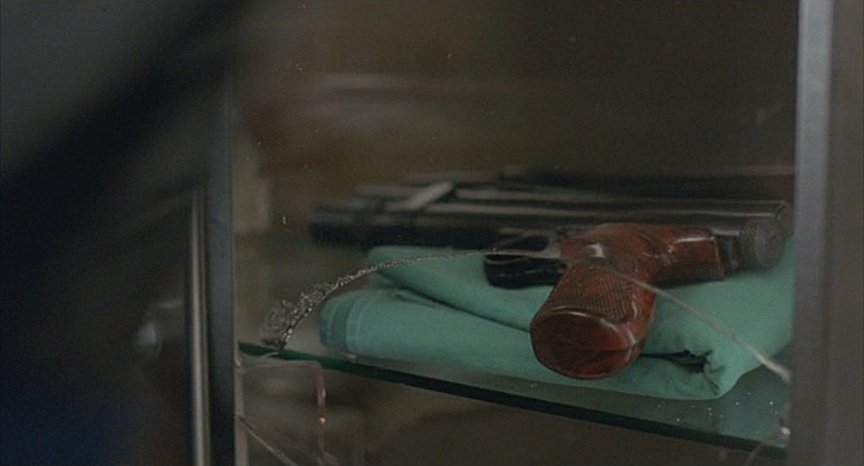 Much later in the movie, Jonathan and Sasha (Linda Fiorentino) are trying to escape some KGB thugs, so they go back to the
classroom and break into the cabinet to get the trank-dart gun and ammo. 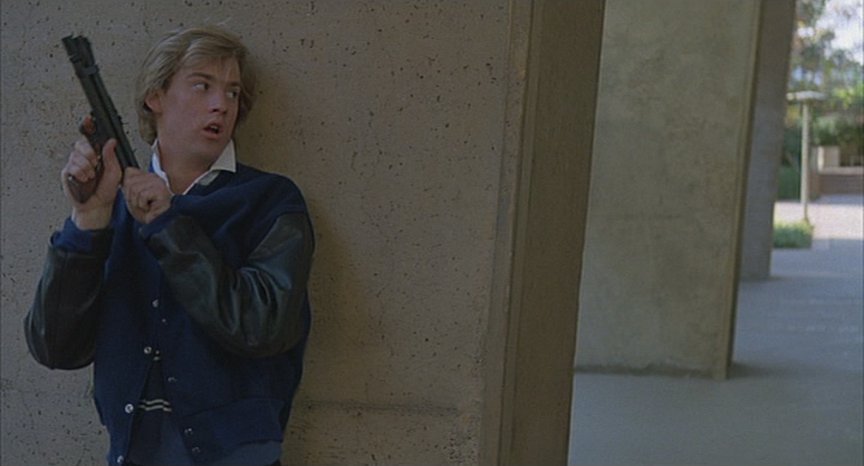 After a short chase, Jon is seen loading and (correctly) cocking the gun, just before shooting the first thug.
(The tranqulizer, of course, acts almost instantly, dropping the thug as if he'd been shot with a real gun.) 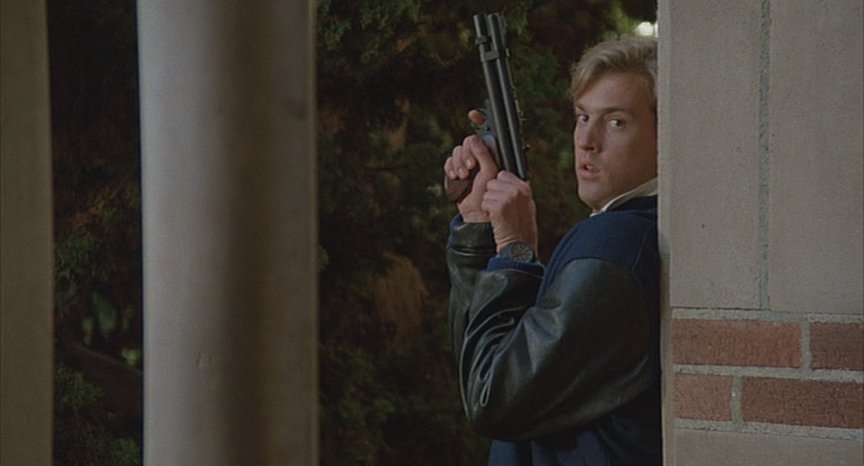 He loads and cocks the Cap-Chur gun a second time, just before taking out the next thug. 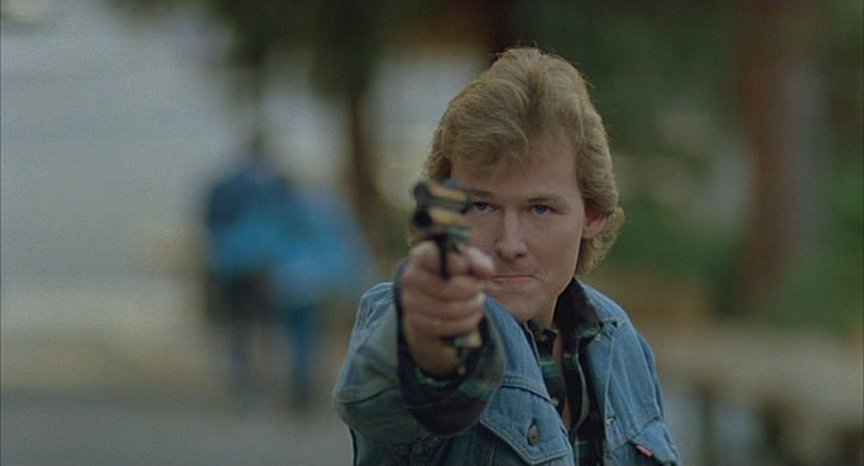 Finally, Jonathan is in a standoff with Vlad (Klaus Löwitsch) who is holding Sasha at gunpoint. Just then, Reilly, who happens to be
walking by, spots Jon, pulls out his Nel-Spot and shoots. 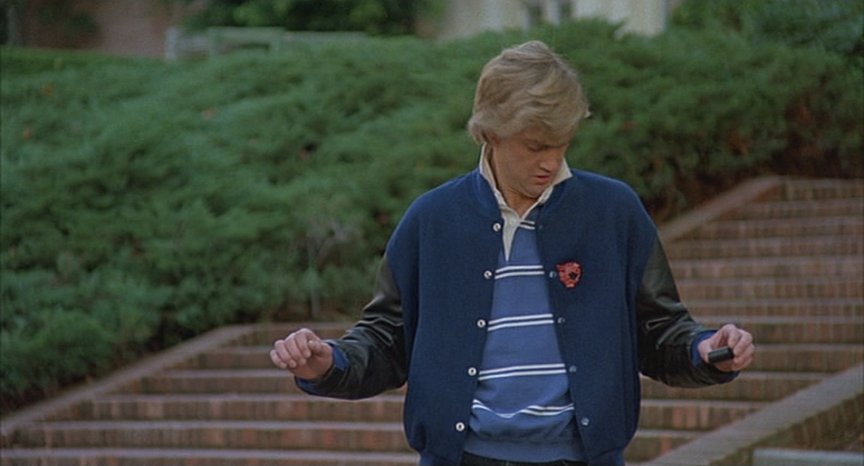 Jonathan takes a ball in the chest, which distracts Vlad long enough for Sasha to pull away. Jon falls and makes a quick grab for the trank gun... 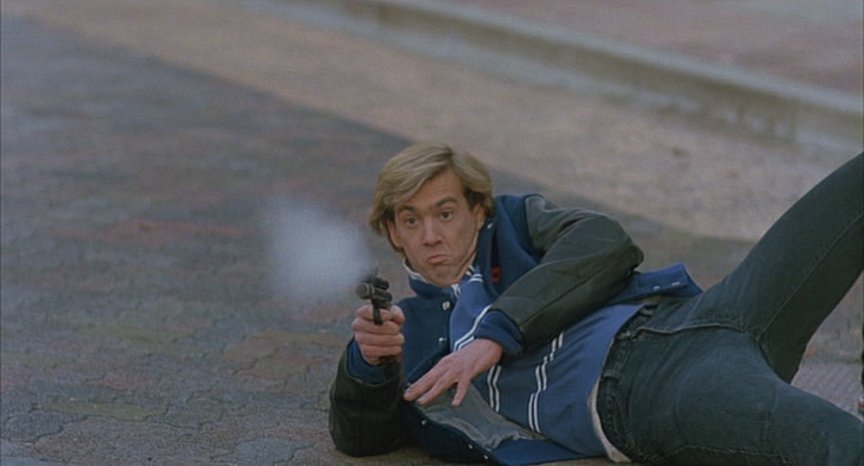 ... And shoots Vlad in the chest, who drops like a rock.