The According to Jim episode "Paintball" (season 3, episode 10) features the family going to a paintball field for a little bonding. 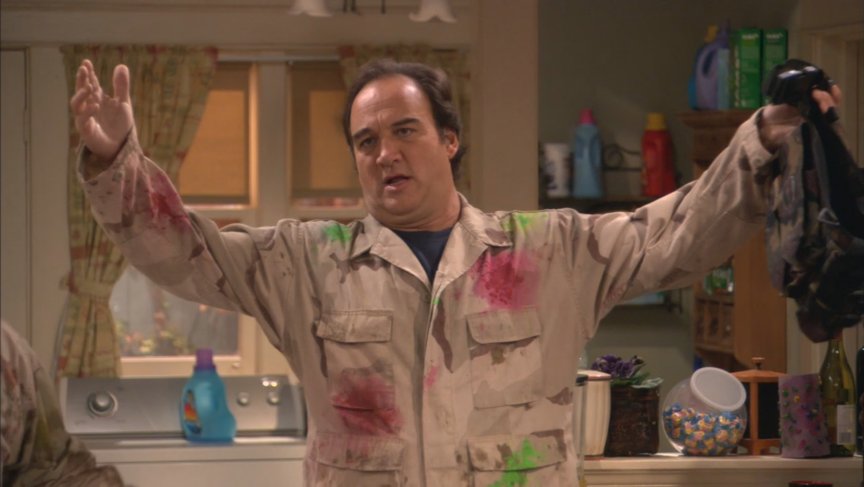 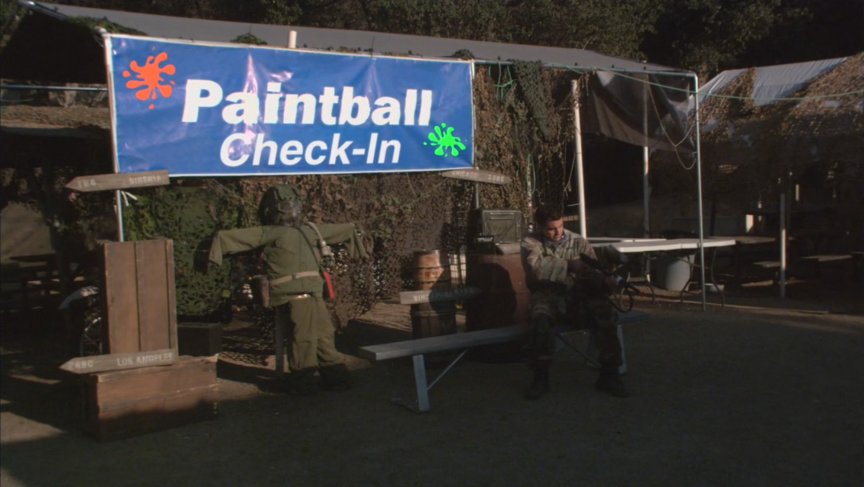 Jim and Andy eventually convince his wife Cheryl (Courtney Thorne-Smith) and her sister Dana to accompany them on an outing. The field
appears to be an actual paintball establishment, but has clearly been "gussied up" by the producers, with the addition of camouflage netting,
the streotypical "distance to home cities" signs, oil drums, ammo crates, and so on. Here we see random walk-on #1 randomly aiming his
marker in the check-in area. 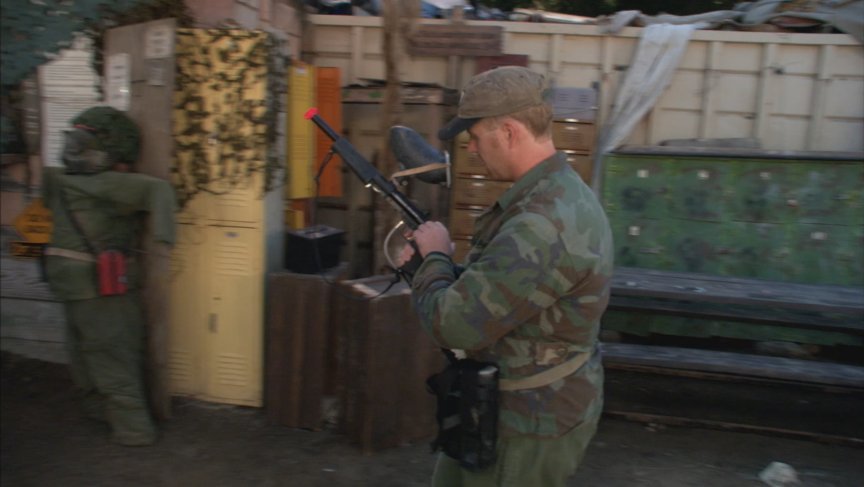 We follow that by following random walk-on #2 as he idly checks the cocking knob on his Tippmann Pro-Carbine.
The marker carries a bright red APP barrel plug and a Viewloader VL-200 hopper, fitted with a mod common
to rental markers- an elastic strap used to help secure the hopper lid from popping open. 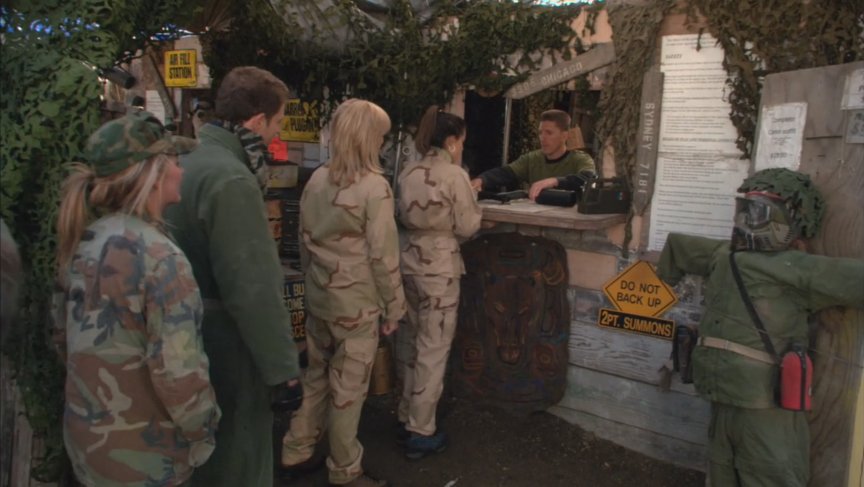 We then see Cheryl and Dana at the check-in counter, getting their equipment issued. Notable in this scene, we catch a brief glimpse of the
one and only pair of actual paintball goggles seen during the entire episode, in the JT X-Fire helment on the dummy on the right. 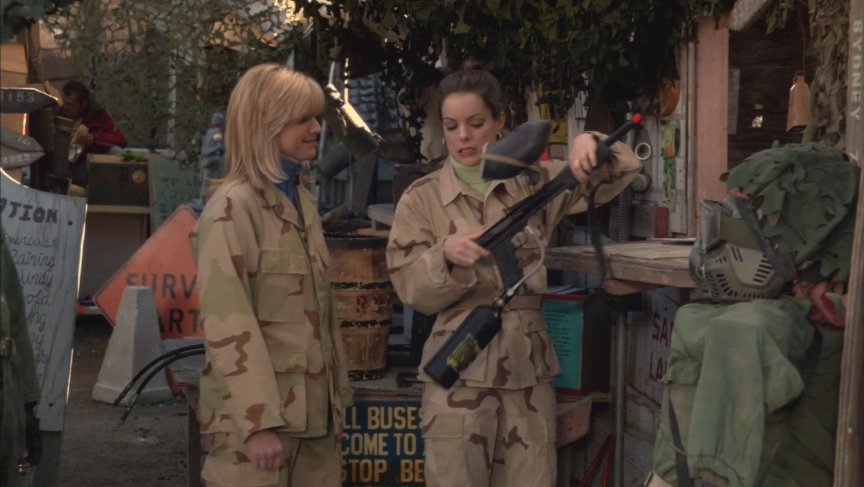 Dana is given another Tippmann Pro-Carbine, and asks if they have something "a little less... gunny". 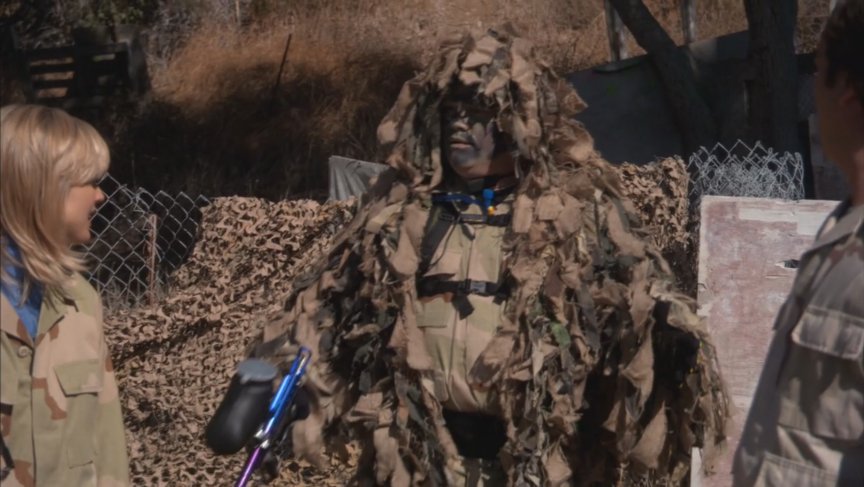 A few moments later, Andy emerges from hiding, outfitted in a fairly effective ghillie suit- including a Camelbak style canteen and comm
headset- and carrying a lightly-modified Kingman Spyder Agressor. 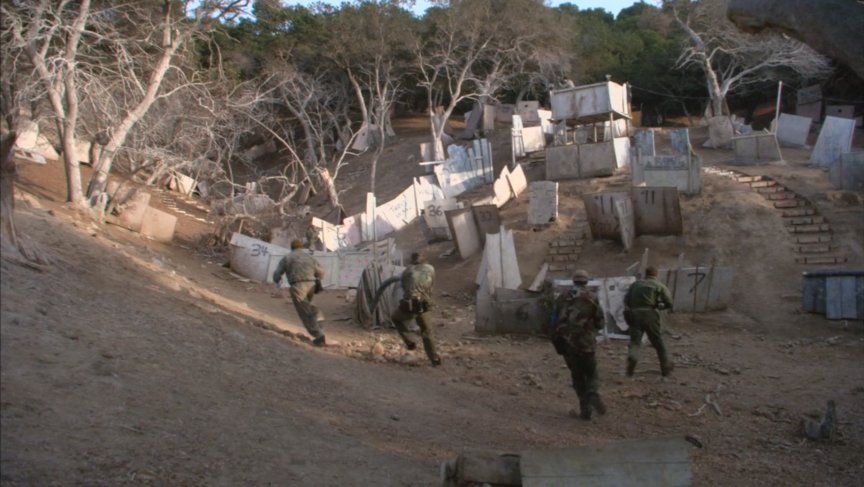 Here we get a good view of the playing field, which is clearly an actual established field. If anyone knows where this is,
let us know and we'll be happy to provide a link to the site. 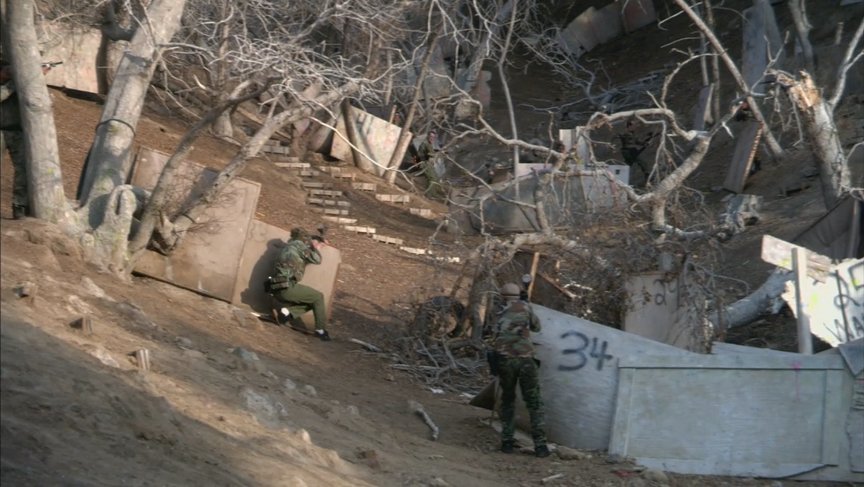 The game play itself, however, is clearly staged, as no player is seen wearing anything close to actual paintball goggles, let alone a proper mask.
Most are shown simply wearing simple shop goggles, if not just safety glasses- which is typical for a TV show, since, of course, viewers have
to be able to see the actors' faces. 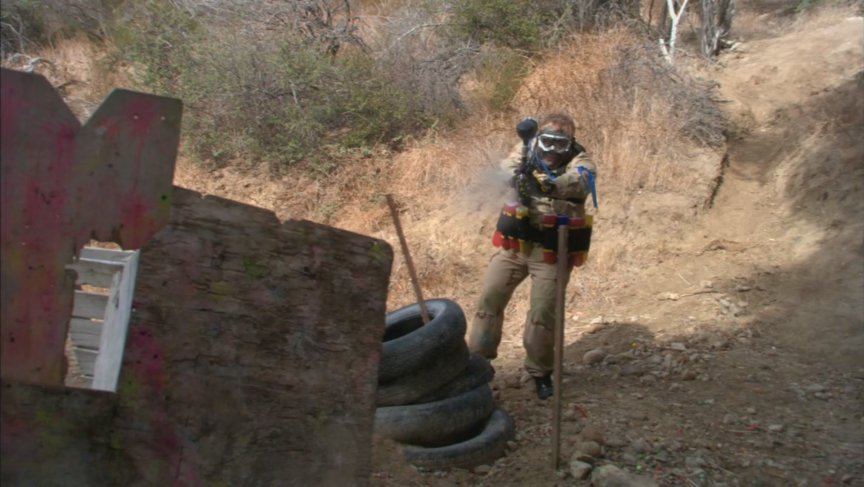 Suddenly, Andy appears out of nowhere, minus his ghillie suit, but now wearing a huge bandolier with a large number of empty pods
velcroed on, and wearing a pair of Oakley Wisdom ski goggles. 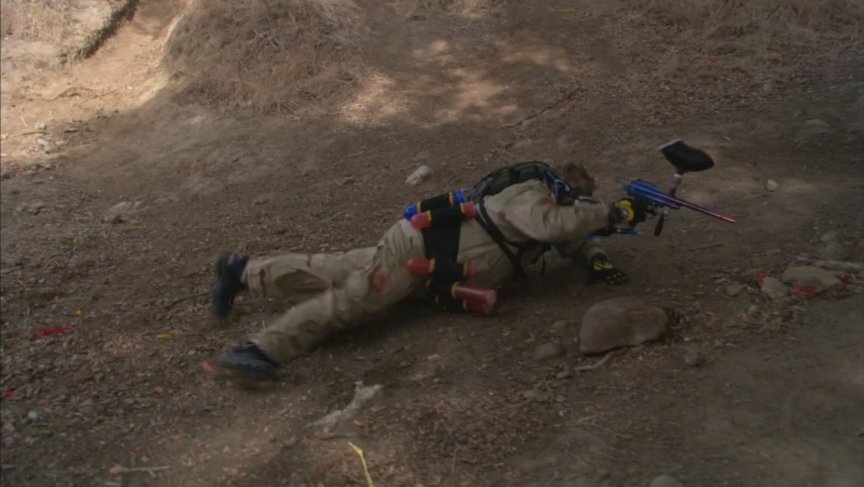 And, like so many other TV shows, Andy feels obligated to attempt a tuck and roll dive, losing several pods in the process. 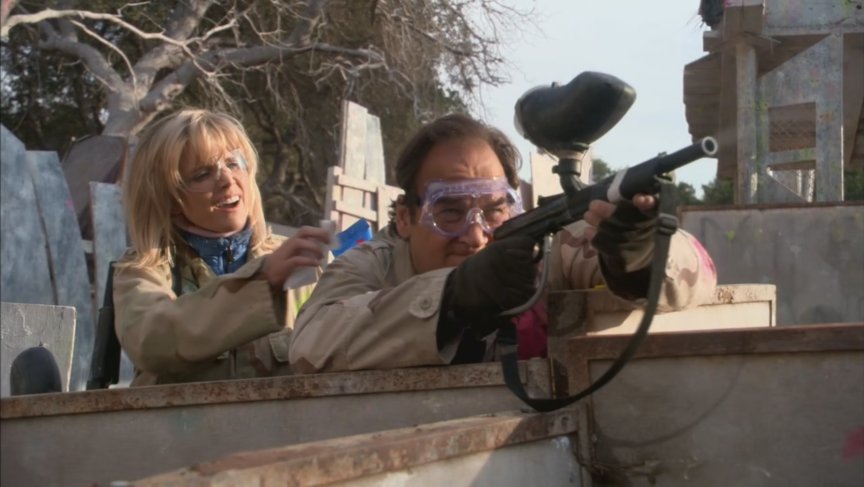 A few moments later, we see Jim, wearing completely inadequate shop goggles, attempting to return fire with his Pro-Carbine while
his wife Cheryl gets out a wet-nap and dabs off some splatter. 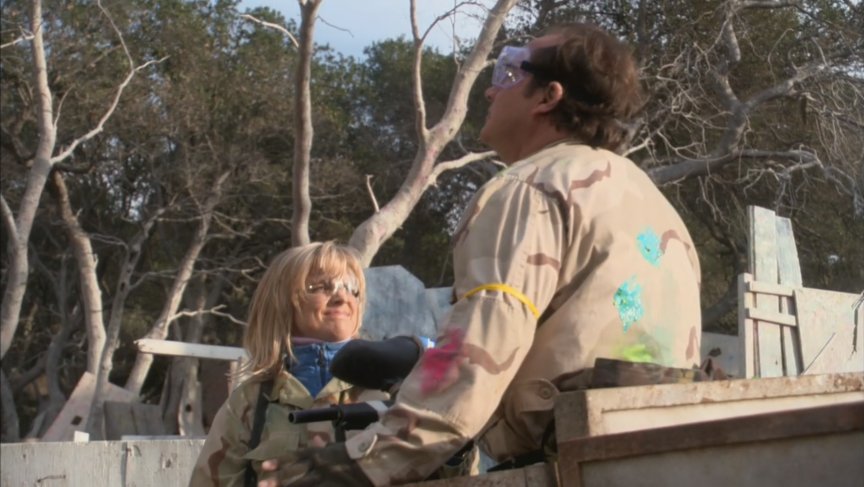 Annoyed at her interference, he turns to yell at her, and of course promptyly gets shot twice in the back. 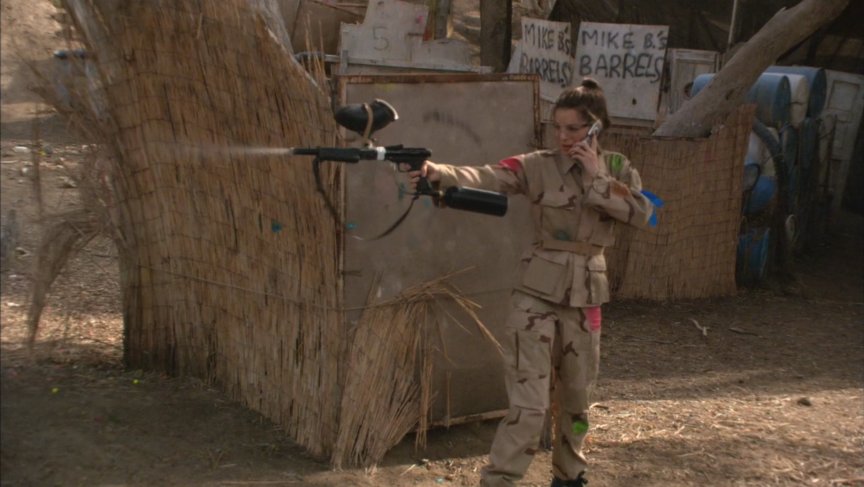 Meanwhile, Dana is wandering along chatting on a cell phone and decides to return a little fire of her own. 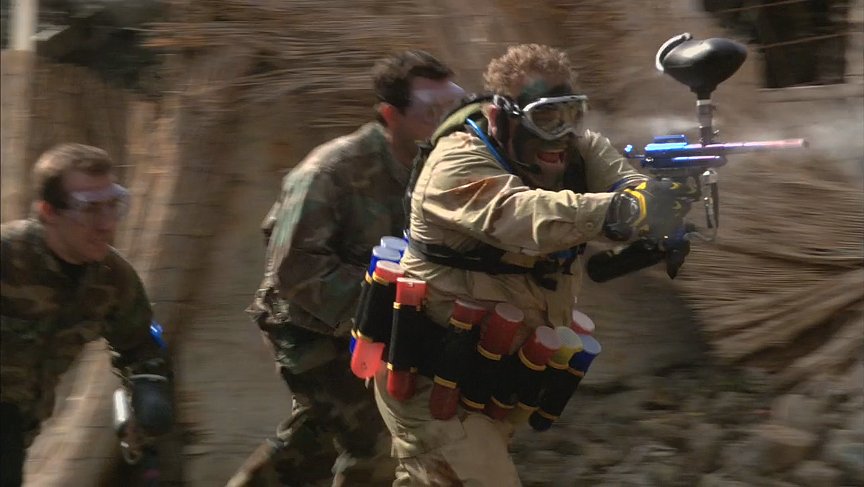 Andy and two more nameless walk-ons then rush in, firing wildly. Andy's marker was probably borrowed from one of the field regulars,
as it's been mildly modified by the addition of a stainless screw-in ASA, and a small inline regulator- probably a Torpedo.
Note the total lack of paint in the clear feed neck. 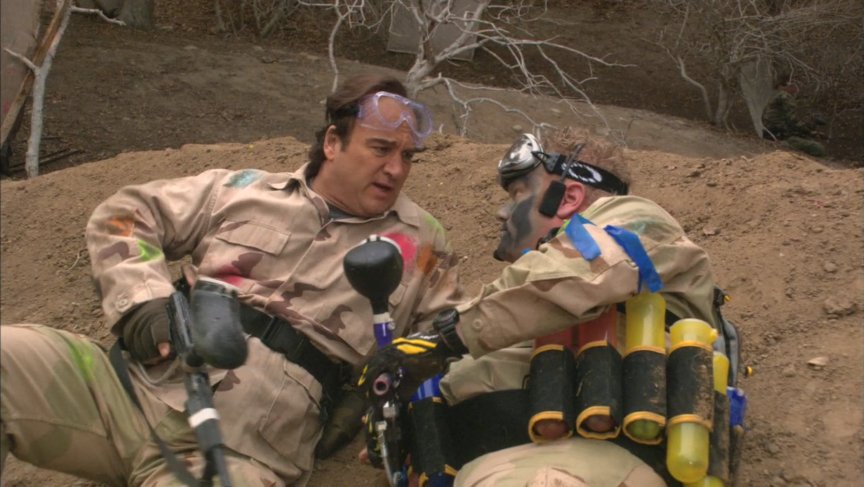 Jim and Andy then dive into a dirt bunker and collude to draw Cheryl into a nearby mud pit. And, as is all too common for TV shows,
they have to lift their goggles to the viewers can better see them emote, or something. 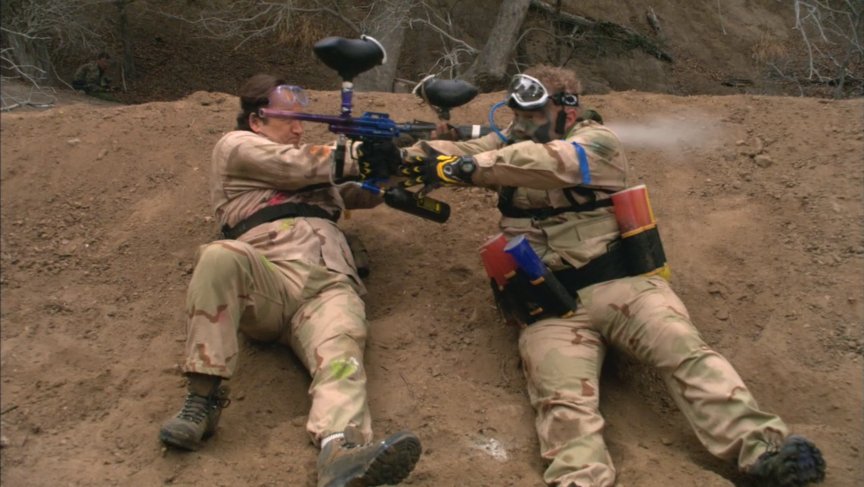 However, despite being in a bunker with their goggles off, they're still shown taking fire, and periodically shooting back. 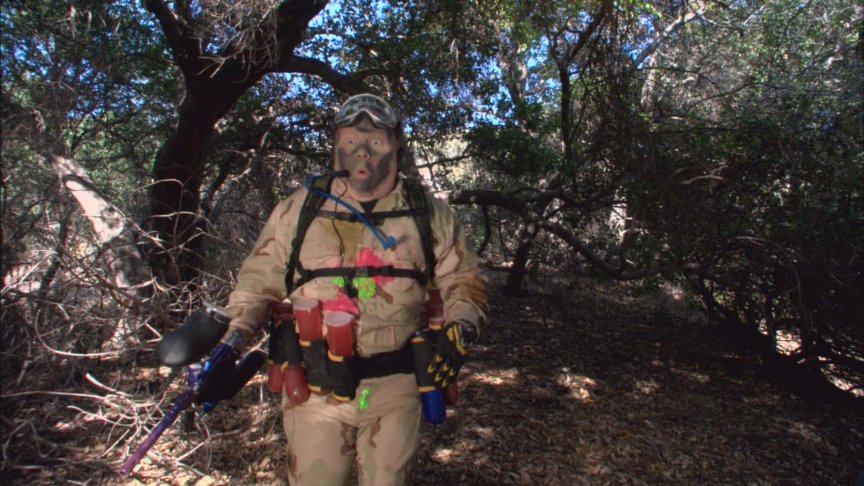 And finally, to round out the full list of TV-paintball tropes, naturally at some point one of the male players has to be shot
in the groin by one of the female players. It must be in their contracts or something. :)