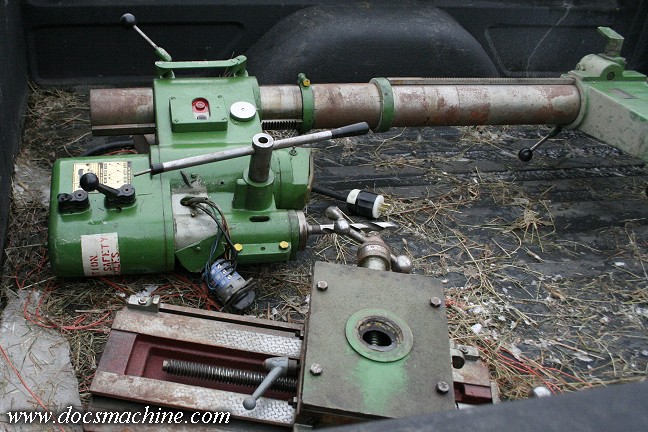 Back in 2011, I picked up another drill press- and not just any drill, this one was an
Arboga E-825-L industrial gear-head press. Morse Taper #3, eight speeds, 3-phase,
12" throat, lots of cast iron, and, as a sweet bonus, a nice precision-adjustable
mill-type X/Y table rather than the usual plain flat table.

However, as usual, there was a catch to this deal: Sometime in its recent past, it'd fallen or
been knocked over, causing some moderate damage. Still, the damage was repairable
and the price was too good to pass up, so I brought 'er home. 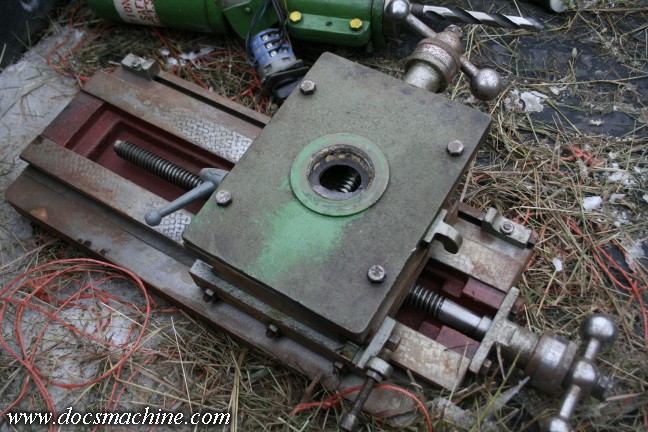 Thankfully there was little or no "hidden" damage, with the broken bits largely limited to the obvious and
visible stuff: One of the plastic gear selector levers had been snapped off, one of the plastic ends of the
downfeed handle had broken, the cast-iron power switch box had been shattered and the switch itself
somewhat damaged, the table mounting spud cracked off, and the table lift crank handle broken.

The table mounted like a normal drill-press table, with a central pin/shaft. Interestingly enough, the mount
was cast iron, and appeared to have been broken and repaired once before. Being relatively-fragile
cast iron likely saved other, more difficult to repair parts from being damaged when the thing fell over. 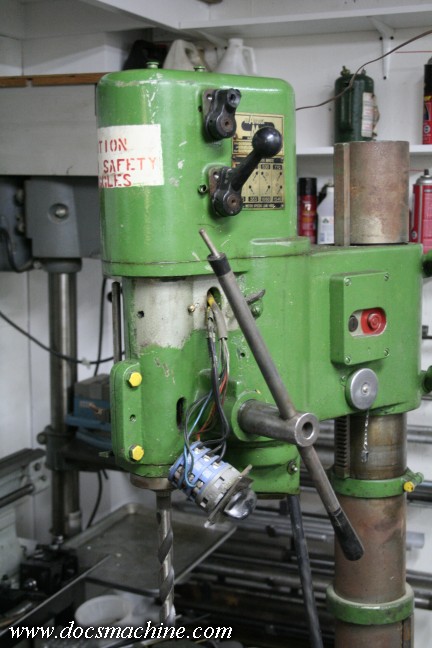 Once inside and stood back up, further surveys revealed no additional damage, and
running it through the gears (by manually turning the spindle) gave no indication of either
bad bearings or chipped gear teeth. The buttons on the side were main power to the drill,
with the switch on the front being both a start/stop and a speed range selector.

The drill has a two-speed motor, so the switch selects one or the other set of windings,
for high range or low range. The two motor speeds combined with the four gear
speeds gives a total of eight speeds, ranging from 125 to 1540 RPM. 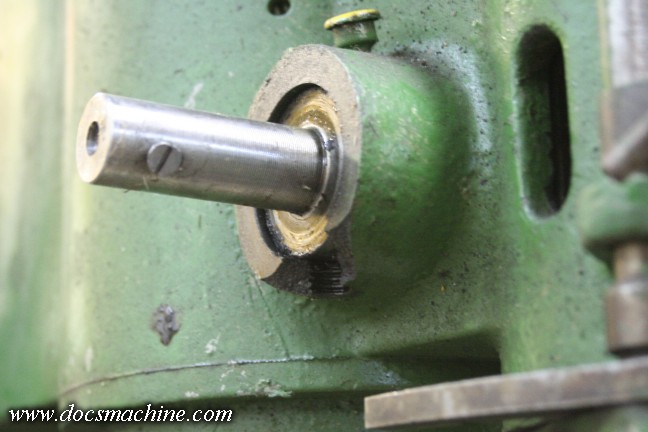 One of the more worrisome bits of damage was this missing fragment. There's a "watchspring" in a housing
that attaches here, to provide the return spring to the spindle. The threaded hole is where a setscrew went,
to hold the watchspring housing in and tensioned. Theoretically, I could just redrill another setscrew hole
at, say, 3:00, and it'd be fine. I eventually decided to weld it up, as we'll see later. 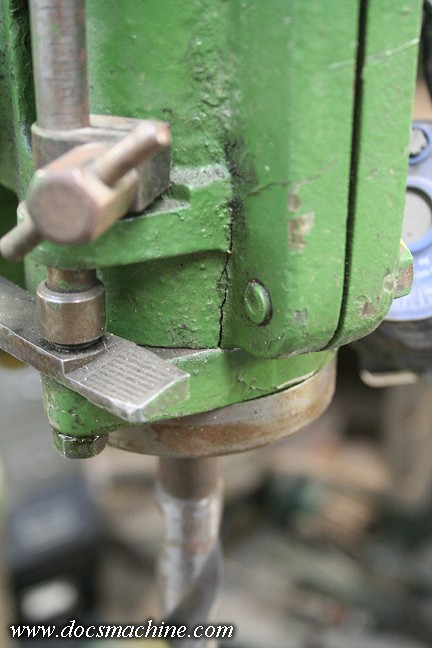 The decision to weld was partly decided thanks to this- a crack that I think predated the fallover,
at the front of the spindle housing. That pinch bolt basically just takes up a tiny bit of slop to
make the quill more stable, but clearly the lower bolt could no longer do the job. 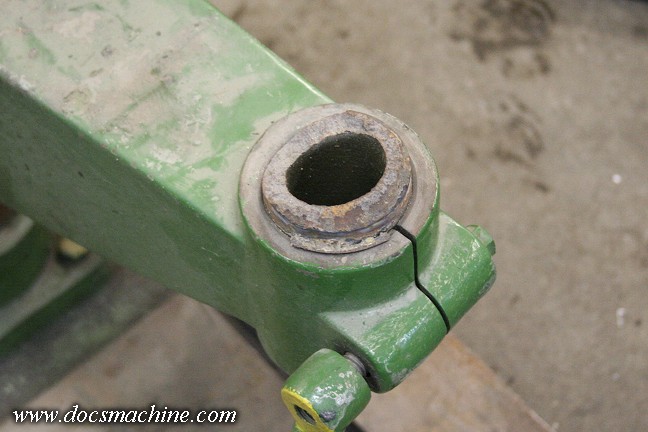 Ditto the table mount. I might have been able to weld it too, or braze it considering it'd already been brazed
once before (whether as a repair or to fabricate the mount in the first place I don't know) but this one
I decided to replace with rolled steel. It'll wind up breaking something else- and something
important- if I let it fall over again, but the idea is to not let that happen. 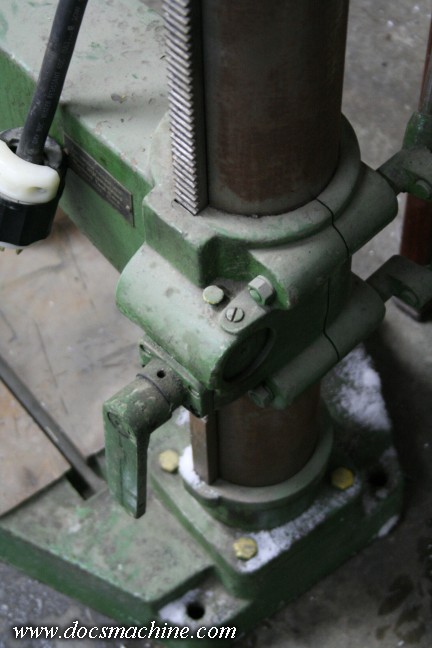 The table lift crank was also cast iron, and thankfully failed before it could damage the worm gear, rack or table arm itself. 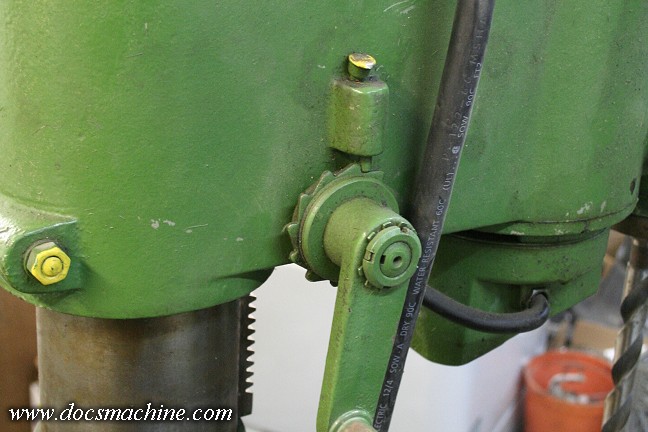 This drill has an interesting feature, in that the head can also be raised and lowered independently of the table.
It has its own rack and crank, and interestingly, has an odd method to the rack: A typical table lift uses a
worm drive, which is essentially self-locking. It can't go sailing down once the clamps are loosened. The head
doesn't use that, instead it has a sort of clutch. That star wheel ratchets against the spring-loaded pin on the
way up, but "slips" between two friction washers on the way down. Seems to work, so I'm not complaining. 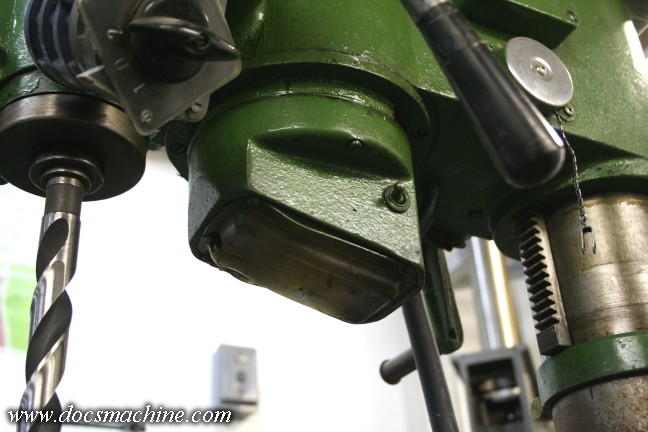 One other interesting feature is this built-in worklight, mounted over the endbell of the integral motor.
Unfortunately, while it might be handy, since I'll be running the drill off a VFD, I'd have to separate connection
for the light, and if I do that, I'd probably prefer a larger, brighter halogen style worklight on an arm. 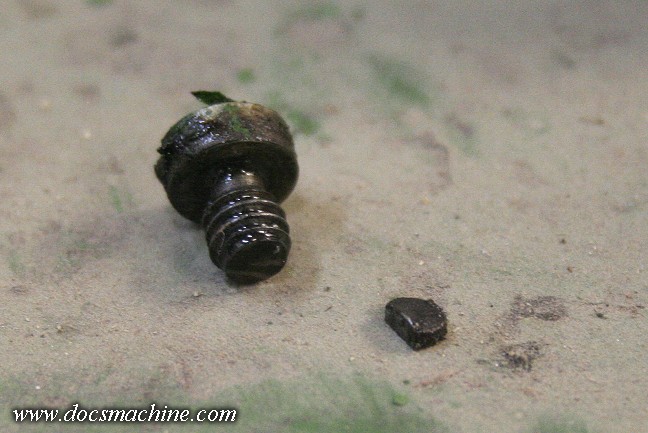 And finally, one of the last bits of damage I found while doing one of the first bits of disassembly.
That's a locking screw that holds the downfeed handle shaft into the drill body. The end runs in a groove
in the shaft, letting it spin, but not move out of the body to the left or right. The impact slammed the shaft
to the side, and sliced the tip off the screw as neat as if you'd used a proper shear.
So, all told, there's some work ahead, but not bad for the price.