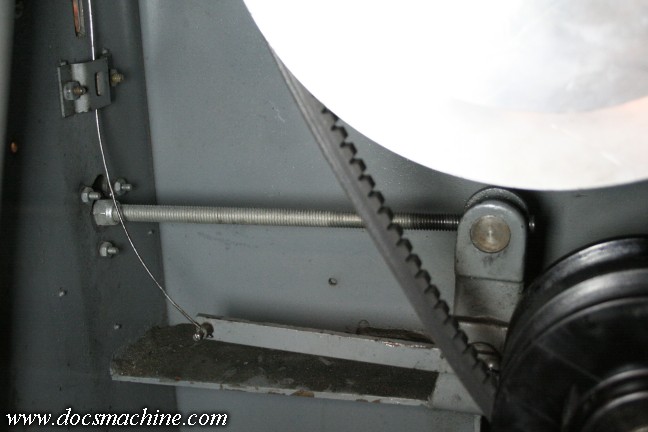 One bit that still annoyed me was the speed control. While it worked, I didn't think it worked well.
I initially suspected it was a refit- that somebody pieced it back together at some point. I'm not so sure
of that now, but I'm also still by no means convinced that it was factory, either. 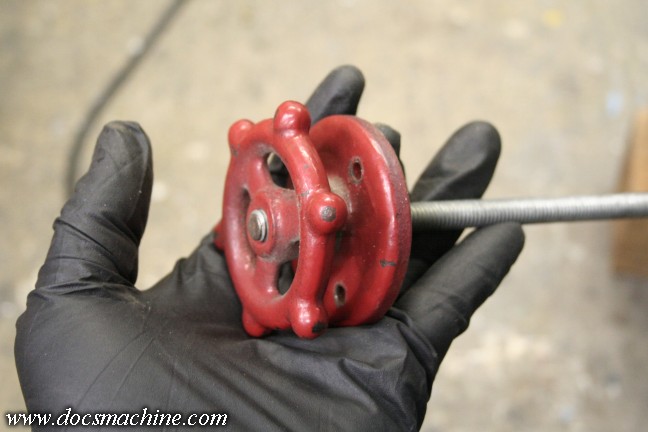 The handle on the outside of the machine turns that threaded rod, which screws itself into or out of the round
"nut" at the right-hand end of the threads. That raises or lowers the black pulleys, which changes the belt spacing,
which in turn changes the speed ratio. It also looks nothing like the same linkage in the DoAll PDF. Besides the
shaft in the parts manual shown as only partially threaded, this one is a chunk of allthread. In the manual the
knob is a smooth handwheel with a crank handle, while mine is this cast valve-like handwheel. 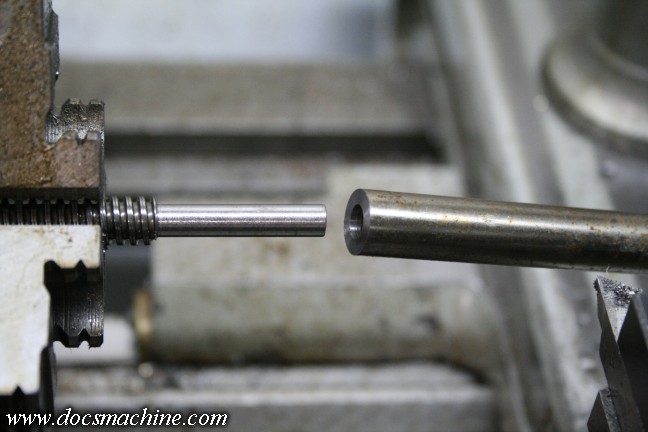 Now, that's not necessarily "wrong", since that's the same handwheel used as part of the upper wheel tracking
adjustment, and that IS the same as the one shown in the manual. The manual (and other photos) also show
stop nuts on the threaded rod, so that one doesn't crank the assembly too far either direction. So I'm not at all
sure what to think in regards to the linkages' originality, but regardless, I wasn't overly happy with it, and decided
to upgrade. The old rod is standard 3/8"-16, but in looking around, I was able to find a section of 3/8"-10 ACME
rod (from McMaster) and an inexpensive 3/8"-10 ACME tap (off of eBay.) I figured the threads would be stronger-
not that there's much force on them, I was thinking in terms of longevity. And they'd be faster- what's the difference,
about 40% quicker rate? Once the rod came in, I sleeved it to a section of 1/2" solid rod. 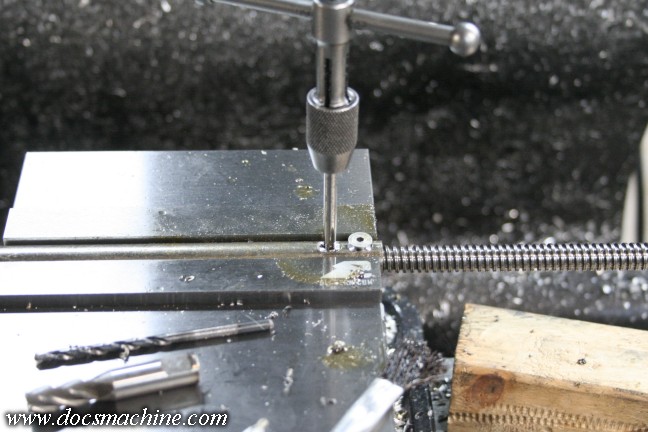 And pinned it by simply drilling through for a pair of 8/32 screws. 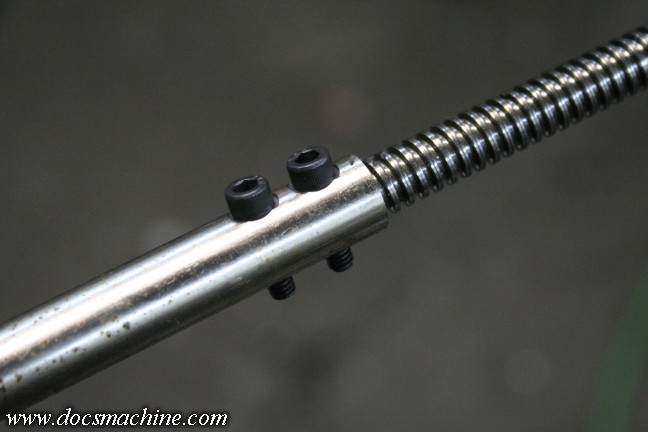 It seemed the easiest way, and should be plenty strong. 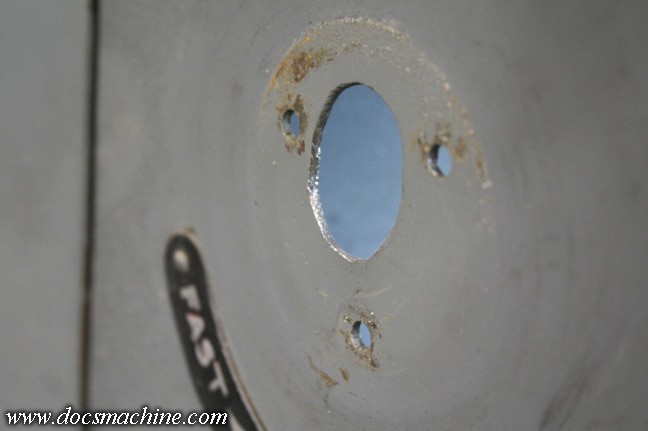 Why 1/2"? Well, the original rod simply passed through a cast iron flange- which, when removed added one other
clue that makes me think this thing's been "repaired". The hole through the chassis is offcenter, badly ovalled,
and roughly hand-filed. That really doesn't look like a factory hole to me. 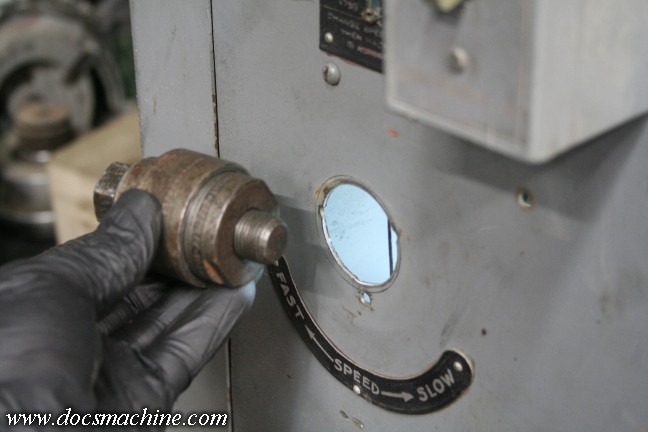 I decided to improve it. After checking alignment with the new threaded rod,
I punched a new hole using a Greenlee knockout. 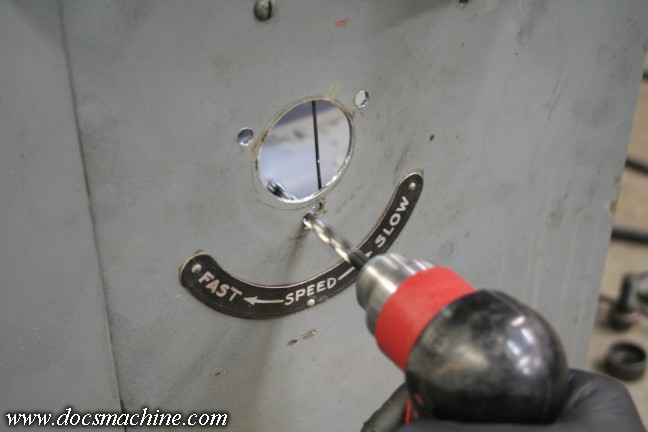 And drilled some new mounting holes... 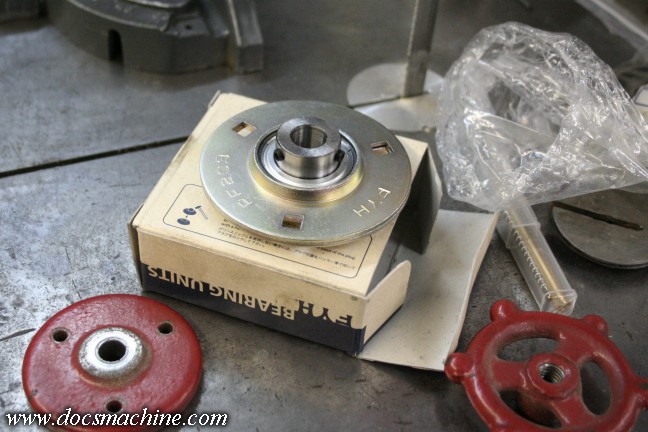 And installed this new semispherical flange bearing with a 1/2" bore. 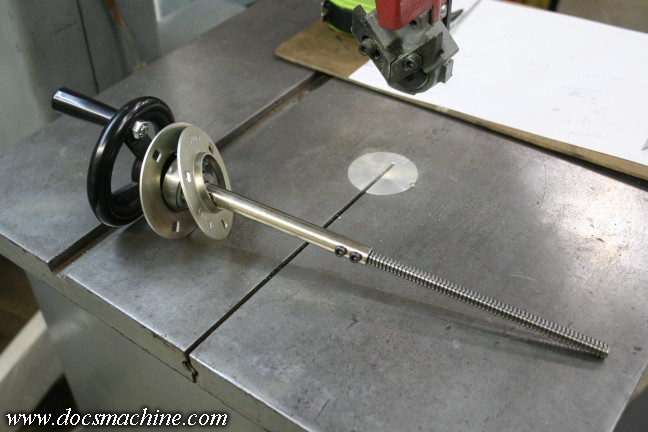 Test assembled with a cheap eBay plastic crank handle, the new setup looks like this. 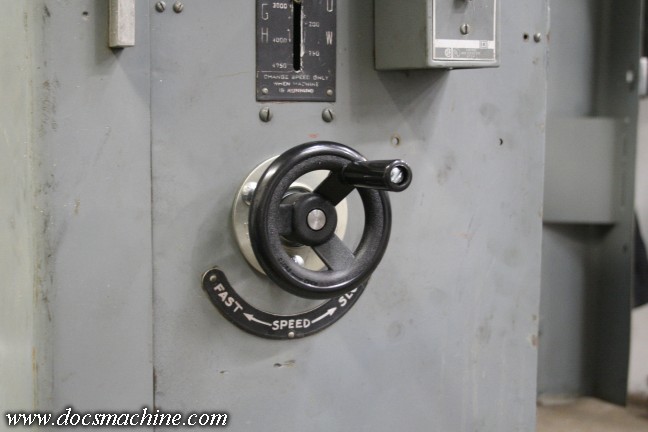 And installed with a set of carriage bolts. 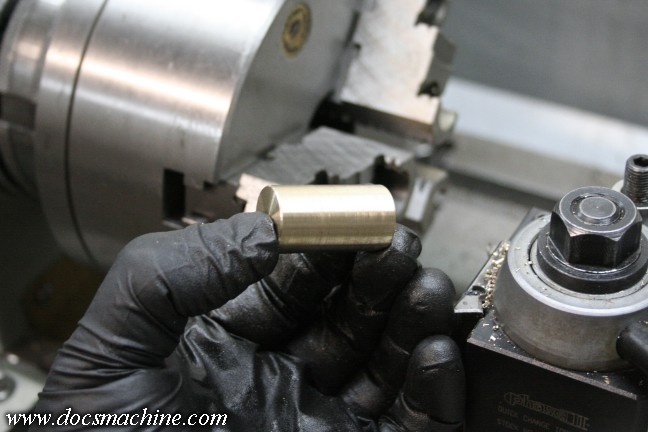 To match the new screw, I turned a new nut from brass... 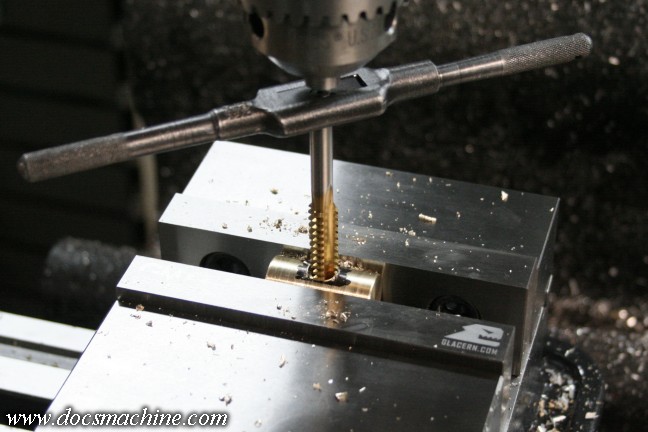 And simply tapped it. 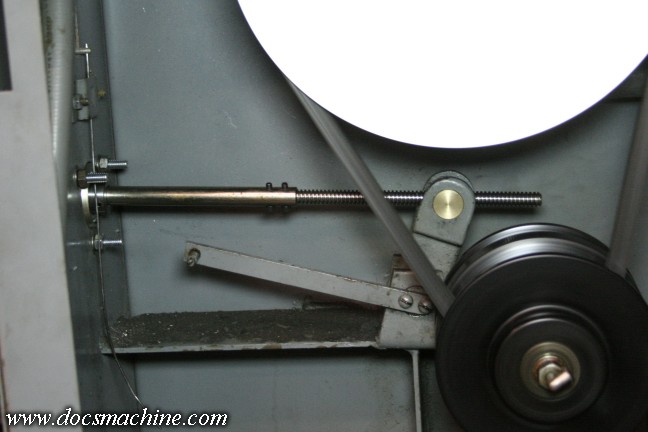 From the inside, the assembly now looks like this: I left the screw longer than is probably necessary,
both so that I can make and install some stop-nuts, and also just in case I have to tweak things a bit or
play with the spacing. Note the sheetmetal arm attached to the pivot- it's out of place in this photo, but that
wire on the left attaches to the swivel at the end of it. As the speed assembly rocks, that arm pivots, and
simply pushes that wire up and down through the guide. It was badly buggered when I got the saw,
and I'm not entirely sure that's how it's supposed to go, but I have no factory photos to go by.
If it IS factory, it's actually quite crude. 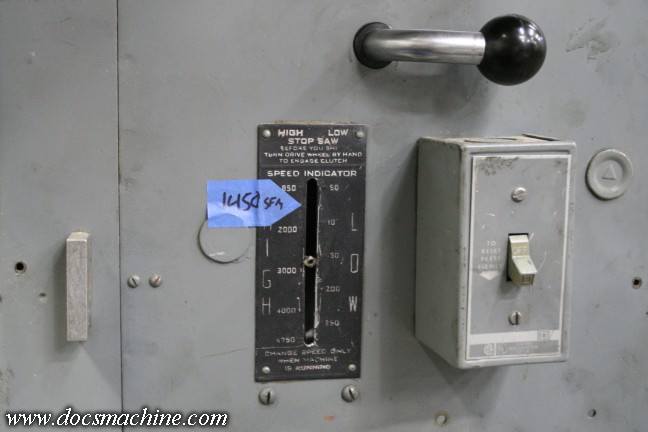 The actual indicator is simply a small spool that clamps to the wire by a tiny setscrew, and goes
up and down in this slot. Again, it's functional, but only just. The speed control itself, however,
now feels solid, works smoothly and easily, and is noticeably quicker. It works so well that
I now believe one or both of my belts are the wrong size. :)