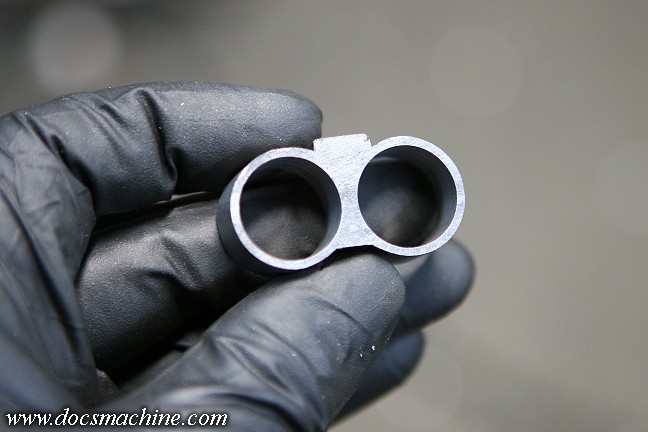 I was contacted by this fellow who is converting an old 12-gauge double-barrel into a double rifle. It's been done before,
and there's lots of ways to do it- the "right" way, as I understand it, being that you cut the shotgun barrels off ahead of the
chambers, turn some new rifle barrels to fit, press and solder them in, and then refit the filler strips between the barrels
(IE, the "rib" down the top on a shotgun.)

This guy was trying something else- again, not entirely new, but hey, it was new to me. He was making some inserts-
subcaliber barrels that slid into the shotgun bores. He wanted it "convertible"- put the sleeves in and use it as a rifle,
or take the sleeves out and use it as a shotgun. It's not a "switch on the fly" type of thing, since, among other things,
he has to change the extractor as well (the rifle cartridges having a much smaller rim, of course.)

The tricky part he was stuck on was the muzzles. They couldn't just be soldered into place, he couldn't just drill and
tap the shotgun muzzles for setscrews, and he didn't want some big blocky thing clamping everything together.

And, the tricky part of the tricky part: There had to be some measure of adjustability. When a maker builds a "real" double rifle,
there's a measure of 'cut and try' in setting up the barrels, so that when they're assembled and soldered together and all that, the two
will shoot to about the same point of impact at a given distance. There's usually some kind of conglomeration that holds the barrels
together, but allows some adjustability- the gun is then fired at a target and adjusted so that both bores hit to the same spot.

Once they're "regulated" to each other, the 'smith takes some careful measurements, fits solid pieces that go between the barrels,
and soldered everything together in the same relative position was when it was being test-fired.

This fellow didn't have that luxury- he had to somehow both hold the barrels in place (both to each other and to the shotgun bores)
and allow for a measure of adjustment. Without modifying the stock barrels, or adding a big clunky block. That's where I came in.
I went and had a look at the barrels, noodled a bit, and took some careful measurements. After some more pondering, I whipped up this.

"Whipped" not really adequately conveying just how many hours I had into it, but hey. I basically duplicated the muzzle profile
in a single piece of steel (like most double barrel shotguns, the barrels are two separate tubes, joined by soldered strips in between
and a rib on top) that would eventually be drilled through the center for a pinch screw, and slit.