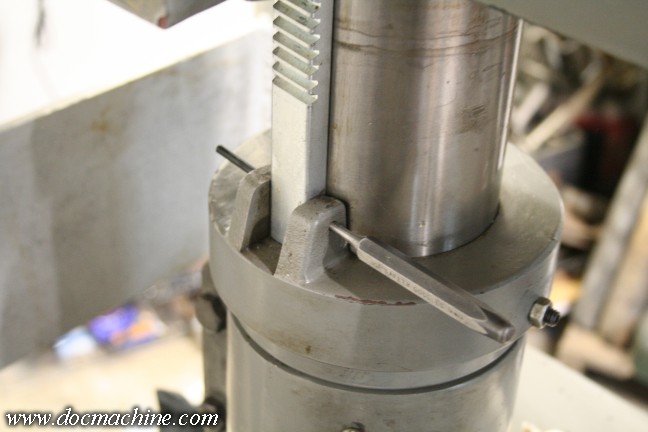 One of the issues I'd wanted to fix even back when I was using the mill regularly, was the elevation rack.
The top of the rack didn't have any kind of stop to it, so you could crank the head up to the point it'd run
off the teeth- at which point it's fall back a tooth with a nasty clunk. I'd also planned on trying to raise or
extend the rack, since the column of the mill was at least six inches longer than you could raise the head.
And every now and then, with a long drill or a reamer or something, you could run out of space.

However, while rebuilding the belt drive, I saw why it was as relatively short as it was- the main variable speed belt
passes around the column, and at all but the middle of the speed range, the belt comes very close to the column.
If I extended the rack, at the lower settings the belt would be grinding itself away on the rack teeth.
So I decided to skip the extension. If I ever need that much daylight, I've got the big mill for that.
However, I still wanted the stop, as I hated that runoff clunk, so first I had to remove it-
basically just a roll pin at the base mounting ring. 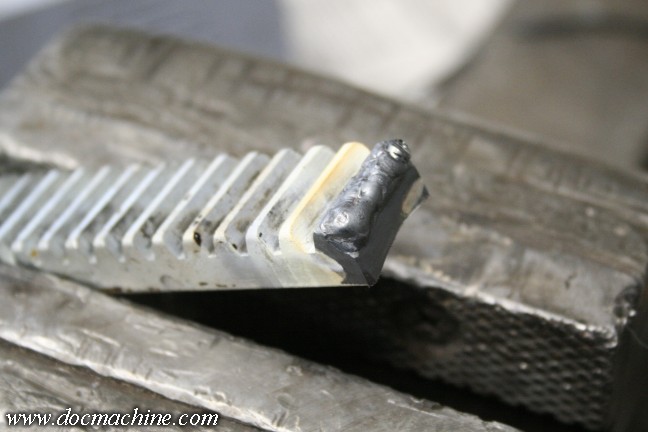 Then I filled the top partial gear notch with TIG weld... 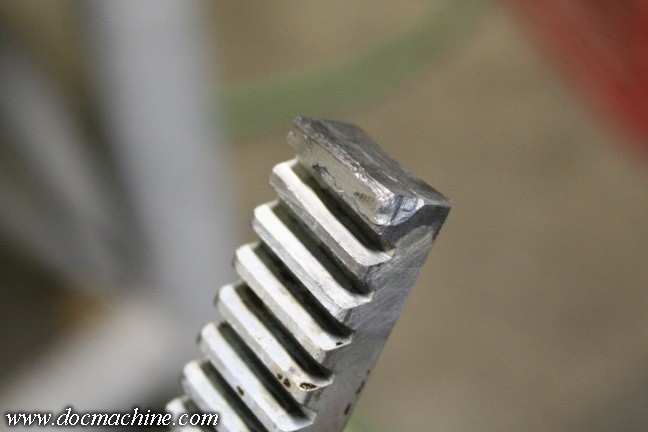 And ground it relatively smooth.That made a wide tooth the elevating gear can't pass over, making a firm stop at the top of the rack. 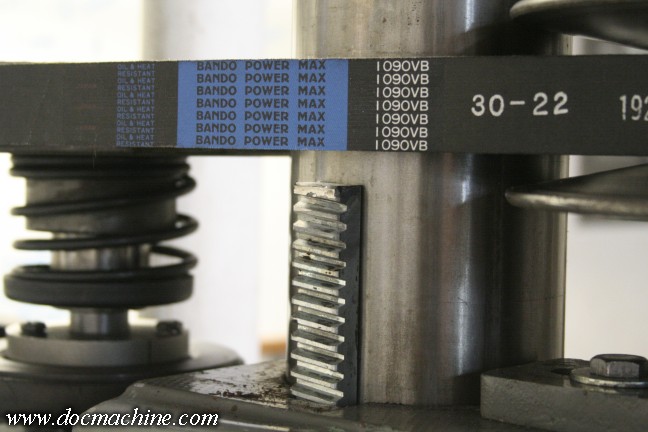 And installed. You can see there, if the rack extended up much further, it'd start contacting the belt,
and too much of that would very likely badly damage it. 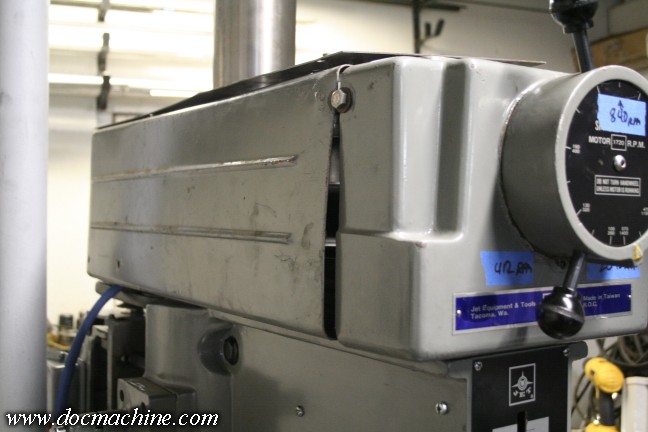 Anyway, with that out of the way, it was time to put the sheetmetal cover over the belts. This is another
thing that has always annoyed me, since it fits badly, lines up poorly, and always rattled. 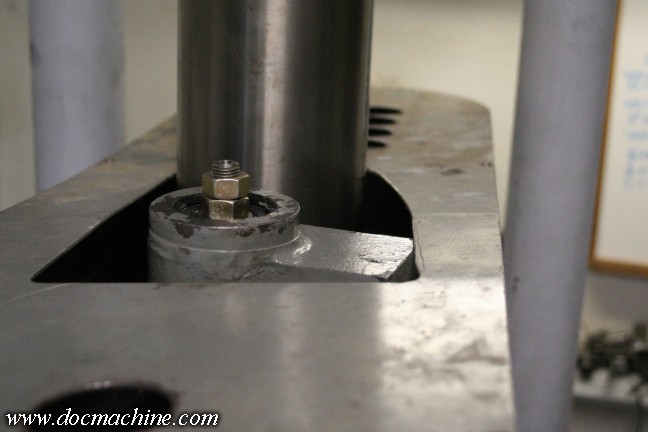 And now, as I had to move the speed adjuster to compensate for slightly different belt lengths,
even the original cutout no longer fits. 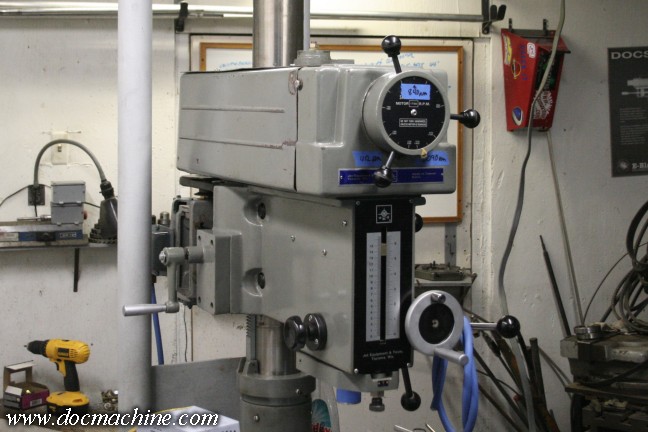 After several hours of tweaking, hammering and bending, I got it... well, at least marginally less bad. :)
I'm still not happy with it, but at the moment, I'm also not all that enthusiastic about doing major
reconstructive surgery on it either. For the moment, it's acceptable. 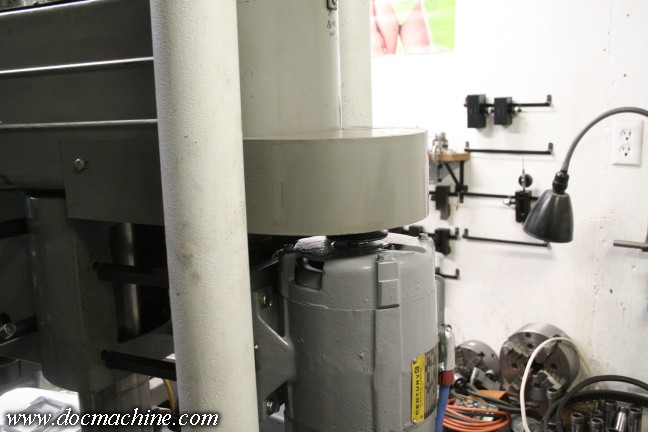 The final bit was the add-on belt cover over the jackshaft assembly, which does, actually, fit quite well. 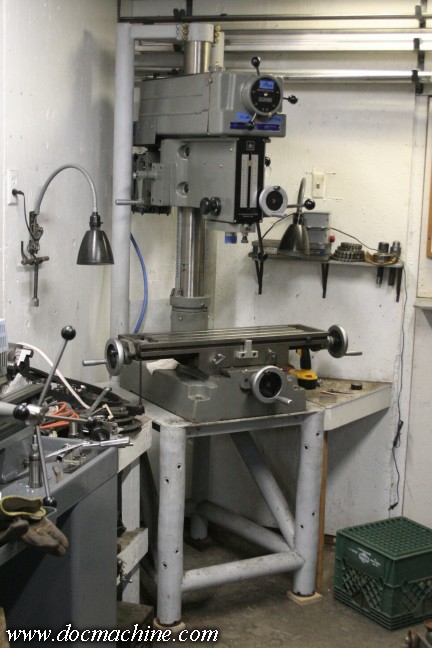 Then, with all that done, I just slid it back into place- "slid" meaning I used a pallet jack, of course. :)
The combined mill and stand probably weighs close to a thousand pounds. 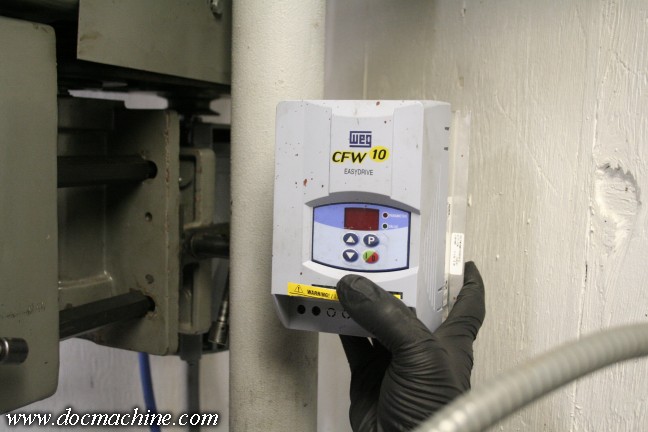 Now, there were still two things I needed before I could cut a chip- the first one was I needed power.
I'd considered just bolting the VFD to the nearby wall, but I decided I'd rather have an onboard mount,
accessible but out of the way of the chips and oil spray. Like, right about here. 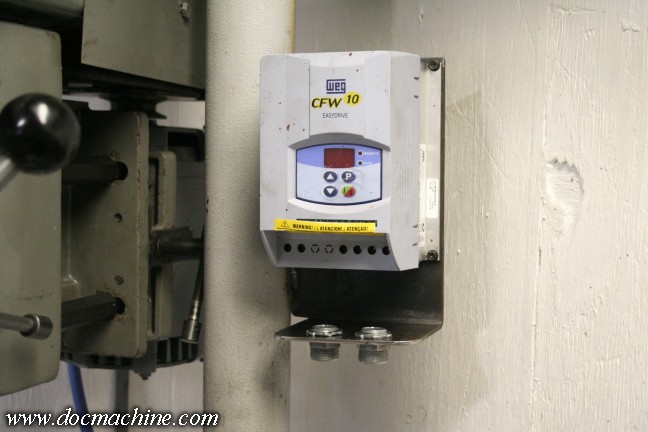 A qucik cardboard template, a few seconds with the plaz, some grinding and a pinch with the press brake,
and I had a 10ga steel mount. Once welded into place, the VFD mounts like so, including a pair of
strain reliefs for the cables. 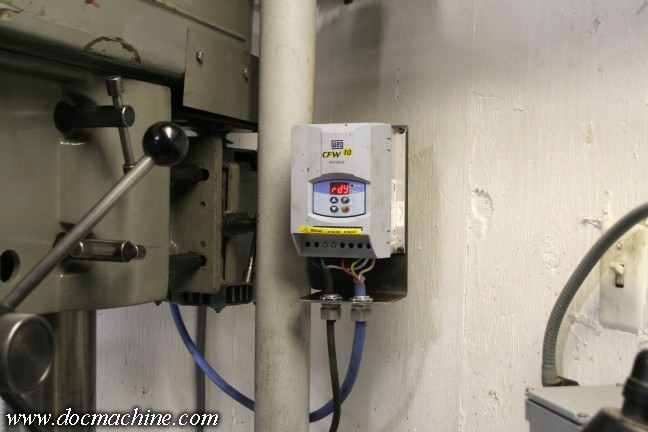 After that, it was a simple matter of wiring and a quick test. I'll still have to run the remote signal wire
to the original start/stop switch, but for the moment I can at least test with this setup.
I'll also probably make an add-on cover to better guard the wires.