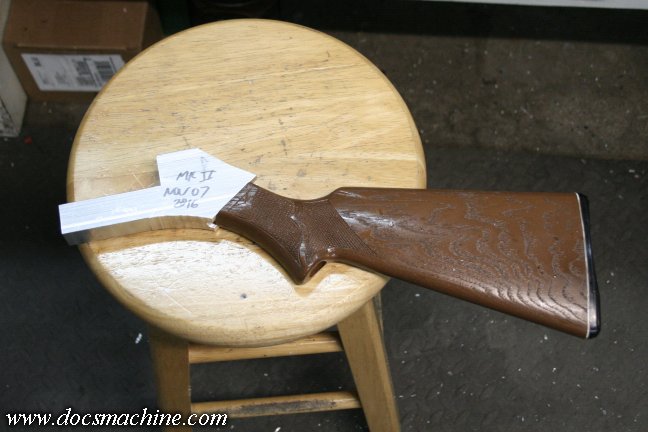 As I was still very early in the developmental stages, and would likely have to build at least 2 to 3 more prototypes
in order to truly refine the design, I wasn't looking forward to the idea of having to make a series of wooden stocks
for each version. Fortunately, a year or two earlier I'd had the bright idea of adapting old pellet-gun stocks to
paintball guns, and had an extra Crosman unit laying around. A few minutes with some of the revised numbers
and a bit of time on the mill, and I had a rough-start lower receiver blank for the Mark II. 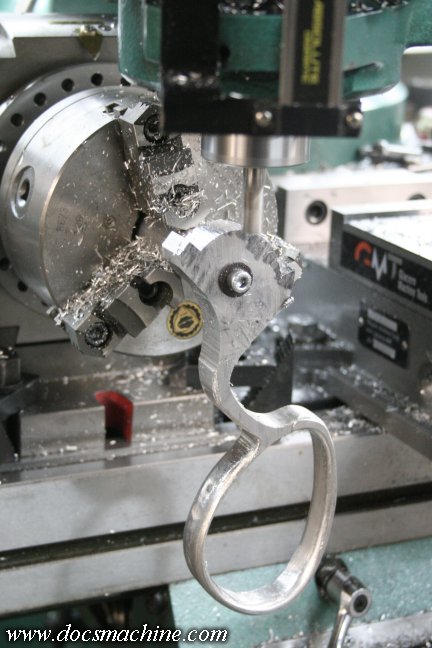 Combining the data from the 'proof of concept' prototype, and sketching around the
new receiver and stock layout, I was able to rough out a lever blank, and start machining
the gear drive. The loop was rounded off basically just to knock off the sharp edges,
but I didn't waste too much time making it pretty since this is still an early prototype. 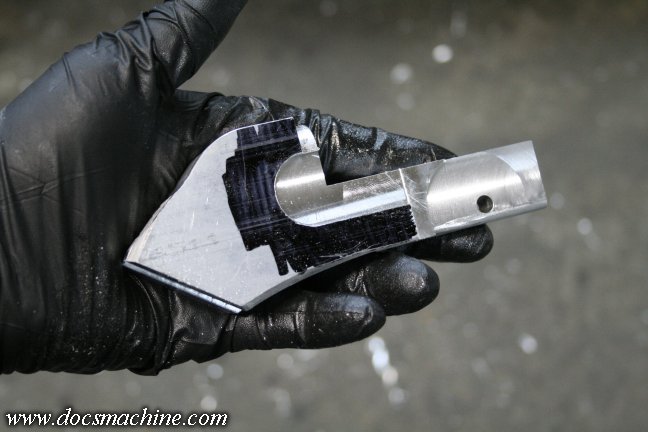 Again using the new data, and fresh specs from the newly-created lever, I was able to do considerable work
to the lower receiver blank. 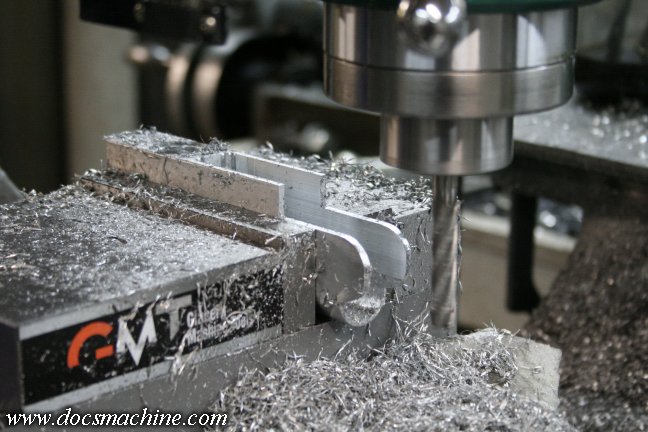 To match up with that, I painstakingly machined a new upper reciever, taking more time and care in order to
get the two halves to match up snugly and accurately. It may not look like it, but there's probably six to eight
hours machining time in that part up there. 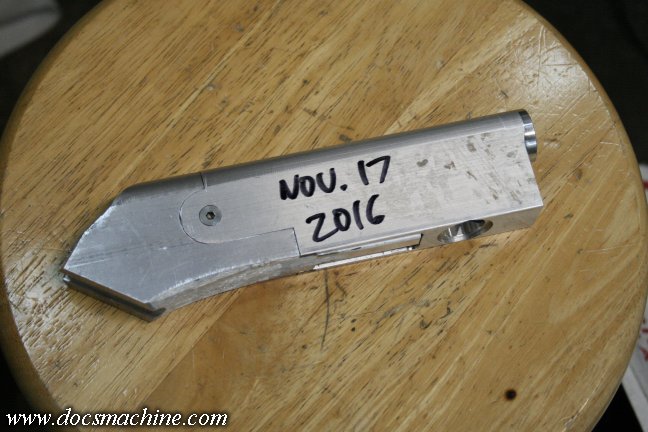 But it was worth it. The two halves fit together almost perfectly, and the new design keeps everything covered
with just the one visible fastener on each side. 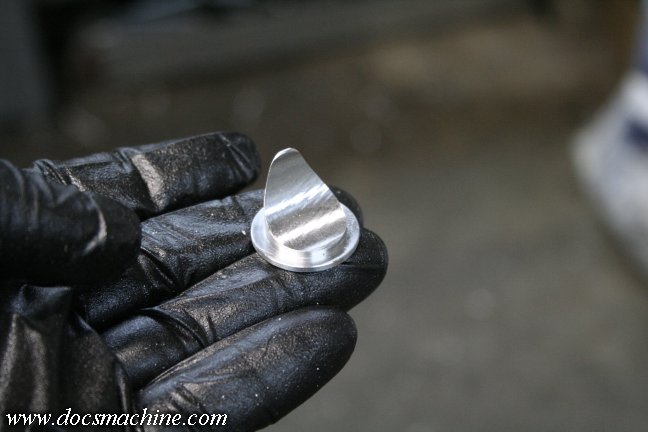 As this is intended to be a functional prototype, a feed-ramp plug was fabricated and fitted. 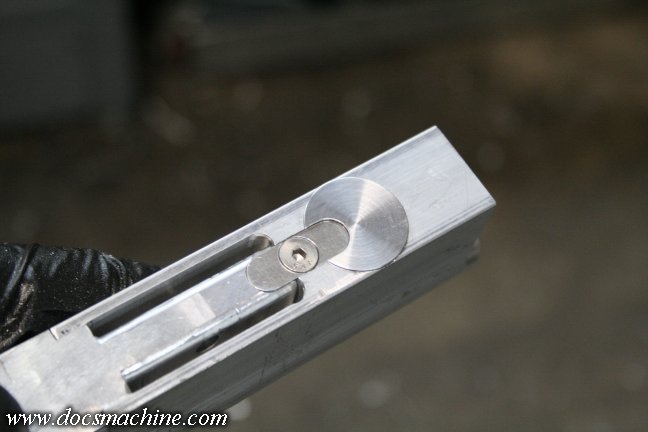 And, to retain it, I made this little recessed tie-bar, which both retains the feed ramp plug,
and helps stabilize where the two receiver halves come together. In the next version this tab
will be made integral to the lower reciever. 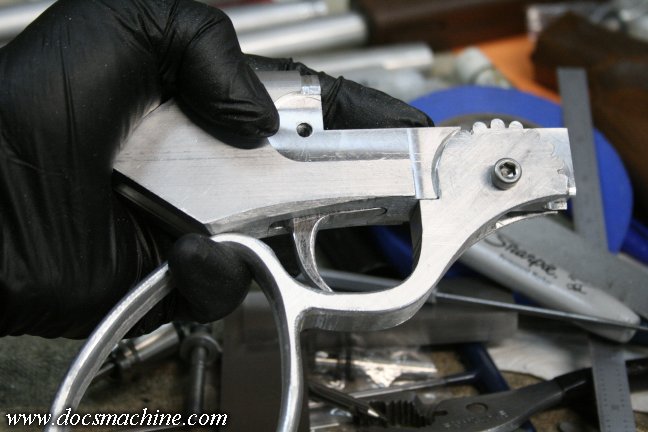 Now we're getting past where we were with the Mark I prototype, and I had to figure out how to slip a trigger
into the assembly. While this one works, it took far too much "cobbling", and I'm not terribly happy with it.
A little more thought will be necessary for the Mark III version. 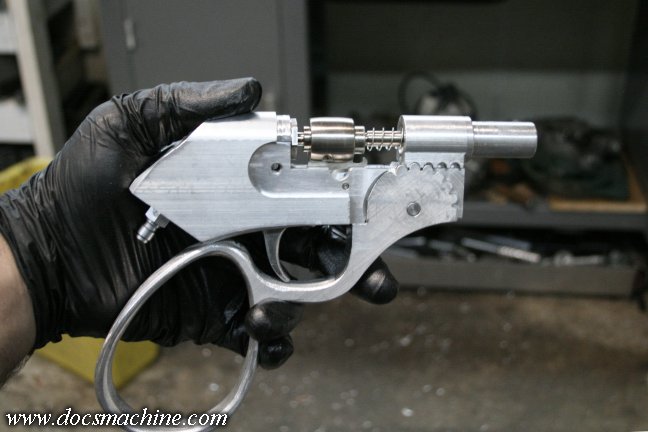 And now we're getting somewhere. I have, of course, skipped a lot of steps, as this article isn't necessarily
intended to be a blow-by-blow how-it's-done. It's mainly documenting the steps necessary to go from an
idea on paper, to a functional prototype, and if we're lucky, into limited production.

Here, the reciever is shown almost complete. As noted earlier, we're using some Phantom components,
since there's no need to reinvent the wheel, as they say. The bolt is complete and fitted with a Phantom "TPC",
the trigger is in place and has a small pin to retain it (small spot just below the hammer sear) the body has been
tapped for an air fitting (in place of the stock's retention screw) and I'm using a lightweight spring for testing. 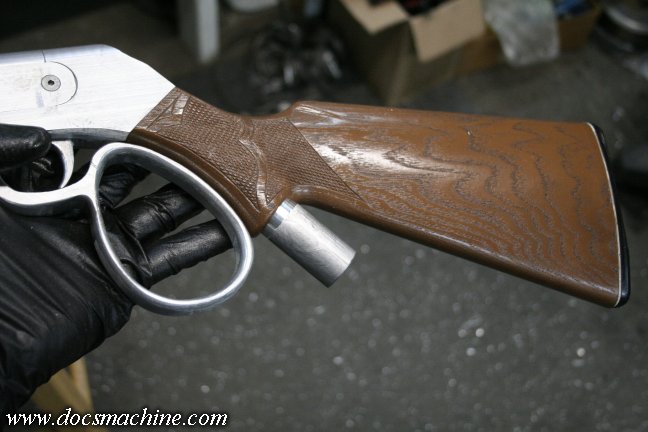 As the air passage took the place of the retention screw, I added a short pipe nipple to the receiver,
and fabbed up this aluminum insert which screws to the nipple and acts like a nut and washer. The
insert is drilled through and accepts a QD nipple, so the gun can be tested with a remote hose. 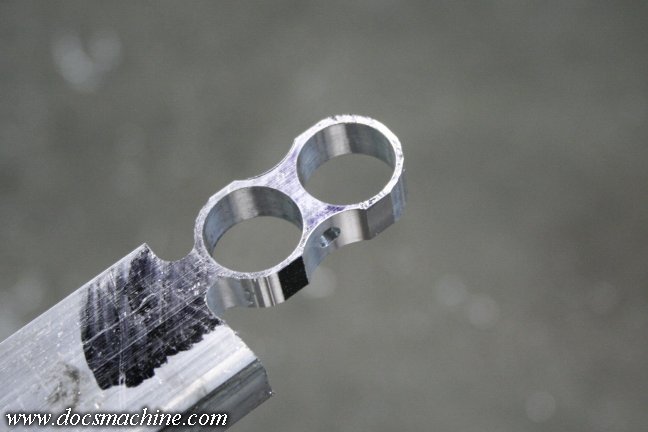 And, the finishing touch- at least, for the moment- I whipped up a proper barrel band, since the lower
feed tube is just a slip-fit for now. This band will help lock it in place for testing. 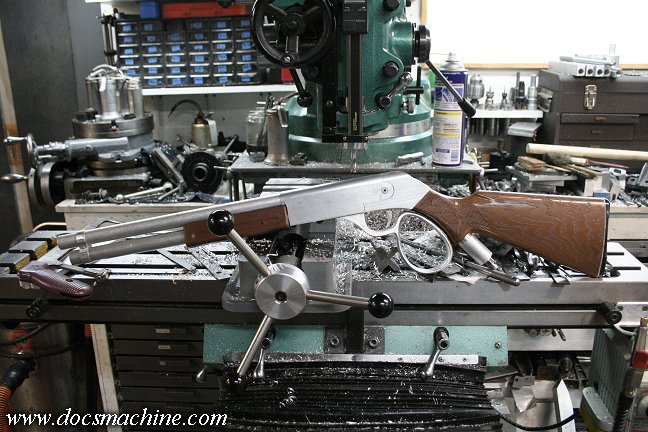 November 20th, 2016: There it is, a fully-functioning prototype (minus the feed machinism, at the moment)
built almost entirely from scratch, going from cocktail-napkin drawings to a working second-generation
model in just 20 days.

But, we're just getting started...