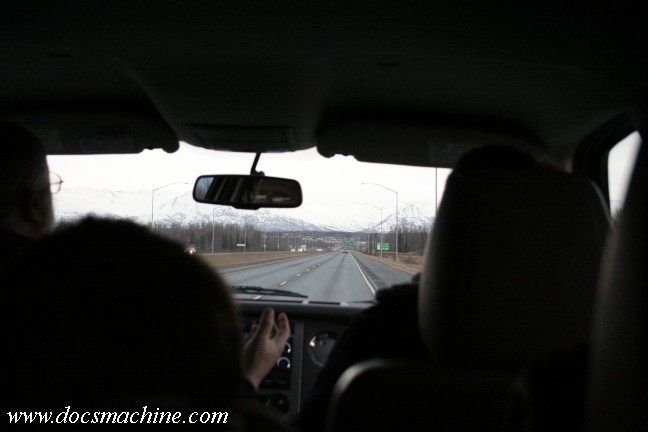 In January, we all bundled into a rented Ford Extrusion and headed North. We passed through rain, snow, light ice fog,
more rain- in January- icy roads and finally hit clear dry roads just outside of Wasilla. 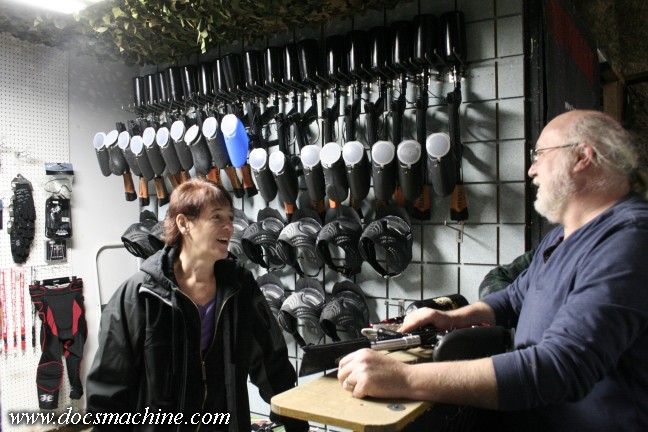 The Splatterhouse turns out to be one of a row of large rental buildings, like large quonset huts. Inside, the place is well laid out
with a nice office/pro-shop, a nice selection of rentals; Smart Parts Vibes and the newish "rental" version of the Model 98,
all on 47ci steel HPA tanks. They had a monster compressor out back, and all-day air with your entry fee. 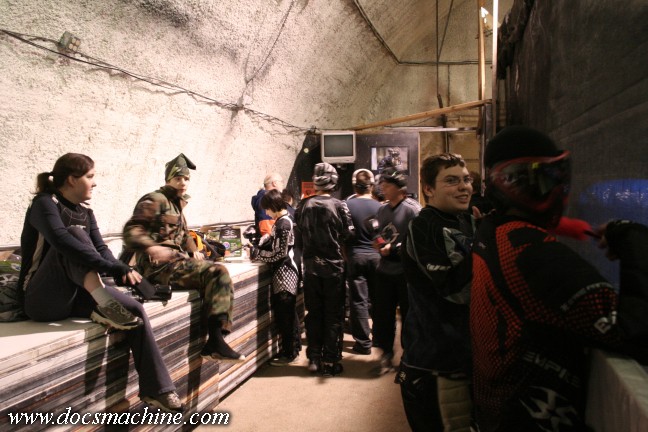 The field itself, though, was pretty small. Scratch that, it was tiny. It was pretty much as big as they could make it in the
space they had, and I knew it was going to be pretty small, but I was still somewhat surprised.

On playing it, though, it was not bad at all. Games were quick, as you might imagine, but that worked well- several groups
showed up over the course of the day, so they'd basically just take the nearest six or eight ready-to-go players, run two
or three back-to-back 3 or 4-man games, cycle them out to clean up and reload, and run the next group in. 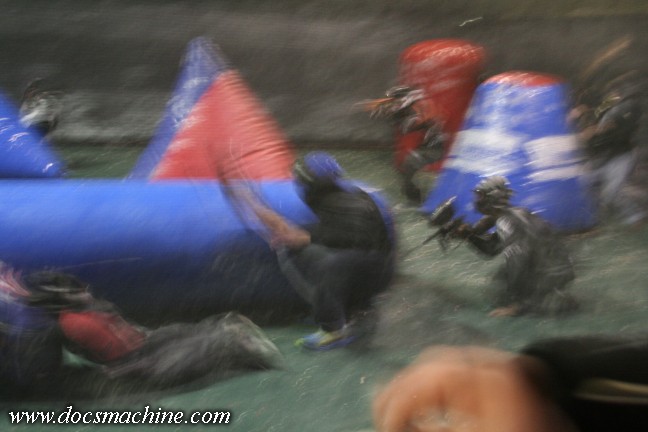 The pictures aren't that great, since while it was pretty well-lit, it was "dark" as far as the cameras were concerned,
especially having to shoot through the black-mesh netting. The best my old XT could do was about 1/5th second
exposures, so most of mine came out pretty blurry- though I thought this one from one of the games that had
eight (!) players on a side, came out kinda cool. Drew's newer camera did much better, though not perfect,
and for the best pics you had to kind of had to wait for a "still" moment to minimize blurring. 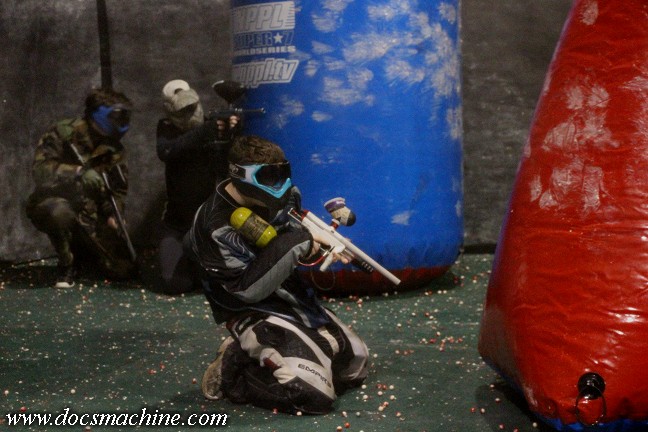 That's a Chipley S6, by the way, and the guy in camo in the background has a Tippmann SL-68 II. I knew I shoulda brought my Sniper. :) 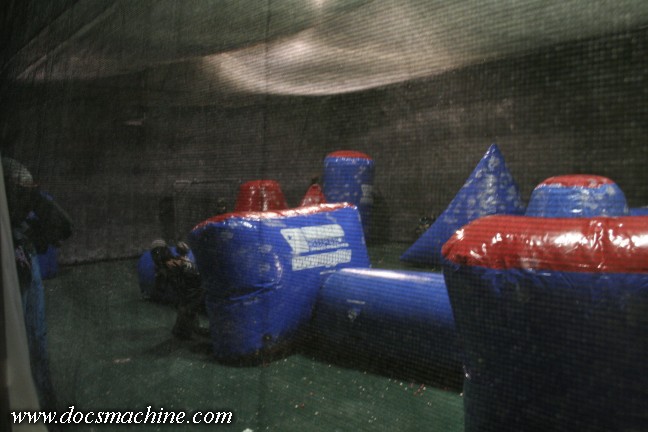 I was fairly impressed at how clean the place was kept. Supposedly after every weekend, they pressure-wash off the bunkers,
leaf-blow all the paint together and scoop it up, and then run something like a large industrial carpet cleaner over the AstroTurf. 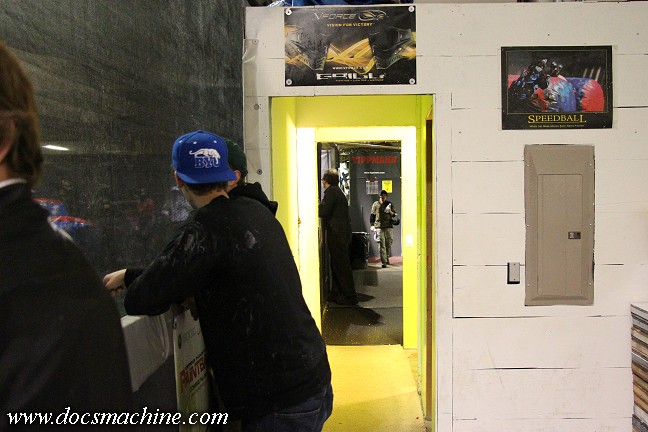 There was a "hallway" of sorts, along one side, where players could get their gear ready, or watch the games- I can't fault their choice of decoration, either. 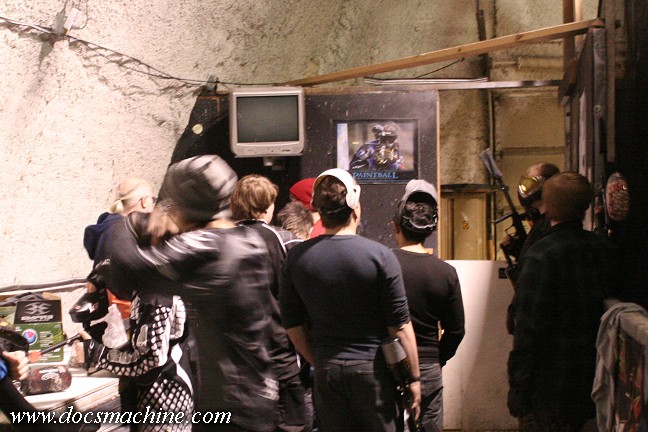 Every Halloween, they reconfigure the building into a Haunted House, so the "tables" along the sides
are stacks of the movable panels they use to make up the mazes. 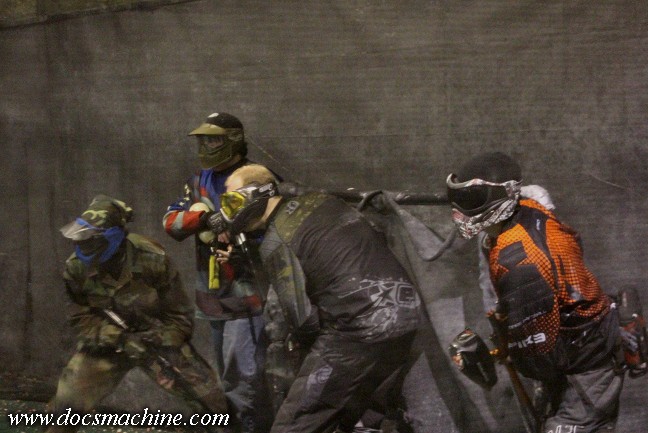 To get ready for this trip, I'd installed an older, new-to-me Centerflag Dynaflow 4500 on my Etek.
I'd just gotten the tank in and figured I'd give it a try- especially since it was one of the
few tanks I owned that was actually still in hydro at the time. 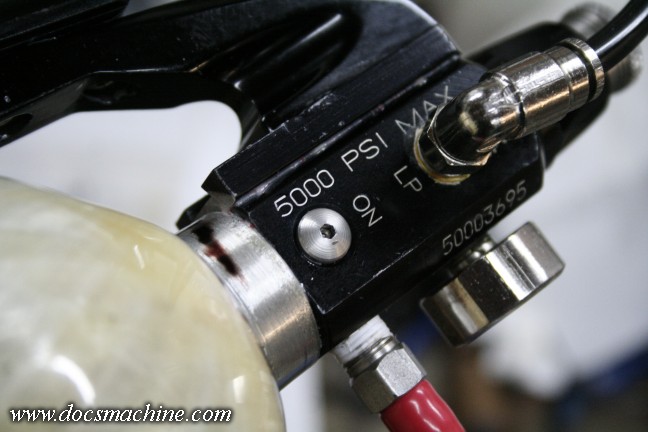 Naturally, when I went to fill it to 3K for the first time, the fill nipple leaked. Only slightly, but a definite leak. No biggie, I figured,
I'd just live with it. That is, 'til just after my first game, when an O-ring in the on-off blew out, dumping the tank dry in about
a minute and a half. Thankfully I'd brought a small "field kit" I'd put together over the summer, and so I had a selection of
O-rings on hand. I'd never been into the on-off on a Dyna before, however, so I had to do the usual exploratory surgery.
Did I mention it was kind of dark in there?

I popped it open, found the bad O-ring (it was almost crumbling) and put the button back together...
or at least, I thought I did. In the dim light, I'd missed how one of the spools must have flipped
as I pushed it out into my palm, so I misassembled it. And now, I could fill the tank, but no air
would go into the reg, no matter where the button was pushed.

So now I had to crack open the fill nipple to bleed the tank, so I could open up the on-off again without
risking shooting parts across the room. Or into my eyeball.

Once cracked and safely vented- which took several minutes, I didn't want to risk blowing the last thread or
two out of the fill nipple- I rechecked the button assembly (with a flashlight) found my mistake, reassembled it,
and since it was already open, I swapped the O-ring in the fill nipple as well.

In those particular sizes, I only had black rubber O-rings rather than urethane, but they got me through the day.
I filled back up, re-chronoed, and got back into play. 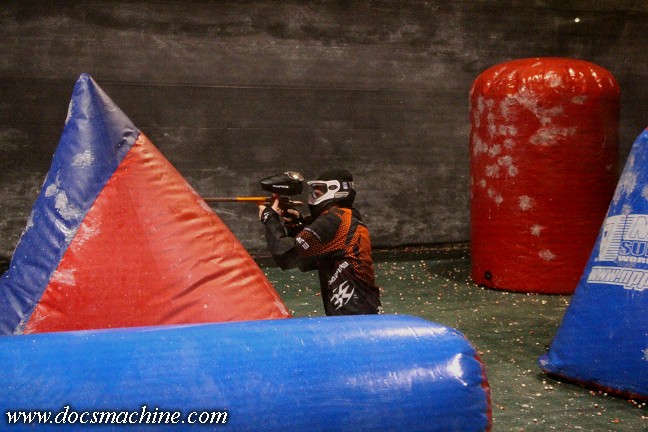 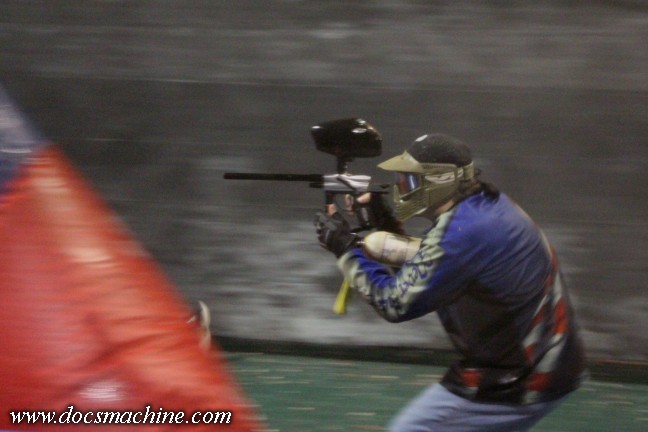 Two or three games later, the reg started leaking again, just as another game was about to start.
The ref wanted to know if I was going to sit out, but looking at my gauge, I figured
I had about 90 seconds of air left. No! Just start the damn game!

Afterward, I saw that the air was coming from the adjuster, so once it was empty again- thank the Gods of Paintball
for all day air- I pulled it, the mainspring and the primary piston. It's O-ring, too, was starting to crumble: 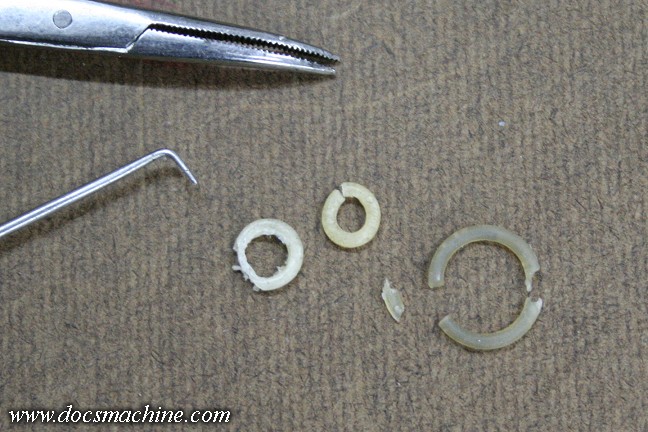 The little yellowish one came out of the fill nipple, the white one at the left came out of the on-off, and the larger one
came off the primary piston. I didn't break 'em getting them out, that's how they were when they were in the reg.

Again, I had a black rubber O-ring in the right size, so once again, I put 'er back together,
refilled the tank, rechronoed, and spent the rest of the day with no troubles whatsoever.
(This all took place in the first hour, maybe hour and a half we were there.) 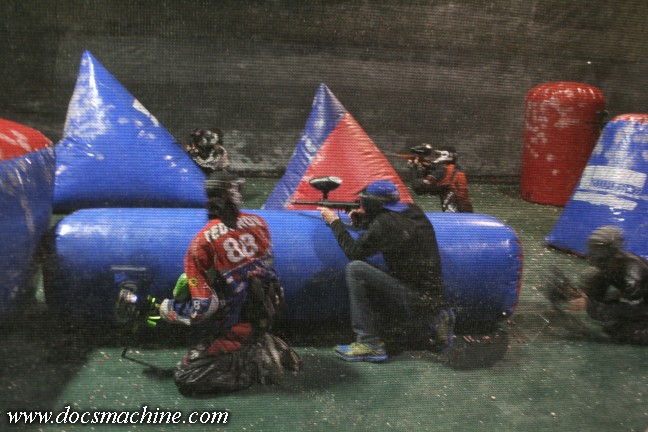 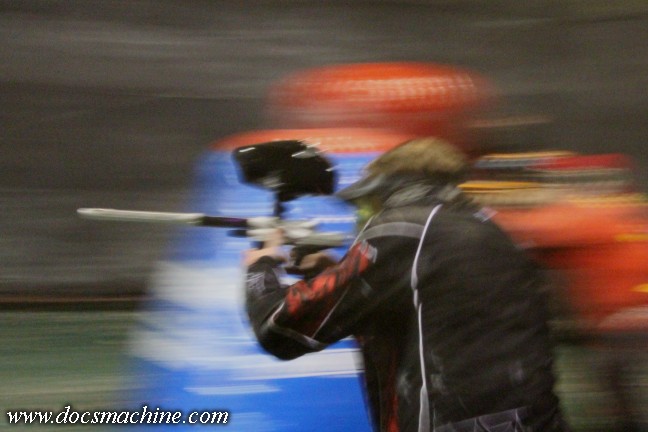 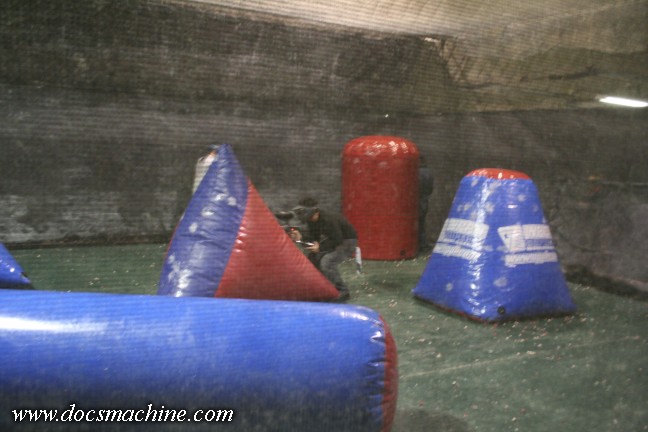 I'd have been fine if I'd left the tried-and-tested Flatline on the gun, but its hydro had expired and I
wanted to be safe and legal. Anyway, those minor hiccups aside, they were a small price to pay
for being able to play some good 'ball in the middle of the winter.