Rebuilding A Junker Cutlass Into A Kinda-Sorta Faux-Four-Two Musclecar, Part 1: 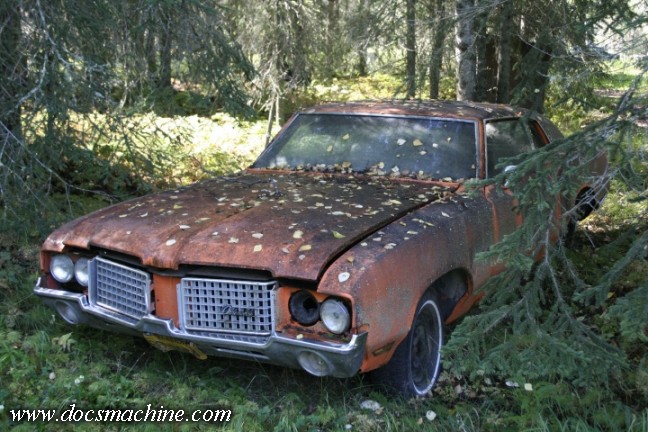 Many years ago, I was given this engineless hulk, by a friend with a towing company, who knew I was into
Oldsmobiles. I didn't have the time or the money to do anything with it at the time (early 2000s) but he said
either I take it or he tows it to the dump. After sitting on it for a long while, finally in 2011 I decided to see if
I could do something with it. The original plan was just to start collecting parts, but as it turned out, a couple
lucky breaks went my way, and I was able to get it rolling much sooner than I expected. 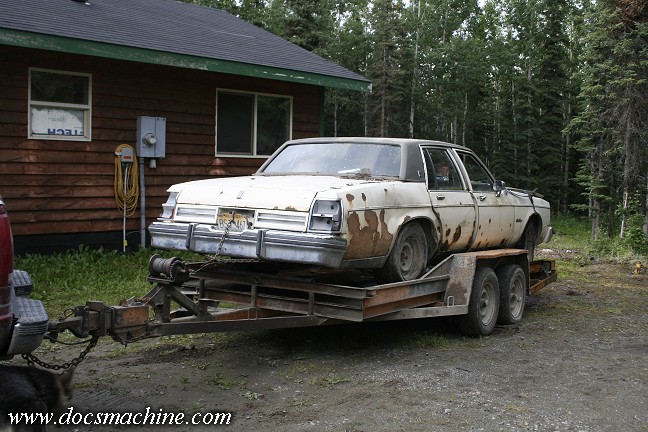 I had the parts for a big-block, but one of the things I wanted was a more modern 4-speed overdrive automatic.
As I had no real plans to drag-race the car, I figured I'd find a cheap THM200-4R, which had the OD I wanted,
and typically have a dual-bolt-pattern bellhousing which would let me bolt it directly to the Olds 455. I asked
around, and ran across a fellow that had this mostly complete '84 98 Royale with a 2004R, that I could
have for the price of towing it away. The car was a wreck, with a smashed windshield and trashed
interior, but the owner insisted that the engine ran great. I didn't believe him. :) 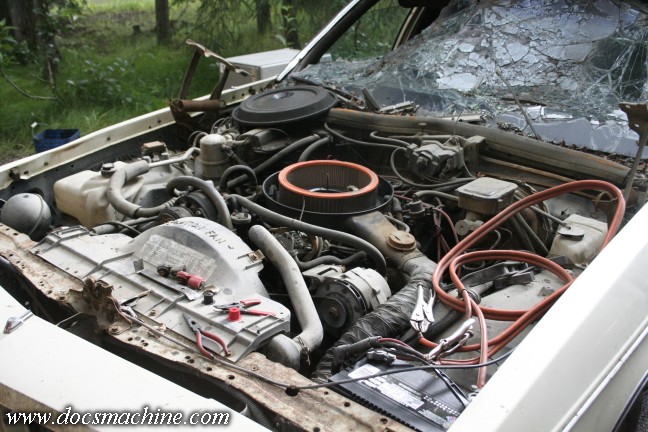 Once I got the junker home, I decided what the heck, it'd just take a few minutes to check out the engine, and
if it was indeed any good... well, maybe it'd make a good temporary engine to get the Cutlass up and rolling
while I built up the big-block. So we hotwired in a good battery (note the Vise-Grips, the cables had been
shredded) dumped some gas in the carb, jammed a screwdriver in the ignition, and gave 'er a try. 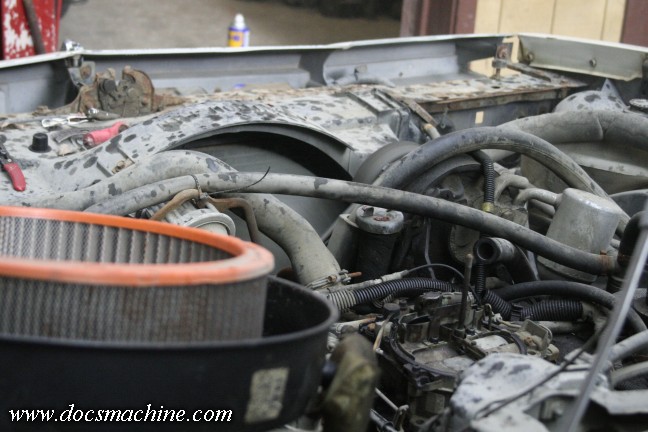 Holy crap, it runs! It fired right up like it'd been running yesterday, blowing no smoke at all, and settled down
to a nice, smooth idle. I was impressed, and decided it was worth giving it a try in the Cutlass- instead of
waiting another year or so to finish collecting parts, I could plunk this engine right in, as all the mounts are
exactly the same, and maybe get the thing rolling this week. 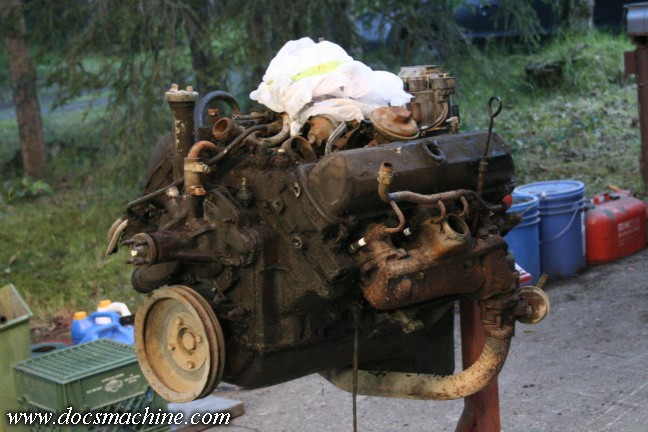 So, as time permitted over the next couple of days, I pulled the engine and transmission, and towed the rest
of the junker off to the salvage yard. (Which, as it was about the peak of the scrap-metal prices at the time,
I got something like $150 for it, which so far meant I'd made $110 in profit so far, and had a good working
engine and trans to boot. :) ) 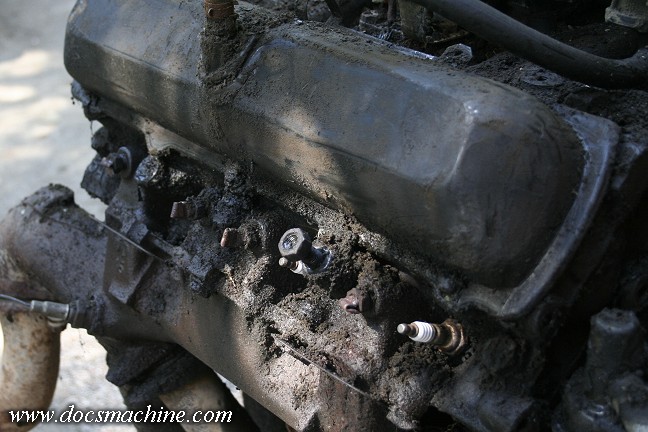 The engine was pretty seriously filthy, with lots of oily grime, and being an '84, was of course also covered
with about fifty pounds of antique emissions crap. As we don't have IM up here, and both the engine and car
are older than 25 years even if we did, I proceeded to unbolt, remove or cut off all the unnecessary junk,
and plug any and all reamining holes, ports, vents and other orifices. 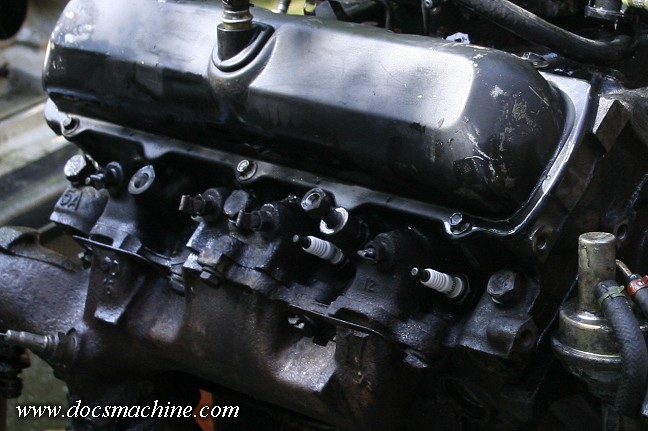 I then scraped as much of the oily gunk off as I could, and pressure-washed and degreased it 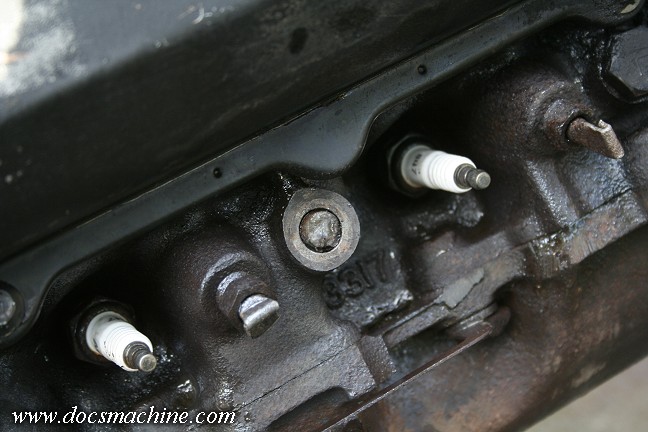 Which revealed this interesting bit- the hex of one of the head bolts appeared to have broken off. Most likely
a factory flaw in the bolt, as this thing barely has 8:1 compression and was of course not supercharged. 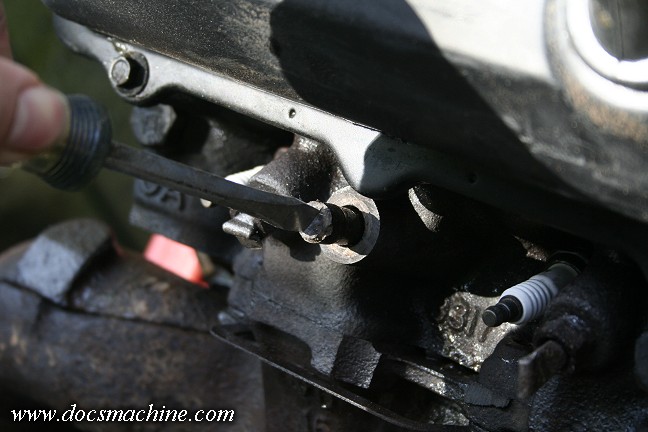 I used a Dremel with a cut-off whell to simply grind a slot in the end of the bolt, and just used a screwdriver
to turn it out. Without the head, there was no torque on it, and it turned easy. 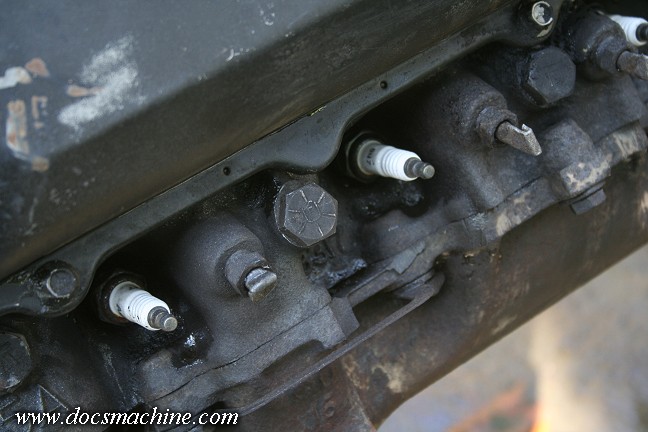 Fortunately I'm a packrat, and I had a ready supply of extrta Oldsmobile-specific head bolts. I found one
the right length, oiled it, slipped it in, and torqued it to 85 ft/lb.