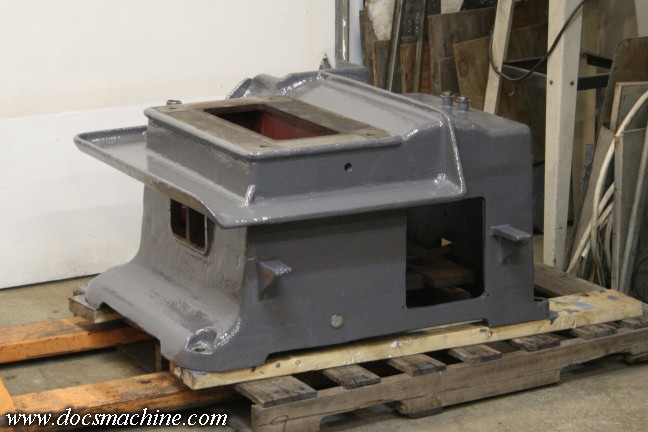 The headstock end base was now cleaned, degreased, and the crack had been welded, so it was time
for a couple coats of alkyd enamel paint, and once that was dry, I could begin reassembly. 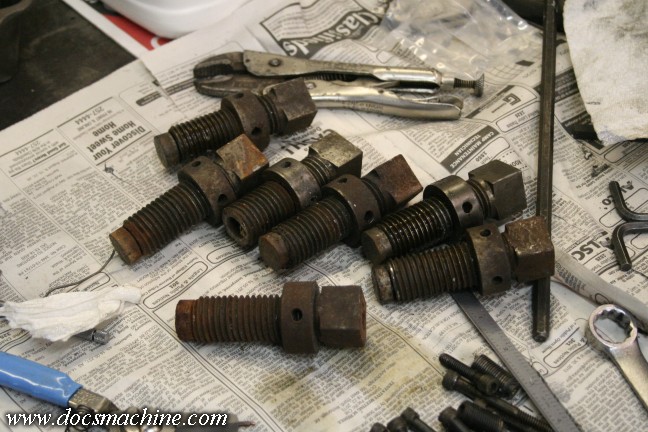 Each corner of the base castings has a large leveling/adjusting screw, all of which were somewhat
rusty and in need of attention. In several cases, the bottom-most thread had been damaged by sitting
on a concrete floor, and needed to be filed back into shape. 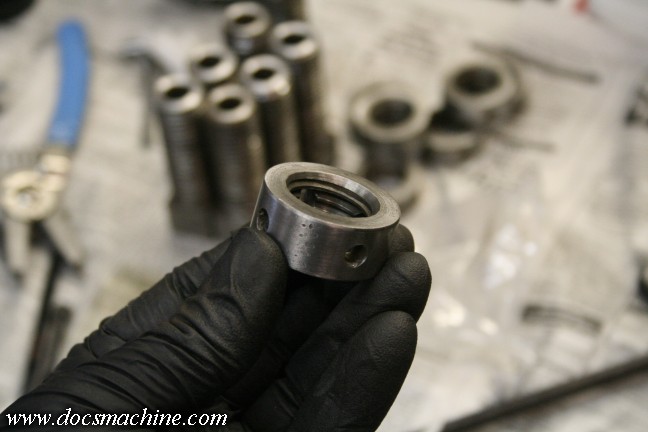 Each screw also has a thick locking ring- the screws are also used to level the lathe,
and after adjusting, will need to be locked in place to it stays that way. 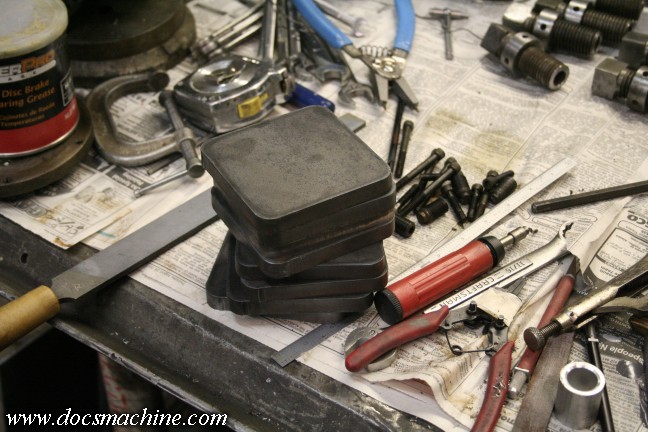 I decided to add some wide pads for the screws to sit on, in order to reduce the possibility of
damage to the floor, so I had a friend cut some 4" rounded squares out of 1/2" steel plate for me. 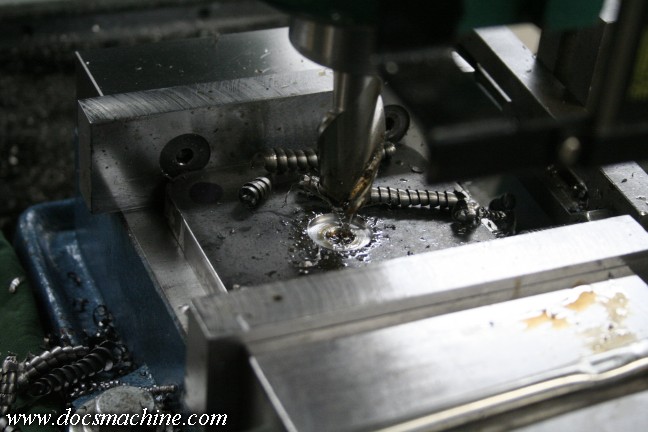 In the center of each, I counterbored a shallow 7/8" diameter recess,
simply by slowly plunging an endmill. 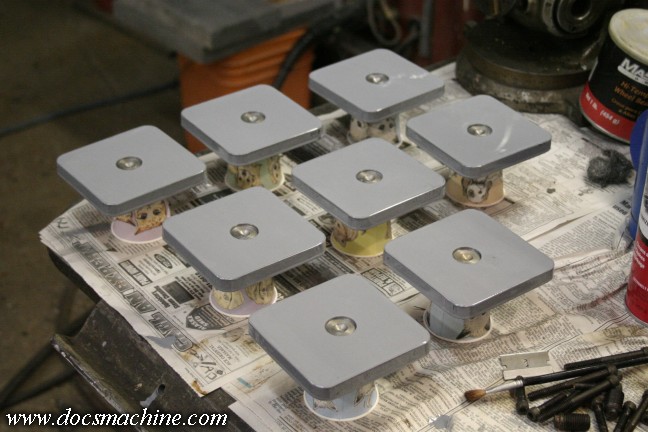 After that, I gave each one a coat of grey POR-15 paint. 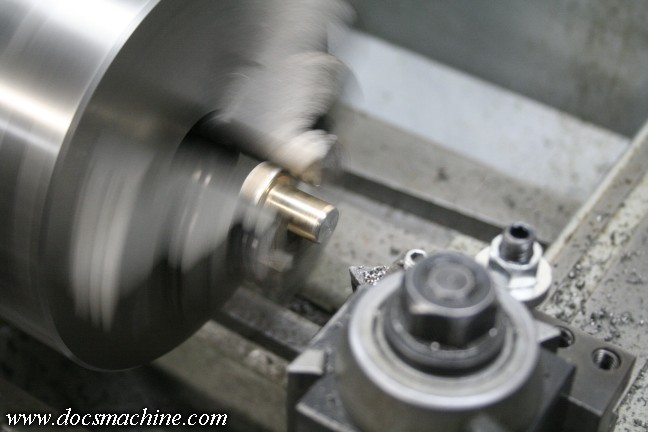 Each of the big leveling screws are hollow- some people think that's so the lathe can be bolted to the floor.
I'm told that's not the case- the holes are only to bolt it into it's original shipping crate, and when in place on the floor,
should simply be levelled, but not bolted down. Someone before me, however, had inserted short 1/2" bolts as "feet"
into the bottom of each levelling screw. I liked the idea, but the old bolts were badly damaged, so I replaced them
with sections cut down from some new Grade-8 bolts. I simply cut the threaded part off, chamfered the remaining
shank, and then rounded the hex head slightly so that it would fit into the new plate recesses. 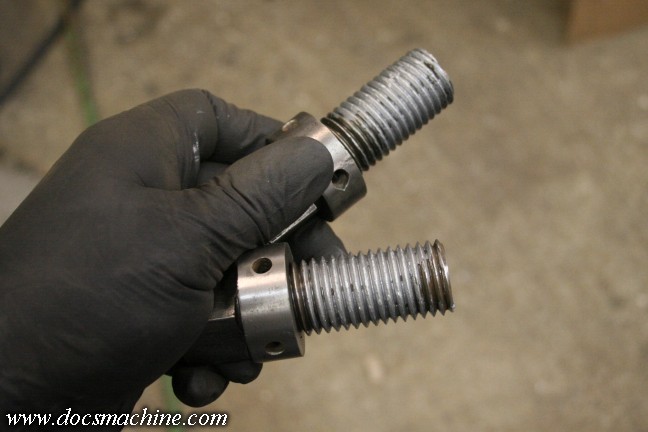 Just before installing, I gave each screw a light coat of anti-seize. I wasn't worried about them
rusting into place, but I did want a little lubrication as they're turned during adjustment. 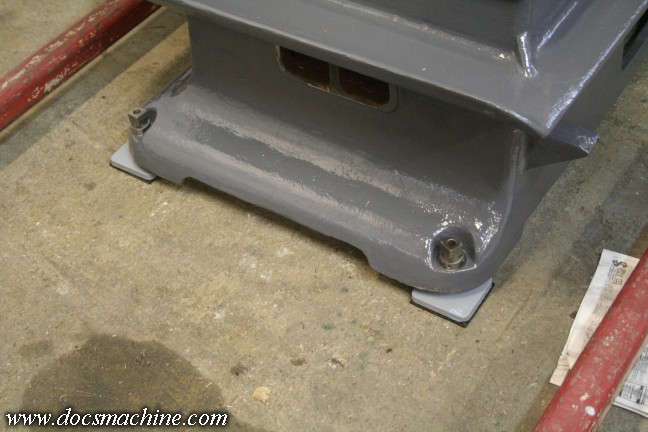 As luck would have it, I also had some 4" square rubber machine pads I'd picked up from a retiring machinist.
I put these under the steel pads, and set the levelling screws- and the insert bolt head- into the recess on the plate.
After all eight were in place, it was an easy matter to roughly level the two castings to each other. 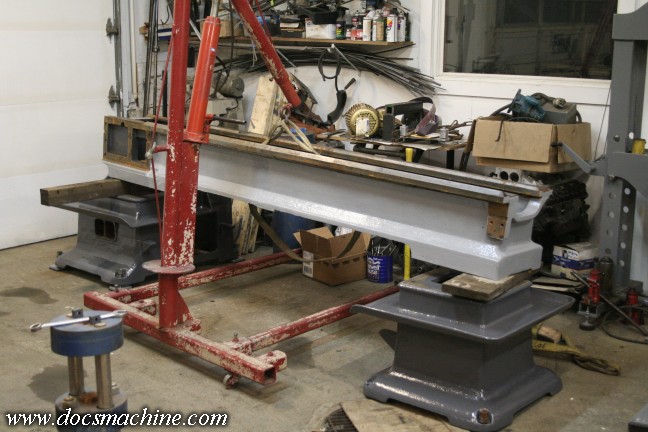 After both bases were somewhat square to each other, I set the bed on top, with some dunnage for
cushioning, while I painted it. First a lighter layer of primer, then a couple coats of the dark grey. 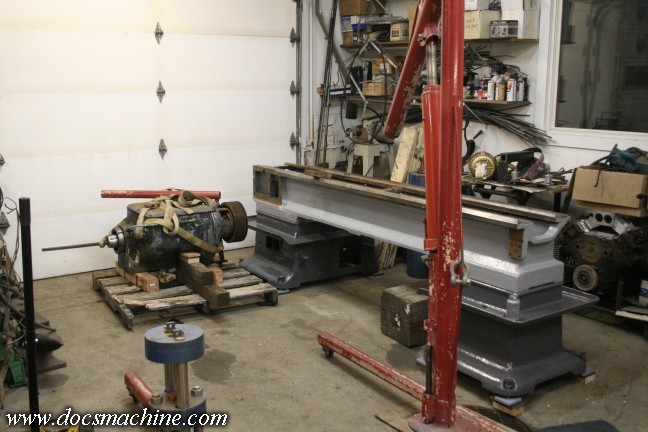 At this point, winter had set in, and in preparation, I rolled the headstock inside to warm up.
And I now have the bed bolted into place on both bases- note the additional blocks needed
under the tailstock end, to compensate for the tilt of the floor toward the drain. 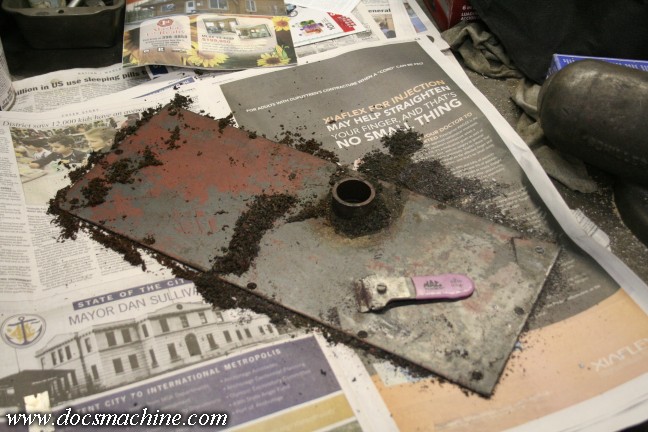 Now, before anything else can be assembled onto the bases-and-bed, I needed to install the
cover over the headstock-end oil reservoir. I scraped off most of the grunge and the old paint,
and degreased it in preparation for paint. 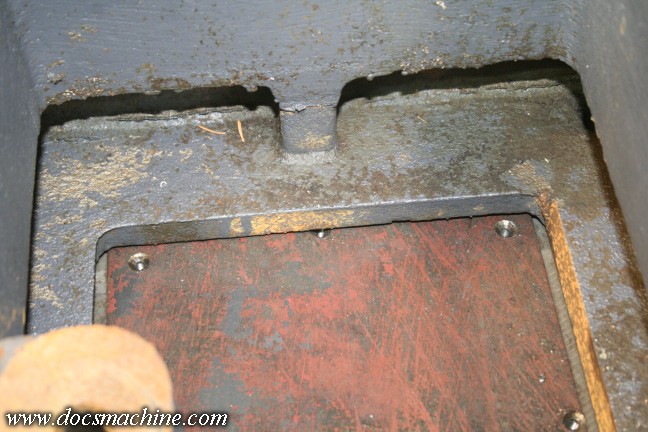 At the time, I had assumed the cover could be installed or removed with the base and bed bolted together.
I was mistaken, however- all the screws were accessible except for this one. I could have simply unbolted the
bed again, as nothing else had been installed, but I liked the idea of being able to access this panel without
having to do so. (Despite the fact one should almost never actually have to do so.) 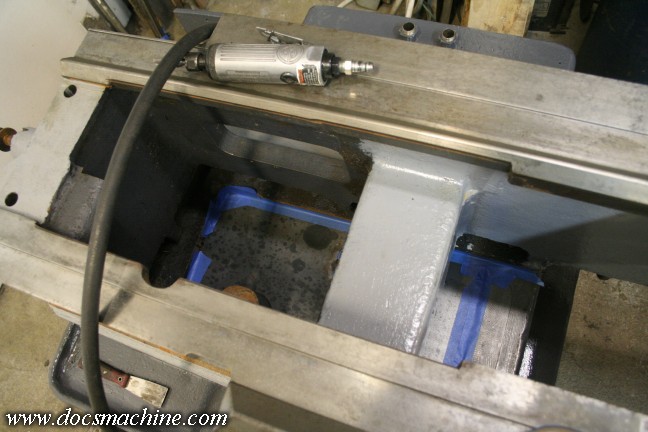 Fortunately it's a simple mod- I taped off the gaps to control the swarf, and used an
air grinder and rotary file to put a notch over just that one screw hole. 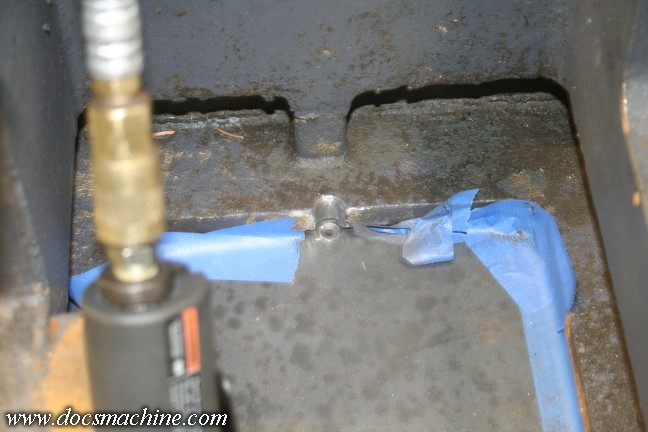 Just as easy as that. A vacuum took care of the debris, and a magnet double-checked
so I wouldn't dump anything nasty into the oil reservoir. 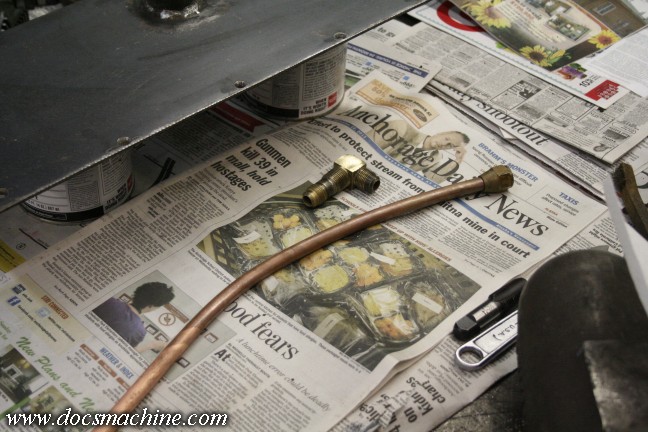 While I was giving the cover a coat of paint, I also installed the oil pick-up tube. 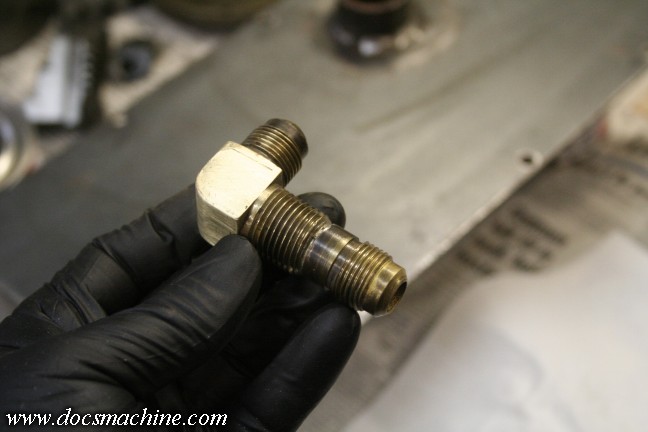 The factory piping, from what I've seen in pictures online, is usually threaded black iron pipe. This machine
came with a replacement oil pump, and flared soft-copper tubing, so I suspect this is not an original fitting.
It appears somebody turned down a flare fitting and soldered it into the pipe-thread end of a brass elbow-
It's a bit odd, but it works, and I see no reason at the moment to change it. 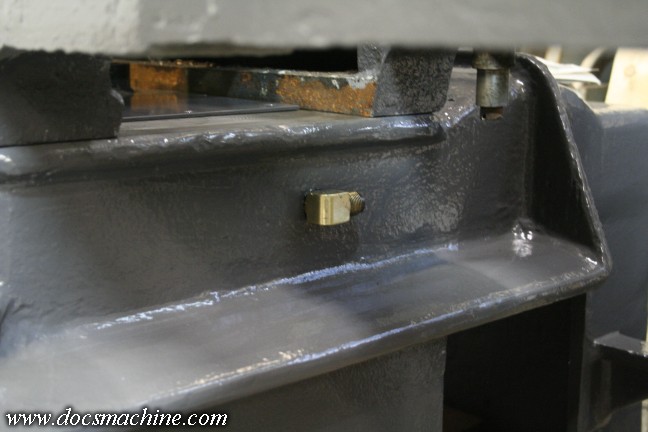 The fitting threads into the side of the headstock base casting like so, and will
eventually have new soft-copper tubing to lead up to the oil pump. 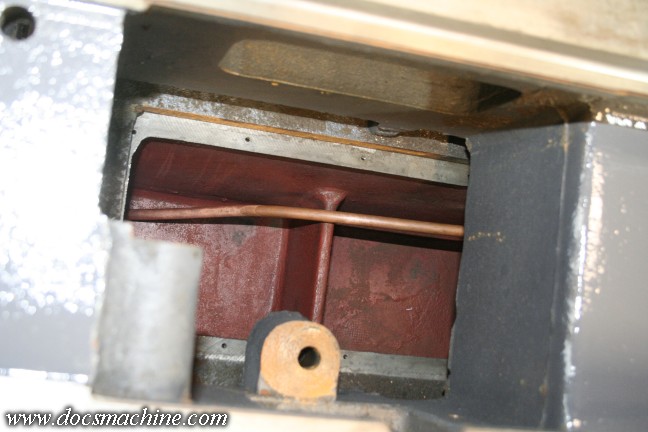 On the inside, a long draw tube is attached to the inner flared end of the fitting, and leads to the
left-side reservoir. The headstock drains into the right side sump, and eventually spills over into
the left side. This gives a chance for any grit or debris to settle, before being pumped back through. 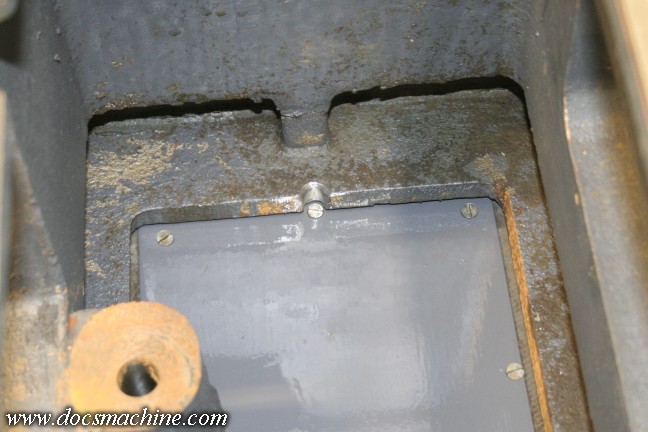 And, with those fittings in place and the cover painted, it was time to make sure
everything was secure, and close it all up. Next up, the headstock itself!