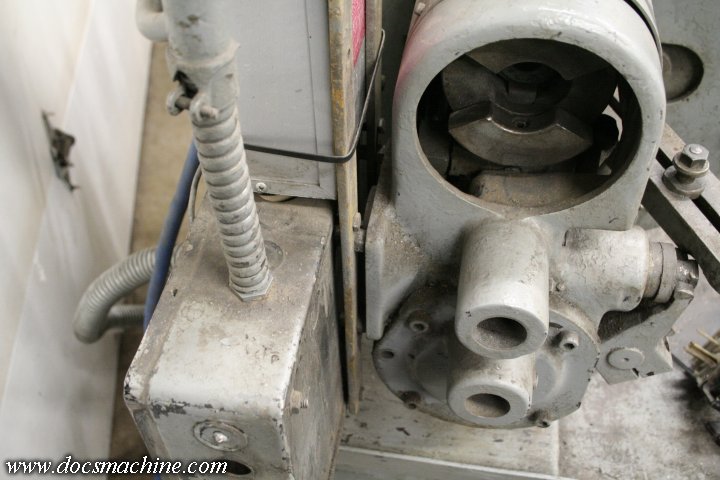 The standard version of this model of lathe comes with a powered combined collet closer and bar feeder mechanism.
An electric motor operates the system, which first opens the collet, then cycles the bar feed to pull the stock in a
certain adjustable distance, and then closes the collet again.

This particular version, however, arrived missing that motor, which had clearly been gone a long time.
Instead, somebody had mounted the contactor box and static converter to the boss where the
motor was supposed to go. 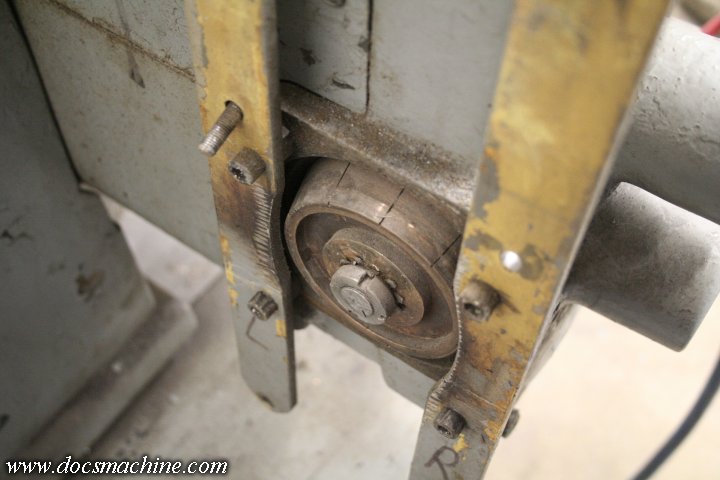 I removed (but didn't disconnect) the electrical housings, which revealed half of the "cone clutch"
which allowed the motor to drive the mechanism. 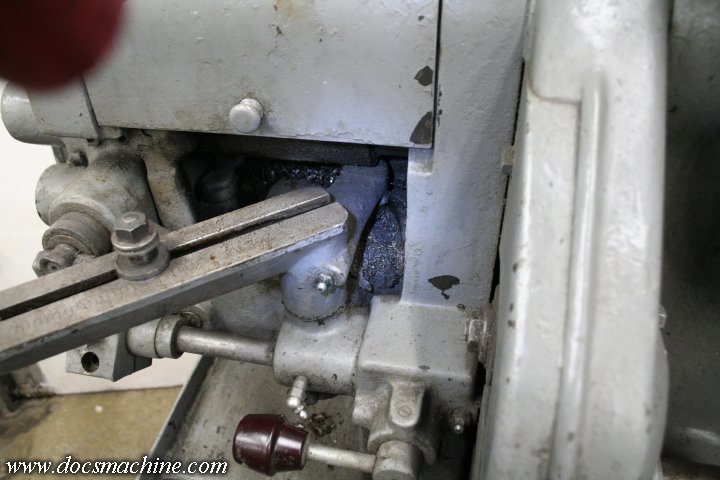 The motor, I believe, would run constantly, and when the operator engaged the clutch, a worm gear would
turn this "cam drum", the groove of which can be seen here in the spot from a bluish LED flashlight. 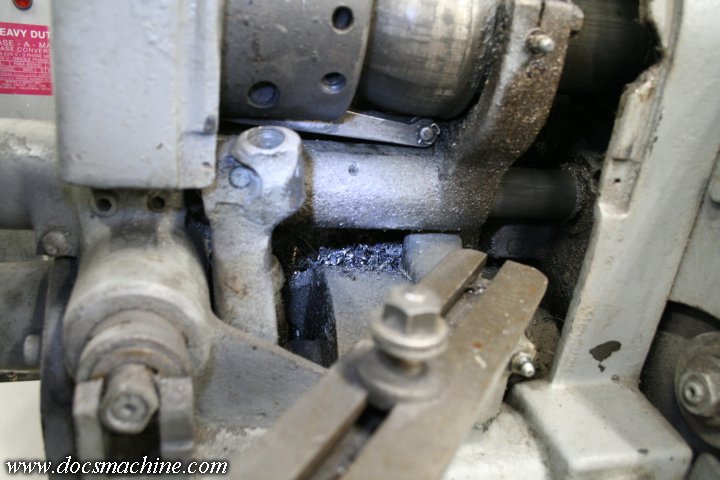 A cam "point" on the end of the drum would then move this "fork" assembly backwards or forwards, to open and close
the collet. When I hand-cycled it, it clearly hadn't been used in some time, although the lathe itself HAD been used,
owing to the significant buildup of swarf and ships and other debris in the mechanism. So clearly there was
a way to use the collet closer, even without the motor. 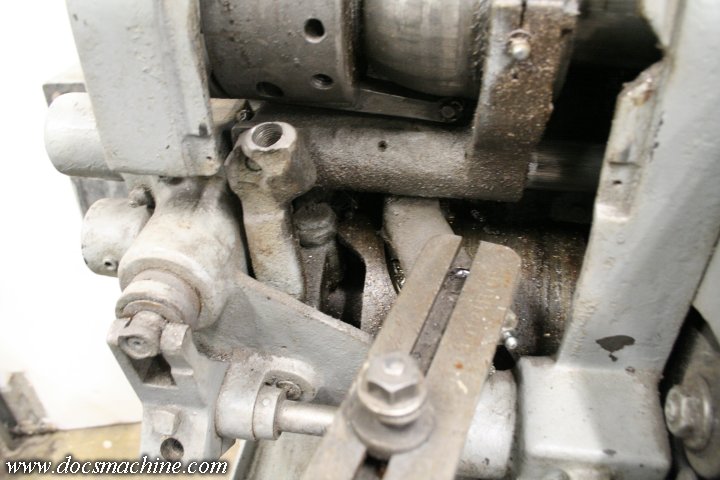 The slotted arm in front is part of the bar-puller system, the barely-seen graduations let you adjust how far it pulls
the bar during it's cycle, and the yoke assembly, kind of mid-high-center in the photo, is the device that actuates
the collet closer. The hole towards the left originally had a small arm screwed into it, for use while setting
the bar-pull and collet tension. The hole is badly wallowed out, and was apparently the way one or more
previous owners worked the collet closer. But, you can't have a lever in there- even if the threads weren't
destroyed- and still be able to close the cover, so obviously we're going to have to modify something. 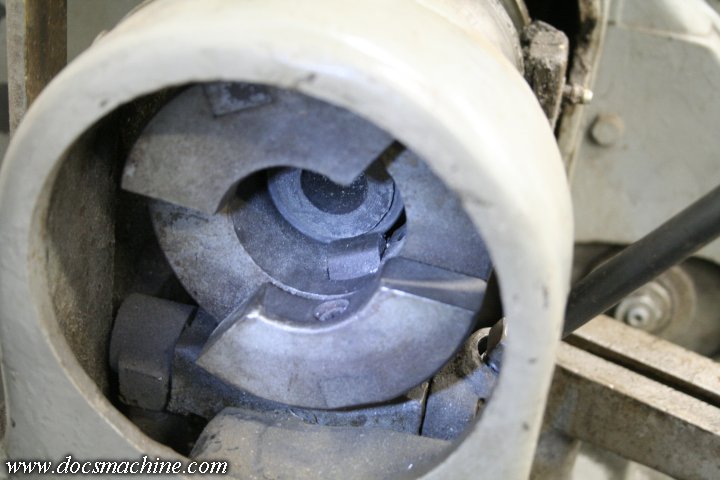 The arms of the collet closer push on a sort of 'spool' inside the spindle, and that
spool pushes on a tube, which then pushes on that collet adapter seen earlier.
Kind of complicated, yes, but allows the same spindle to use multiple
different kinds of collets, or even 'master' collets with pad inserts. 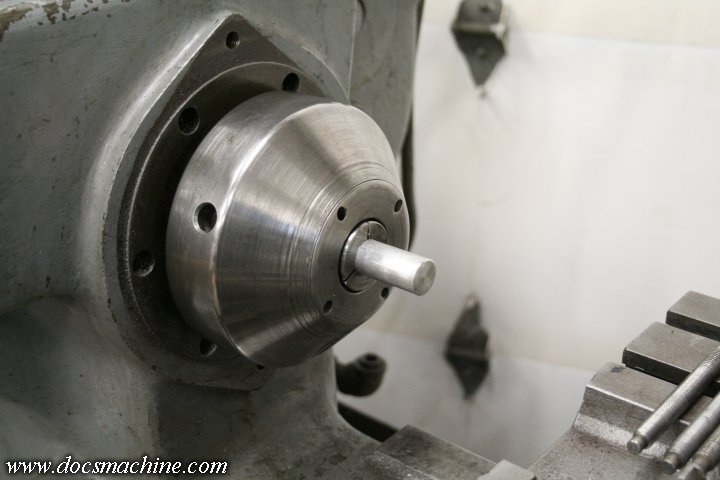 The collet sort of 'snaps' into the spindle nose, which is a big, beefy, heavy-duty piece
of steel. And since the inner sleeve moves but the collet doesn't, it acts as a
"dead length" system, where the workpiece doesn't move when tightened. 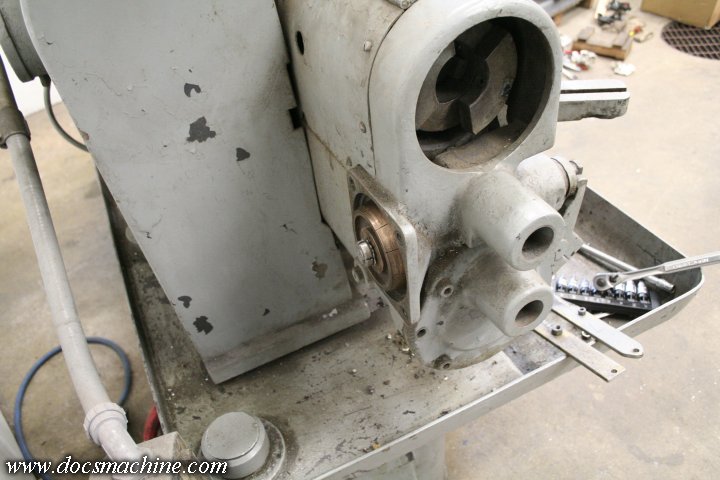 Anyway, it was time to take it apart and do a little inventing. I pulled the mounting bars off... 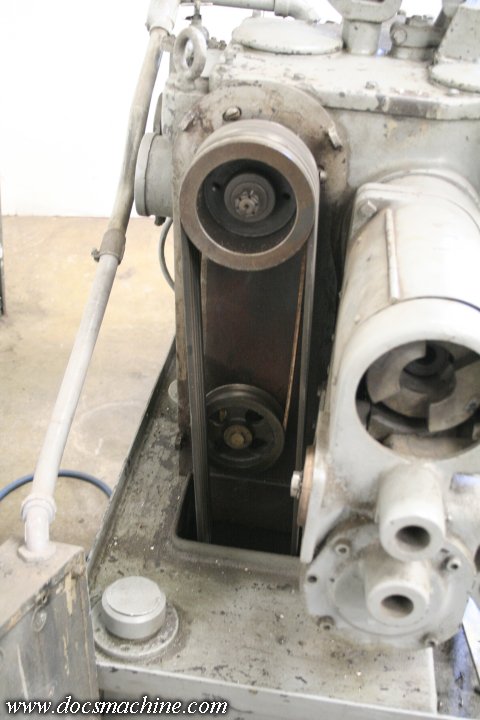 And then, to get access to some of the screws that hold the hinged cover on,
I had to take the belt cover off. 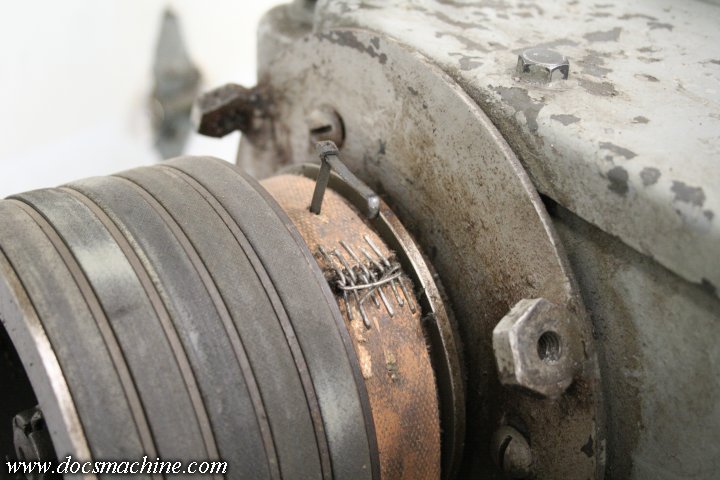 And under there I found a badly-spliced flat belt used to drive the oil pump.
Almost certainly not original, and it works, but I'll probably still replace it. 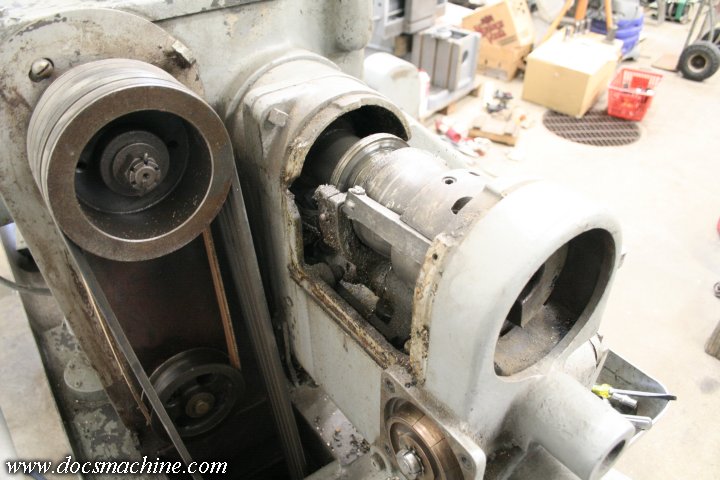 With that, the aforementioned hinged cover could come off, which allows access to the mechanism mounting bolts.

All text, photos and graphics Copyright 1998- 2020, Doc's Machine & Airsmith Services. All Rights Reserved.
Information contained in these pages is for reference and entertainment purposes only.  Our methods are not always the best,
quickest, safest, or even the correct ones. It's up to you to know how to use your own machines and tools.
Keep your fingers away from the spinny blades o' death and you should be all right.